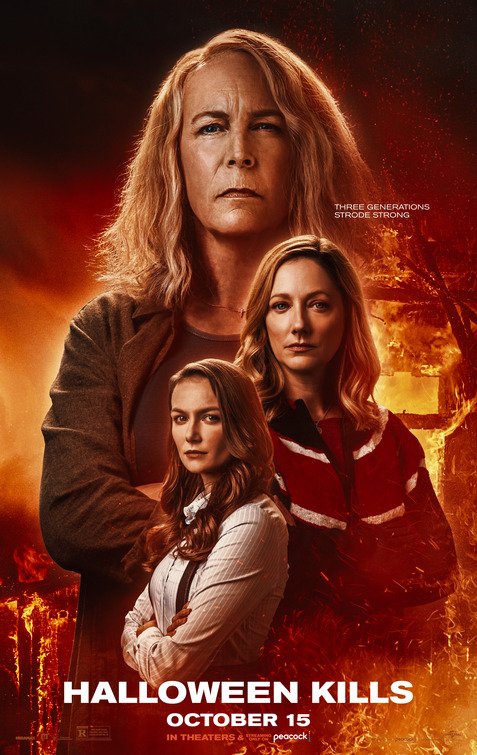 HALLOWEEN KILLS continues the saga of the battle of Laurie Strode and her daughter and granddaughter against Michael Myers, the knife-wielding masked killer. This time all the townspeople join the battle. Laurie’s daughter, Karen, and granddaughter, Allyson, take Laurie to the hospital after being stabbed by Michael in the last movie. They find out Michael survived the fire Laurie started in her house and slaughtered all the firemen that came to fight it. Meanwhile, Tommy Doyle, the boy who Laurie saved from Michael in the first movie, promises to lead the townspeople in a manhunt to find Michael and kill him. Will they stop Michael? Can Michael be stopped?

Unlike the last movie, HALLOWEEN KILLS just turns into a bloody slaughter-fest. In this sequel, Michael doesn’t just kill individual people, he kills groups of people. In addition to scenes featuring two homosexual men, the movie contains lots of strong foul language. The movie is capped by a corny proclamation during the climax that Michael is evil incarnate and impossible to kill or stop. HALLOWEEN KILLS is just too depressing and ultimately pointless.

(FRFR, B, HoHo, V, LLL, VVV, S, A, MM):
Dominant Worldview and Other Worldview Content/Elements:
Strong, depressing false religious worldview depicts a vicious, relentless psychotic killer as evil incarnate, and a main character near the end overtly says this and surmises that the killer can’t be killed or destroyed but becomes more powerful the more people he kills, and the situation is viewed as hopeless as killer continues his murderous rampage, with some moral elements about trying to stop the psychotic killer, and several scenes feature a male homosexual couple who live together, and a young man or older teenager wears women’s clothes and lipstick for Halloween;
Foul Language:
About 61 obscenities (including many “f” words), seven GD profanities, two Jesus profanities, and six light profanities;
Violence:
Graphic, extreme, bloody, and scary violence includes people’s throats are slit, people are stabbed in the eye or the head, villain slams pickaxe into people, villain stabs multiple people to death (sometimes multiple times), man jumps off top floor of hospital building and images are shown of half his head and a dismembered arm, villain grabs people by the throat, villain slams people’s heads hard against objects as they fight, ;
Sex:
No sex scenes, but there are scenes featuring a male homosexual couple who live together and call one another honey;
Nudity:
No nudity, but some female cleavage;
Alcohol Use:
Alcohol use at a bar and two men share a drink at home;
Smoking and/or Drug Use and Abuse:
No smoking or drugs; and,
Miscellaneous Immorality:
Townspeople become a crazed mob inside a hospital, and a few children bully another boy but act like his friend when a police car appears.

HALLOWEEN KILLS continues the saga of the battle of Laurie Strode and her daughter and granddaughter against Michael Myers, the relentless knife-wielding masked killer, but this time all the townspeople join the battle. Sadly, HALLOWEEN KILLS doesn’t hand viewers much of anything beyond a virtually endless, depressing slew of multiple bloody murders, accompanied by lots of strong foul language and capped by a final corny proclamation that trying to stop Michael is hopelessly impossible because he’s evil incarnate.

After a flashback to Michael’s original rampage in 1978, the movie opens where the previous movie stopped, on Halloween 2018, 40 years later. Laurie has a knife wound in her stomach. Accompanied by her daughter, Karen, and her granddaughter, Allyson, Laurie is being rushed to the hospital. So is Sheriff Hawkins, who failed to stop Michael in 1978. Meanwhile, Michael is trapped in the basement of Laurie’s home, which Laurie set on fire. However, the fire department is racing to the home to douse the fire, with Laurie yelling, to no avail, “Let it burn!”

Of course, although Laurie thinks Michael’s burning in the fire, he’s actually very much alive. So, when one of the firemen falls through the floor of the kitchen, he encounters Michael, who promptly kills the fireman with the man’s own pickaxe. A second fireman unknowingly gives Michael a hand up out of the basement, and Michael brutally murders him and all the other firefighters outside.

While this is happening, Tommy Doyle, the little boy who Laurie saved from Michael in 1978, is at the local watering hole, aka saloon, leading a memorial for the 1978 victims and potential victims. The victims include the parents of the teenagers Michael killed in 1978, plus a man who, as a boy in 1978, encountered a fleeing Michael on the streets, but was saved when a police car suddenly appeared. The police chased Michael back to his old family home, where he grabbed one policeman, who was accidentally shot dead by a young Sheriff Hawkins. Hawkins escaped outside, where a bunch of policemen trained their guns on Michael when he exited the front door. Dr. Loomis, Michael’s psychiatrist for 15 years, tried to shoot Michael in the head, but the local sheriff at the time stopped him.

Back at the saloon in 2018, the townspeople learn that Michael and another crazy man had escaped a wrecked transport bus that was taking them from their old facility, which had been scheduled for demolition, to a newer one. Tommy promises everyone at the bar that he will lead a posse of people to hunt Michael and kill him once and for all.

Eventually, Laurie’s granddaughter joins Tommy’s posse while Laurie and her daughter wait at the hospital for Michael to appear. However, Michael heads once again to his former family home, which has been bought and renovated by two homosexual men, Big John and Little John.

Will Tommy, Laurie’s granddaughter and the townspeople catch Michael? Will they kill Michael? Better yet, can Michael ever really be killed???

Unlike the last movie, HALLOWEEN KILLS just turns into a bloody slaughter-fest. In this sequel, Michael doesn’t just kill individual people, he kills groups of people. The firemen in the first act were only the beginning. In addition to scenes featuring the two homosexual men, the movie contains lots of strong foul language. Also, the movie is capped by a corny proclamation during the climax that Michael is evil incarnate and impossible to kill or stop.

All in all, HALLOWEEN KILLS is just too depressing and ultimately pointless.