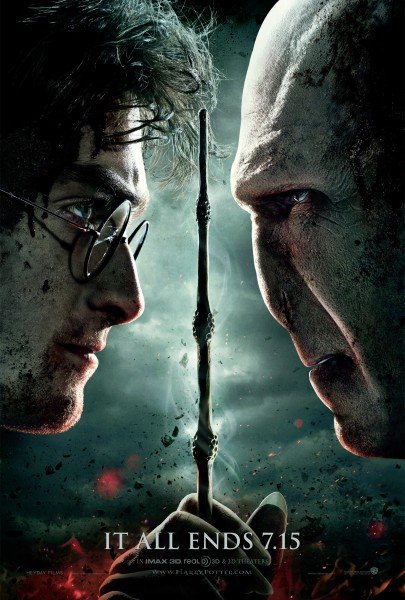 HARRY POTTER AND THE DEATHLY HALLOWS PART II opens with Harry Potter and his two friends, Ron and Hermione, tracking down another of the special objects that contains parts of the evil sorcerer Voldemort’s dark soul. Voldemort uses these hidden objects to re-construct his snake-like body multiple times. If they can destroy these parts of Voldermort’s soul, they have a good chance of killing Voldermort himself for good. Eventually, the trail leads back to their school, Hogwarts, where the final showdown between Harry and Voldermort occurs.

The final chapter to Harry Potter’s adventures contains some of the most exciting, heartfelt moments in the whole series. That said, PART II doesn’t have quite the emotional heft and excitement of the seventh book’s ending. Also, although the movie does have some of the strongest overt redemptive and Christian allegorical elements from the book, it leaves out others. Thus, the book’s message that love is what really conquers the villain’s pride, greed and disdain for goodness is diluted. In fact, despite its overt redemptive aspects, HARRY POTTER AND THE DEATHLY HALLOWS PART II almost turns the final confrontation scene into just a spectacular magical showdown.

(PaPa, OO, CC, BB, ACACAC, FR, L, VV, N, A, M) Mixed pagan worldview with some strong occult elements that include witchcraft and getting help from speaking to ghosts and some Christian allegorical elements that are surprisingly overt and redemptive and will remind some of Christ’s sacrifice on the Cross and His resurrection (a major scene takes place in a passage leading to the afterlife that reminds one character of King’s Cross station in London named after Jesus), plus some strong moral elements of fighting a tyrannical evil that reminds one of the worst parts of national socialism and communism and a reference to what sounds like the false religion of works righteousness; three “h” words, one “b” word and a couple uses of the English swear word “bloody”; strong, sometimes intense action violence as “good” battles evil includes magical explosions and attacks, fireball from magical spell endangers teenagers and swallows one villainous teenager, sounds of a large evil snake striking one character are heard and some blood is scene on a window and later on his neck, people encounter a dragon that’s upset and tries to get them, people fall, people die, stone soldiers fight giants, giant spiders attack people but you can’t really see much of that, snake’s head chopped off, parts of dragon’s body smashes into rooftops, villain tries to kill heroic teenager, sorcerers battle one another; no sex but two kisses between two teenage couples; upper male nudity when two teenage boys put on dry pullovers; teenagers reach for what looks like some kind of beer on a table with some food; no smoking; and, breaking and entering, greed, arrogance, and disdain for love and goodness but mostly rebuked.

PART II of HARRY POTTER AND THE DEATHLY HALLOWS still has the occult elements that made the series such a controversial phenomenon, but this conclusion to the youthful adventures of Harry Potter contains some of the strongest redemptive aspects from the books. In fact, because the movie is a stripped down version of the last third of the seventh and final book, those redemptive elements perhaps stand out even more clearly in the movie. The problem is, the emotional highpoints from the book that made it into the movie get a bit lost in all the frenetic action. Also, the book’s message about the power of love is slightly diluted. Viewers who haven’t read the books may feel a little lost and bewildered.

The movie opens with the really evil, serpent-like head villain Voldemort finding the Elder Wand, which is allegedly the most powerful magic wand ever made. Cut to Harry Potter and his friends, Ron and Hermione, still looking for the remaining magical items (called horcruxes) that Voldemort has used to store parts of his soul to make sure he can always magically resurrect or restore himself if his body gets destroyed or terribly damaged. Apparently, there are only three remaining horcruxes.

Harry thinks one of the objects is hidden in the vault of Voldemort’s female minion Bellatrix Lestrange. All magical vaults are guarded by little elfish goblins, the bankers in the world of witches and warlocks. Harry, Ron and Hermione sneak into the vault with the help of a goblin, in exchange for a magical sword Harry has.

When they get to the vault, which is located deep in the bowels of the earth, they discover the vault is also guarded by a dragon. The goblins have trained the dragon, however, with some bells, so Harry and his friends are able to enter the vault and find the hidden horcrux, but not without some trouble. Even so, an alarm has been raised, so Harry, Ron and Hermione have to hop on the dragon and release it to escape with their lives.

With help from his friends, Harry figures out Voldemort’s nasty pet snake is the last horcrux and that the other remaining one is hidden away in a vast storeroom at their magic school, Hogwarts. They also believe that these bits of Voldemort’s soul can only be destroyed by teeth from the skeleton of the basilisk snake in the Hogwarts basement, which Harry killed in the second book and movie.

Harry and his friends have two problems. First, running Hogwarts now is Professor Snape, Harry’s old school nemesis and the man who killed his friend Dumbledore. Second, Voldemort is gathering his minions to storm Hogwarts for the final showdown with Harry. Professor Snape, however, is carrying a few important, surprising secrets that may tip the outcome in Harry’s favor.

PART II pulls out all the stops in telling the story of the final showdown between Harry and Voldemort. It’s probably the most exciting of all the HARRY POTTER movies. And, along with the ending to PART I when the lovable house elf, Dobby, gets killed, it’s the most emotionally powerful.

That said, except for an important subplot concerning Harry’s friends Neville Longbottom and Luna Lovegood, the movie gives short shrift to the battles between Harry’s other supporters and Voldemort’s minions. Here, a couple tragic, heartfelt and important outcomes from the book get lost. Thus, for example, if you compare this movie to the final movie in the LORD OF THE RINGS trilogy, RETURN OF THE KING, RETURN OF THE KING is, hands down, the much better, more satisfying movie.

Also, more importantly, the resolution of the Professor Snape subplot, which is perhaps among the most emotionally powerful in the whole series, comes too much out of the blue in the movie. Consequently, it’s not as wonderfully done and heartfelt as it seemed to be in the book.

Finally, the final duel between Harry and Voldemort that decides their destinies is rather uninteresting, especially when compared with the one in the book. For instance, in the book, there’s far more drama in the final duel, which has some important revelations and a more visually interesting climax. [SPOILER FOLLOWS] Also, ultimately, Voldemort loses to Harry in the book because of his pride in his abilities using witchcraft, his arrogance, his greed for power, and his denial and disdain for the power of love. This really isn’t clear in the movie. Thus, the story’s premise is itself diluted.

The decision to delete this part of the book is very strange, because it fits in perfectly with the other original redemptive, allegorical material from the story that the movie includes. [SPOILERS FOLLOW] For example, in the movie, there are elements of sacrifice and resurrection that recall Jesus Christ’s sacrificial death and resurrection in Holy Scripture. There’s also a major reference to King’s Cross Station in London, which is named after the story of Jesus Christ’s sacrifice on the Cross. Finally, in a waystation leading to an undescribed afterlife, Harry is able to talk with Dumbledore one last time. In that scene, Dumbledore reminds Harry about the power of love, which, in the book but not in the movie, actually impels Harry to offer Voldemort one last chance to repent.

Thus, while HARRY POTTER AND THE DEATHLY HALLOWS PART II retains some of the overt redemptive aspects to the original, the filmmakers clearly don’t fully understand it or take advantage of it. Consequently, their movie is not as unforgettable, dramatic, powerful, and inspiring as it could have been. In fact, the ending, despite its positive aspects, which are many, ultimately comes down to a magical duel between the hero and the villain. In a strange way, this makes the climax seem slightly less redemptive, with a little too much focus on occult witchcraft and empty, impersonal magical pyrotechnics, than the original book on which it’s based. In one sense, HARRY POTTER AND THE DEATHLY HALLOWS PART II is like a Cliff’s Notes edition of the book.

Therefore, once again, MOVIEGUIDE® cannot recommend a HARRY POTTER movie and points instead to Peter Jackson’s extended movie version of THE LORD OF THE RINGS, which is now out on Blu-Ray. Better yet, people should read or re-read LORD OF THE RINGS, C.S. Lewis’s CHRONICLES OF NARNIA books or Tolkein’s follow-up to LORD OF THE RINGS, THE SILMARILLION, which contains a profound, rewarding, redemptive storyline on the fight between good and evil (including the seductive power of evil, arrogance, envy, and greed to pervert the good), the terrible judgment of God and the power of the hope that lies within us.