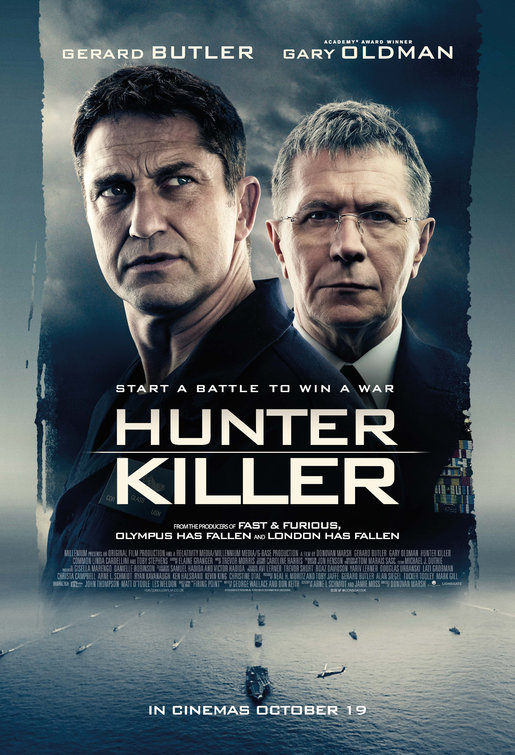 HUNTER KILLER is a military thriller. The USS Arkansas has just made its way deep into the ocean, trying to track a missing vessel. They discover a torpedoed Russian submarine on the ocean floor. Meanwhile, four Navy Seals are on a special operation. They discover that the Russian Minister of Defense has gone rogue, kidnapping the Russian President and ordering the Russian army to attack America. Now, the captain of the USS Arkansas and the four Seals have to team up together to rescue the Russian President from his own people, without having a war on their hands.

HUNTER KILLER caters to those moviegoers who enjoy action movies that need very little thought to follow. It borders on comical because of the overly dramatic script and some poorly delivered lines. There’s very little to keep viewers involved, other than a few action scenes that maintain a bit of excitement. The movie has a strong moral worldview about trying to stop great evil, but it contains some strong obscenities and profanities and some intense, bloody violence. MOVIEGUIDE® advises extreme caution for HUNTER KILLER.

(BBB, C, PP, LL, VV, N, M)
Dominant Worldview and Other Worldview Content/Elements:
Very strong moral worldview with some redemptive elements and a positive view of American servicemen where good triumphs over evil, sacrifice and keeping promises are extolled, and man goes back to rescue his fellow Navy Seal even though it means possible death for himself;
Foul Language:
17 obscenities (including four “f” words) and four GD profanities, plus an obscene gesture;
Violence:
Strong, sometime intense, action violence with some blood includes multiple examples of gunshots and explosions, man is shot through his leg with a moderate amount of blood, many headshots by a sniper, one scene of men getting shot execution style, one stabbing, and a few images that could be disturbing such as a dead body floating in the ocean;
Sex:
No sexual content;
Nudity:
Upper male nudity when one man in boxer shorts gets dressed, and one man lying in his bunk without a shirt;
Alcohol Use:
No alcohol use;
Smoking and/or Drug Use and Abuse:
No smoking or drug use; and,
Miscellaneous Immorality:
Light examples of disrespect to authority although nothing is done out of insubordination, very minor political elements such as one of the Russians commenting about how he isn’t crazy about the fact that it’s American men rescuing them, examples of betrayal and kidnapping.

The military thriller HUNTER KILLER tells what happens when there’s a coup in Russia, and it falls on a few Navy Seals and a submarine captain to rescue the Russian President and prevent a big war from breaking out. Made with high production values and strong positive values, HUNTER KILLER has a poorly written script with overly dramatic lines, intense violence and too much strong foul language, so extreme caution is advised.

Captain Joe Glass has been through the thick of it after years of service to his country on different submarines. Now, he is tasked with captaining the USS Arkansas, trying to find a submarine that’s suddenly off the United States government’s radar/sonar system. Upon finding it, they see that the vessel has been torpedoed, killing every person who was on it. They immediately find that there is another submarine sitting almost directly on top of them, who decides to fire at them. The soldiers on board snap into action, avoiding the torpedoes and taking out the enemy.

Simultaneously, four Navy Seals have been assigned a special operation to learn what they can about what’s happening with the Russian government. Upon their arrival to a Russian army base, they discover that the Minister of Defense has gone rogue, isolating the Russian President and ordering the army to attack America.

Back in Washington, they are trying to decide what action to take, knowing that the Russian government is being sabotaged by the Minister of Defense. If they make the first move, they risk starting a war between the countries, but if they wait, they risk taking some hard hits by the Minister of Defense. They finally decide to arrange a rescue of the Russian President and implore him to help them stop the potential war.

Under the water, the USS Arkansas has stumbled upon a Russian submarine that’s been destroyed. However, Captain Glass sees that there are a few survivors in the vessel, and despite the protests of some of his men, he decides to rescue them. The Russian captain and a few other Russian sailors join the Americans.

After getting the orders to save the Russian President, Glass seeks the help and advice of the Russian captain in order to maneuver through their waters, dodging mines and sound sensitive bombs. The two unlikely partners must put their differences aside to defeat the Minister of Defense and prevent a war between the two countries.

HUNTER KILLER is a movie made with a huge budget and high production value, based on a poorly written script with overly dramatic lines that come off as cheesy and almost comical. The intense action scenes are all that the movie offers to keep viewers invested in the storyline. The emotions feel very forced and unnatural by all the actors, which might boil down to the how the script was formed. The dialogue brings forward the storyline in a very obvious way, and there’s little that happens that’s unpredictable.

This movie does however have redemptive elements in it, including major themes of sacrifice and loyalty. The overarching quest is to team together in order to defeat the evil that’s trying to create a war. There is a high amount of questionable content including a high amount of foul language and obscenities, as well as an exorbitant amount of violence and blood. Because of these elements as well as some disturbing images, Movieguide warrants extreme caution for children.