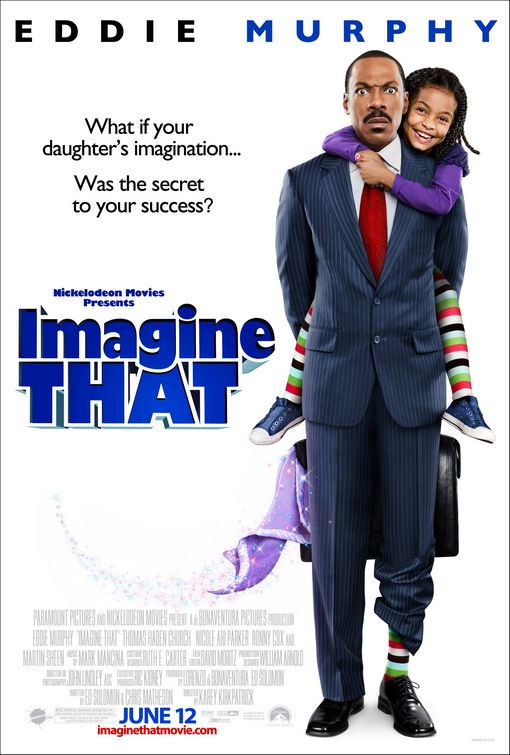 IMAGINE THAT stars Eddie Murphy as Evan, a divorced executive competing inside his company for a promotion. Evan has custody of his daughter Olivia but is too busy to listen to her. By accident, Evan discovers that Olivia’s imaginary friends can actually predict the stock market and the fate of financial companies. At work, Evan must present his plans in order to be considered for a promotion. However, Evan does not have Olivia with him to hear from her imaginary friends. The big presentation also conflicts with Olivia’s choir performance. Evan must decide between his promotion and his daughter.

IMAGINE THAT is a warm, family friendly movie that is big on heart and long on laughs. Eddie Murphy is terrific. Thomas Hayden Church is hysterical as Evan’s rival, who pretends to be Native American. IMAGINE THAT has some light foul language. Also, there is a magical side to its story, although Olivia is the only one who can see or hear her imaginary friends and enter their fantasy world. IMAGINE THAT has strong moral content showing the love that can grow between a father and a daughter. It is a funny, heartwarming movie.

(BB, C, O, Pa, L, V, M) Strong moral worldview wherein a dad decides to value his daughter more than work, with light praying to God and “the Lord,” spoiled by a magical element of daughter’s imaginary friends predicting the future and villain pretends to be a Native American who talks to spirits but it appears to be a phony marketing ploy; two obscenities and six light profanities; light comic violence such as man falls down comically; no sexual content; no nudity; no alcohol use; no smoking; and, lying.

IMAGINE THAT is the story of Evan, a financial wiz kid competing inside his company for a promotion, only to discover that he needs his daughter’s help in order to succeed. Evan has custody of his daughter for a week and, as usual, is too busy to listen to her. She has a special blanket and imaginary “princess friends” to whom she speaks with often.

By accident, Evan discovers that these imaginary friends can actually predict the stock market and the fate of financial companies. Evan then enlists his daughter in helping him land big clients because he knows what will happen in the financial markets. However, to enter into her world of imagination, he must become much like a child himself and pay attention to his daughter.

Together, they enter the world of her imagination – though they never leave their apartment. Evan must sing, dance and be silly in order to get an audience with the imaginary princesses. Neither Evan nor the viewers ever hear or see these imaginary people, but his daughter Olivia says what they are “saying.”

As they continue with the imagination play, Olivia opens up to her dad and they form a bond which they have not had since Evan and his wife divorced. The “magic play” works for Evan, who becomes one of two executives in line for a promotion. Meanwhile, Olivia practices for her school choir and turns to her dad to help her not be nervous.

At work, the financial “showdown” arrives as Evan is to present his plans in order to be considered for the promotion. However, through a set of circumstances, Evan does not have Olivia with him in order to hear from the imaginary princesses. More importantly, the big presentation conflicts with Olivia’s choir performance. Thus, Evan must decide between his promotion and his daughter.

IMAGINE THAT is a warm, family friendly movie that is big on heart and long on laughs. Eddie Murphy is terrific and Thomas Hayden Church is hysterical as Evan’s rival, a pseudo Native American who has dreams and spirits that talk to him about what the clients should do financially.

There is an unclear plot point as Evan desperately tries to get the blanket from his daughter, only to have his ex-wife become very angry with him. But overall, the movie flows well.

There is very little negative content to this family oriented movie.

There is a magical side to the story, however. No one, not even the viewer, enters into, sees or hears the imaginary world; only Olivia can. In the end, the imaginary princesses “leave,” now that Olivia is more secure in her relationship with her father. The movie hints that Olivia needed her blanket and imaginary friends because she was traumatized by her parents’ divorce. The movie leaves viewers wondering if it was just strange coincidences or if there really were princesses who gave financial advice.

Evan is a good father, though busy and distracted. He prays “to the Lord” for his rival to stop talking in one scene and then prays before dinner with his daughter when they make pancakes together for the first time.

IMAGINE THAT shows the love that can grow between a father and a daughter and is a heartwarming, funny movie.