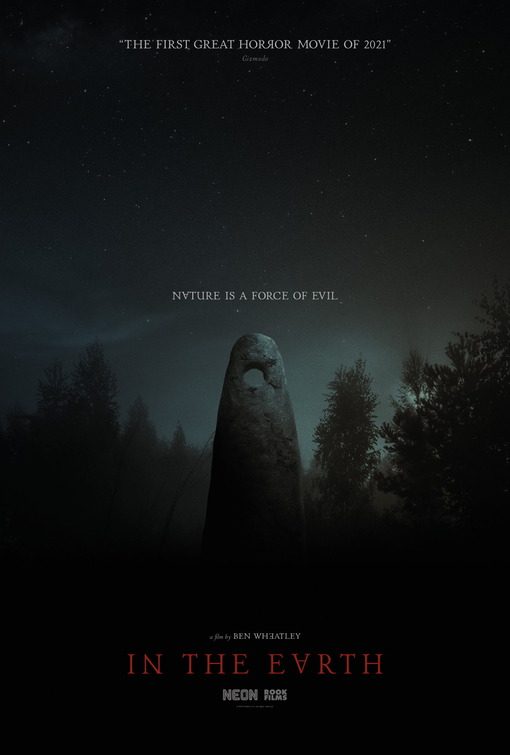 IN THE EARTH is a bizarre horror movie from a major independent studio in Hollywood. The story is about a young scientist, Martin, and his female guide, Alma, who venture into a forest to locate the man’s former colleague and ex-lover, Olivia. Olivia is working at an isolated outpost. Before they get there, they meet a strange, bearded man named Zach, who holds them captive. Zach thinks the forest is ruled by a sorcerer who placed his essence into a pagan standing stone next to Olivia’s outpost. Olivia’s story turns out to be almost as weird as Zach’s but imbued with pseudo-science. She’s trying to communicate with the plant-fungus system she thinks controls the forest.

Just when the story of IN THE EARTH gets interesting, the third act devolves into confusing, mystical visions fueled by mushrooms spewing clouds of hallucinogenic mist. Nothing is resolved, no communication takes place, and no answers are offered. IN THE EARTH contains many obscenities and profanities and some strong gruesome violence. However, it’s the movie’s false pagan worldview, philosophy and occult references that are abhorrent and unacceptable.

(PaPaPa, FRFR, OO, C, LLL, VVV, MM):
Dominant Worldview and Other Worldview Content/Elements:
Very strong, and confused and confusing, pagan worldview mixed with false religion where a woman scientist and her husband combine science with pagan beliefs about nature and spirits controlling the forest that humanize nature or Creation, apparent worship of nature when woman looks up and says thank you after mushroom mist gives her a hallucinogenic experience, woman talks about communicating with the system of plant-fungus by using light and sound, and a reference to a female woodland spirit with a strange name, plus woman mentions, reveals and uses an occult witchcraft book from 1640 titled THE HAMMER OF THE WITCHES (images from the book are shown) that also has Christian talk, specifically a reference to prayer and “God’s light,” in it (not much seems to be resolved or revealed at the end, so the story and its worldview are ultimately confusing, not just confused)
Foul Language:
14 obscenities, two strong Jesus profanities, and 18 light profanities
Violence:
Very strong violence when man injures bottom of his left foot, and another man stitches the large gash, when the other man chops off the man’s two smallest toes with an ax (allegedly to stop the infection, but the man with the ax seems a bit crazy and capable of lying), when a man discovers a dead body with its entrails hanging out, and when a character is stabbed in the eye and is shot dead after trying to pull out the thing in his eye, combined with other less gruesome and bloody violence includes a woman and a man sleeping in two small tents are beat up by two unseen people, man knocked unconscious, some struggling, people are tied up, man shoots arrows at woman he’s chasing but misses, and brief references to human sacrifice
Sex:
No sex
Nudity:
No nudity
Alcohol Use:
No alcohol use
Smoking and/or Drug Use and Abuse:
Smoking tobacco and people have hallucinogenic experiences in a forest when the mushrooms there release a cloudy mist, but the experiences don’t clear up the story in any way; and,
Miscellaneous Immorality:
People have their shoes stolen and equipment smashed, loud noises accompany bright lights in a couple scenes set in a forest, people are held captive and tied up, a woman and her husband are estranged and in conflict, but they also seem to be working together.

IN THE EARTH is a bizarre horror movie about a young scientist and his female guide who venture into a forest to locate the man’s scientist friend who’s working alone at an isolated outpost, only to encounter a strange, deranged man who holds them captive. Just when the story of IN THE EARTH, which has some gruesome violence and lots of foul language, starts to get interesting, the third act devolves into confusing, mystical visions fueled by mushrooms spewing clouds of hallucinogenic mist and doesn’t resolve anything.

IN THE EARTH opens in a forest outside Bristol, England, which has been hit with a COVID-like virus. The young scientist, Martin Lowery, walks to a large, isolated cabin. There, a scientific team is helping Martin’s former colleague and ex-lover, Dr. Olivia Wendle. Wendle is studying something called mycorrhiza in the forest, which may be able to increase crop efficiency. The movie never explains this to viewers, but mycorrhiza is the symbiotic relationship between fungi, large and small, with green plants. Plants can supply sugars to a fungus while a fungus supplies water and nutrients from the soil to plants.

Olivia has set up a camp two days’ walking distance from the cabin, but the scientific team at the cabin hasn’t heard from Olivia in several months. They provide Martin with a female guide named Alma to lead him to Olivia’s camp. Before they depart, Martin sees there’s a large lithograph on a wall depicting some kind of complicated pagan ritual. Alma explains to him that the lithograph refers to a local legend of a female woodland spirit called Parnag Fegg.

While walking to Olivia’s camp, Martin and Alma find an abandoned campsite. Then, that night, while sleeping in their small separate tents, they’re attack by two people and their shoes are stolen. They decide to continue making their way to the camp, but Martin badly cuts his left foot.

Martin and Alma think they are fortunate when a bearded man named Zach, who’s living in the forest, offers them shoes, food and drink, and cleans and stiches Martin’s foot. However, the “tea” he offers them contains a sedative. So, they fall asleep, and when they start to wake up, they find themselves tied to two chairs.

Zach keeps them sedated, however, and starts dragging their bodies outside his large tent to take ritualistic photos of them and himself in white paper costumes. Using animal guts, he also stitches a strange symbol into one of Martin’s arms.

When Zach finally lets them wake up, Zach tells Martin that the symbol on his arm is a sign to the powerful sorcerer who controls the forest and its plant-fungal system and who placed his essence into a pagan standing stone somewhere in the forest. He tells them Olivia doesn’t understand anything about this spirit and is trying to use science instead of art and religion to communicate with it.

Gruesomely, Zach decides that Martin’s foot is too infected, and he needs to cut off a couple of Martin’s toes. Of course, Martin demands to be taken to the hospital, but Zach claims Martin would die before they get there. So, in a comically gruesome scene, he takes two tries to chop off Martin’s two smallest toes and bandages up the bloody wound.

Zach starts to prepare another kind of pagan ritual for Martin to endure. While doing so, however, he accidentally drops a sharp instrument and doesn’t notice. As Zach drags Martin outside the tent to perform his new ritual, which may involve sacrificing Martin, Alma uses the sharp instrument to get loose and knock Zach unconscious.

Alma and Martin decide to make their way separately to Olivia’s camp. Zach, however, is soon hot on their trail. Alma is able to draw Zach away from Martin, and she eventually eludes Zach, who’s carrying his ax and a bow and arrow.

Martin and Alma finally make it to Olivia’s camp separately. They find that Olivia uses an electronic board at the camp to control large lights and speakers in the woods to try to communicate with whatever is controlling the forest. She thinks the whole forest is connected by the symbiotic plant-fungus system, or mycorrhiza. She also tells them that the words Parnag Fegg originally just meant light and sound, so that’s why she’s using the lights and speaker system. Martin and Alma also find, however, that Olivia has set up her camp next to the pagan standing stone that Zach said the sorcerer used.

Martin and Alma are afraid that Zach will eventually make his way to Olivia’s camp and attack them. So, naturally, they want to leave as soon as possible. However, just as they start thinking this, all the mushrooms in the forest start releasing a mist that surrounds the camp and prevents them from leaving.

The story in IN THE EARTH starts to get interesting when Zach tells Martin and Alma about his philosophical differences with Martin’s former colleague, Dr. Olivia Wendle. However, nothing is resolved in the end. For example, Olivia talks about trying to communicate with the system or force that’s controlling the forest, but no real communication occurs at the end. In fact, the story just devolves into confusing, mystical, nonsensical visions fueled by mushrooms spewing clouds of hallucinogenic mist. The visions are indecipherable. No spirit reveals itself, no answers are revealed, and the forest and its strange machinations remain hazy.

Not only does IN THE EARTH seem like a waste of time; it also contains some very strong gruesome violence. It’s not the most gruesome violence you’ll ever see these days in movies, but it’s excessive enough. The movie also has some “f” words, two strong Jesus profanities and many light profanities. However, ultimately, it’s the false pagan worldview, mystical religion and occult references that make IN THE EARTH abhorrent and unacceptable.