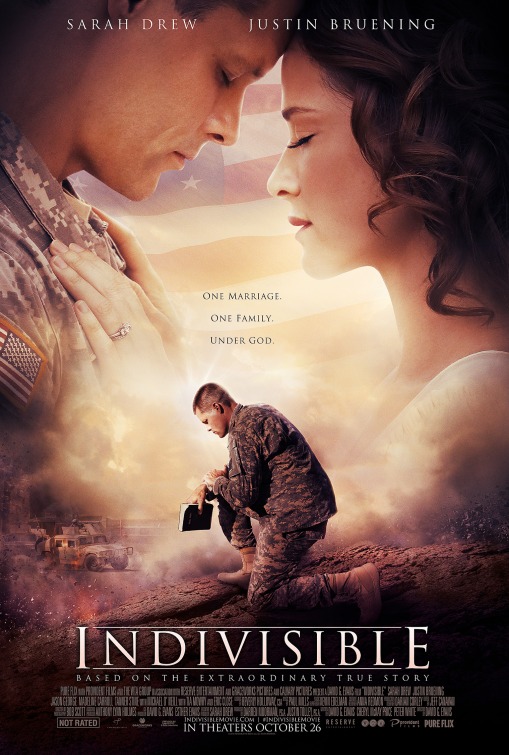 When an Army chaplain is confronted with the horrors of war and difficulties back home, who will he turn to for help?

Posted by Movieguide on Thursday, October 25, 2018

In INDIVISIBLE, Army Chaplain Darren Turner leaves his family for his first tour of duty in Iraq in 2007. Two other soldiers from his base are deployed to the same platoon. As he ministers to the soldiers in the desert, Darren faces the harsh realities of war, including an intense personal battle no one sees coming. While Darren’s in Iraq, his wife and children struggle for hope and strength. Darren’s wife ministers to the other military families on the base. Her calling is just as strong as her husband’s.

INDIVISIBLE gives viewers a believable, intense, inspiring glimpse into modern military life. The story takes unconventional risks, depicting a nuanced Christian character who’s almost overcome by enormous pressures. Chaplain Turner is also confronted by nearly-impossible spiritual questions. The movie doesn’t back down, but provides honest, biblical answers while showing how God guides Darren and others to higher ground. INDIVISIBLE raises the bar for faith-based Christian movies. It feels anything but forced. Because of some violence and mature themes, INDIVISIBLE warrants caution for children. INDIVISIBLE isn’t a perfect movie, but it’s a really good one.

(CCC, BBB, PPP, L, VV, M):
Dominant Worldview and Other Worldview Content/Elements:
Strong Christian, biblical, evangelical worldview with dedicated Christians as the main characters, an army chaplain is the main male character and he has a crisis of faith, characters face tough spiritual questions about their own and others’ circumstances, brief conversations and a few characters’ distresses pose tough philosophical/spiritual questions, but answers leave viewers feeling pro-Christian, the statement is made that faith will probably include some doubt, questions arise over the meaning of life for a minor character who dies, young children could possibly confuse an object that conveys sincere Christian meaning as a sort of talisman, the name of Jesus is preached in a realistic setting and in a very positive manner that fits the storyline in a natural way, and Christians and Americans are generous to Middle Easterners who probably are Muslim, plus very strong Pro-American, patriotic elements provide a positive view of American military forces overseas.
Foul Language:
A possible “d” word and a couple light exclamatory profanities;
Violence:
Some brief and intense action violence with soldiers shooting terrorists and terrorists shooting back, explosions, and a slightly bloodied and dead body of a child is shown as soldiers carry body into hospital and try to comfort child’s father (one soldier is very traumatized by this event), and other, lighter action violence such as a man seemingly threatens another man for a second with a knife, two men momentarily argue and one quickly charges at the other, couples argue sharply and a man yells at young children for an instant, man breaks glass and cuts himself, blood on a soldier’s hand is seen, at least two soldiers are implied as having died in battle, and it’s implied that one soldier loses part of a leg and is seen in a wheelchair later;
Sex:
No sexual content, people kiss, and tender affection is shown between married couples;
Nudity:
No nudity;
Alcohol Use:
No alcohol use but a man shows up at home, and he’s drunk;
Smoking and/or Drug Use and Abuse:
No smoking or drugs; and,
Miscellaneous Immorality:
People question faith in God and a man feels abandoned by God, but these issues are resolved in a very positive, uplifting manner.

Members of three military families battle physical, emotional and spiritual forces while striving hard to grow in grace, truth, love, and greater understanding in the Christian movie, INDIVISIBLE. Directed and co-written by David G. Evans, INDIVISIBLE depicts the true story of Darren Turner and his family when he was first deployed to Iraq in 2007.

Darren Turner is an Army chaplain deployed on his first tour of duty right after he and his family move to a new home in Atlanta. Darren and his wife, Heather, see Darren’s job as a calling from God for both of them. Their hot-tempered next-door neighbor, Michael Lewis, serves with Darren as a major in the same platoon. Another soldier from Atlanta soon becomes an important fixture in Darren’s life as well.

Darren serves as pastor and friend in Iraq, making headway into the spiritual lives of those around him. Though he does a great job serving those around him, Darren’s own inexperience with war quickly catches up with him. Eventually, the one who feels like he should have all the answers sinks into an oblivion of mental, emotional and spiritual quicksand. For help, Darren will have to trust the patience and tough love of fellow Christians who fought, and now fight, beside him. Along the way, Darren faces deep psychological trauma, and a serious challenge to his own Christian faith, leading him to seek counseling from a spiritual elder. As Darren experiences devastating shell-shock, the movie briefly feels dark and mysterious, mirroring Darren’s experience of half-losing his mind. Darren’s personality shape-shifts into someone almost unrecognizable, an angry and violent man who becomes too much for his sweet, Christian family to bear.

While Darren’s at war, his wife, Heather, serves on a military support team. She often prays with fellow military wives in the thick of their most painful moments. It becomes almost a separate battlefront, spiritually comparable to Darren’s. While the world goes on for others, Darren and Heather, who stay in touch for 15 months by brief phone calls, must surmount the temptation to give up under the pressures of Darren’s wartime deployment.

A recurrent theme in the movie includes wearing the Armor of God to protect oneself spiritually. Likewise, the story promotes the idea that married couples need spiritual protection and shepherding to keep their relationships from being divided (so they can stay “indivisible”).

The sanctity and strength of marriage is one of Director Evans’ most important themes. Even the movie’s tagline reads, “One marriage. One family. Under God.”

As a Christian faith-based movie, INDIVISIBLE takes unconventional risks, depicting a nuanced main character who buckles under the enormous pressures of war and a changed reality when he arrives back home. Along the way, unbelievers and critical circumstances pellet Darren with gritty spiritual questions. The movie doesn’t back down, however. Instead, it answers questions honestly and shows how God faithfully guides Darren and others to higher ground.

INDIVISIBLE is packed with everything from TV starlet Sarah Drew to Hollywood war landscapes to several poignant scenes. This high-quality production raises the aesthetic bar for Christian movies and delivers an authentic emotional roller-coaster. During the credits, the audience is treated to a photo of the real-life Turner family. The movie states that Darren is now a battalion chaplain at Fort Bragg, North Carolina. He and Heather use their experiences to assist other military families.

INDIVISIBLE is “dedicated to the chaplains of the United States Armed Forces and to the soldiers that valiantly serve to protect our freedom.” Viewers are also invited to check out thewarriorsjourney.org, a Christian devotional resource for military families. On October 23, 2018, book publisher Thomas Nelson will release a novel of the same name, as well as a devotional, “Indivisible: One Marriage Under God.” Also, a marriage-themed Bible study is available at smallgroup.com.

INDIVISIBLE warrants caution for children due to some intense war scenes and other dramatic content. The movie is emotional, exciting and ultimately incredibly inspiring. Despite tragedy, faith endures and gives comfort and joy. INDIVISIBLE isn’t a perfect movie, but it’s a really good one.