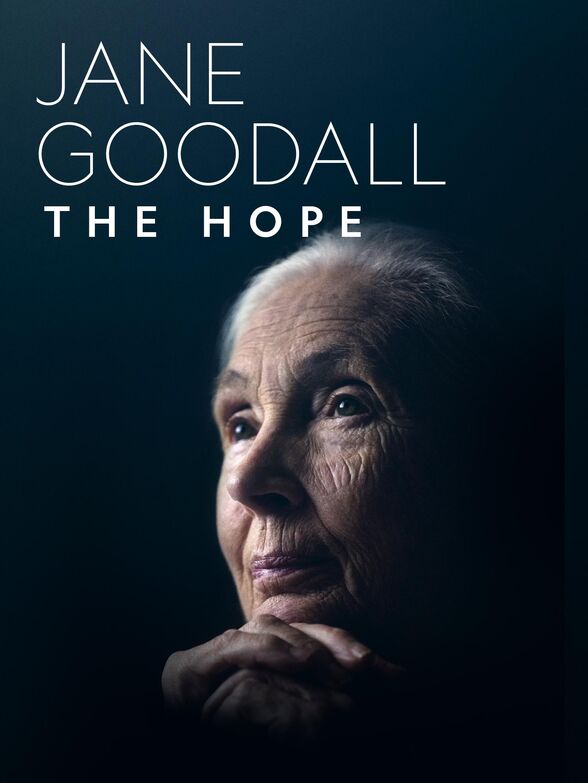 JANE GOODALL: THE HOPE is a documentary about the primatologist and activist Jane Goodall. It recounts her impact on the world in the last 50 years. It also details her current efforts to reach millions of children with her message of protecting the environment, protecting wildlife and fighting “climate change.”

JANE GOODALL: THE HOPE is most inspiring when it shows how Jane Goodall has made huge improvements in the protection of her beloved chimpanzees. However, the documentary isn’t structured to be a dramatic narrative, so it doesn’t have a riveting story to put viewers on the edge of their seats. Goodall’s efforts to protect wildlife and support reforestation are certainly admirable. She has a genial and welcoming, but strong, personality that drives her to work with many different kinds of people and groups. However, the documentary has a mixed worldview that’s confusing. There are some light Christian and even a few biblical references, but there are no references to God or Jesus. Jane Goodall also seems to have a pagan, environmentalist view of human and animal life in JANE GOODALL: THE HOPE.

(PaPa, EE, PC, BB, C, FRFR, Acap, Fe, L, V, A, M):
Dominant Worldview and Other Worldview Content/Elements:
Mixed, sometimes confusing, pagan worldview with some strong environmentalist elements and sometimes moral content about protecting Africa’s chimpanzee population and rescuing orphaned chimps, reforestation, helping people in Africa manage the land around them better for both their future and the future of wildlife, and some politically correct talk about apocalyptic climate change (including brainwashing millions of children into believing this nonsense), with talk comparing the “spiritual power” or energy in old cathedrals where generations of people have worshipped with the spiritual power felt when the title character is visiting the forest and visiting chimpanzees in the wild but there is no overt reference to God or Jesus, title character is called the “Mother Theresa to the environment,” title character says she feels chosen as a “messenger” and called to do what she does and says she’s concluded that things happen for a reason but doesn’t refer to God or Jesus and says she doesn’t know if there’s an afterlife though she appears to lean that way, title character quotes a biblical aphorism from Luke 9:62 but only indicates it’s from the Bible somewhere, title character says, “If humans have a soul, then chimpanzees have a soul,” some talk about Mother Nature indicating a worship of the Creation rather than the Creator, man mentions some anti-capitalist attitudes of some environmentalists against oil companies but praises Jane Goodall for working with oil companies to protect chimpanzees in Africa, and title character makes some light feminist comments
Foul Language:
No obscenities but one OMG exclamatory profanity
Violence:
A suffering elderly chimpanzee is shown
Sex:
No sex
Nudity:
Natural chimpanzee nudity but not graphic
Alcohol Use:
Adults drink whiskey and wine
Smoking and/or Drug Use and Abuse:
No smoking or drugs; and,
Miscellaneous Immorality:
Title character mentions moving from oil and gas to “clean green energy,” but green energy like solar and wind power has been exposed as not very green, and title character says people should use their mind and their heart but focuses on reaching people emotionally rather than intellectually with her message.

JANE GOODALL: THE HOPE is a documentary about the influential primatologist and environmentalist activist Jane Goodall that recounts stories about her impact on the world in the last 50 years, and her current efforts to reach millions of children with her message of protecting the environment, protecting wildlife and fighting apocalyptic “climate change.” JANE GOODALL: THE HOPE is divided into sections, so it’s not structured to be a dramatic narrative like MARCH OF THE PENGUINS, and it has a mixed worldview that makes some good points and some bad points.

Divided into several sections, JANE GOODALL: THE HOPE first recounts all the projects that Jane has worked on in the past. It also gives background to her most notable studies in the 1960s about how chimpanzees interact in the wild and, if they could, interact with humans. Jane changed the way many scientists view chimpanzees because they also use tools like humans and have personalities and emotions.

Throughout the years, Jane’s role has shifted from scientist to environmental activist. For example, since the 1980s, she’s worked with an oil company to rescue orphaned and wounded chimpanzees to place them in a wildlife sanctuary in the Congo. Also, since 1991, Jane has worked against deforestation and works with African communities to help them better manage their forests and agriculture areas.

The documentary also shows how Jane has changed how lab companies view testing on chimpanzees. Instead of being argumentative or aggressive, Jane uses her emotion and “heart” to promote such changes. Many scientists never realized how testing on chimps was having an impact on their wellbeing and mental state since these animals are supposed to be in the wild. According to the documentary, chimpanzees have different immune systems from humans, so they don’t make as good a test subject as people once thought. As a result of these efforts, the National Institute of Health has established a Chimp Haven for former test chimps.

Lastly, the documentary discusses Jane’s establishment of 150,000 Roots & Shoots Clubs for about 150,000 schoolchildren in more than 140 countries. In recent years, Jane has not only been teaching these schoolchildren about protecting wildlife and stopping deforestation, she has also been teaching children the theory of apocalyptic climate change. The documentary shows Jane Goodall interacting with some of these children in Tanzania and in London at a Roots & Shoots world conference, which gets a visit from Prince Harry.

JANE GOODALL: THE HOPE is most inspiring when it shows how Jane Goodall has made huge improvements in the protection of her beloved chimpanzees over the years. However, the documentary isn’t structured to be a dramatic narrative like MARCH OF THE PENGUINS, so it doesn’t have a riveting story that puts viewers on the edge of their seats. That said, Jane Goodall’s personal magnetism with other people, especially younger people, is a wonder to behold.

Here it’s interesting to note that Jane’s journey into wildlife preservation and protecting the environment began with her childhood fascination with the children’s book, THE STORY OF DR. DOLITTLE, about the fictional doctor who can talk to the animals. Jane lovingly opens the book in her childhood home for the cameras and says it was the first book she ever bought. Jane’s childhood story shows how much the mass media of entertainment can shape the hearts and minds of children for their whole lives!

Jane Goodall’s efforts to protect wildlife and support reforestation are certainly admirable. “If we don’t help people find ways of living that don’t destroy the environment,” she says, “we can’t help the chimpanzees.” She has a genial and welcoming, but strong, personality that drives her to travel around the world more than 300 days during the year. “If you don’t talk to people, how can you ever expect them to change?” she asks. This attitude is why she’s not opposed to working with oil companies and other corporations to protect wildlife.

However, JANE GOODALL: THE HELP has a mixed worldview that’s a little confusing. She cites a biblical passage in one scene. She also talks about the “spiritual power” she experiences whenever she’s working with chimpanzees in the wild or simply walking through a forest. In fact, she compares that spiritual experience with the spiritual experience she feels whenever she’s inside an old cathedral where people have been worshipping for centuries. Despite this, she never mentions God or Jesus and says she doesn’t know if there’s an afterlife, even though she appears to lean toward the view that there is an afterlife. Also, in another scene, she agrees with a letter she receives from one child that thanks “Mother Nature” for providing water and food. In still another scene, she says, “If humans have a soul, then chimpanzees have a soul.” Finally, the documentary shows Jane Goodall promoting the theory of apocalyptic climate change several times, including during the ending. Goodall clearly thinks that “alternative” energy sources like solar and wind are more green than oil and gas, but the scientific evidence actually shows that oil and gas are just as green as solar and wind and far more effective.