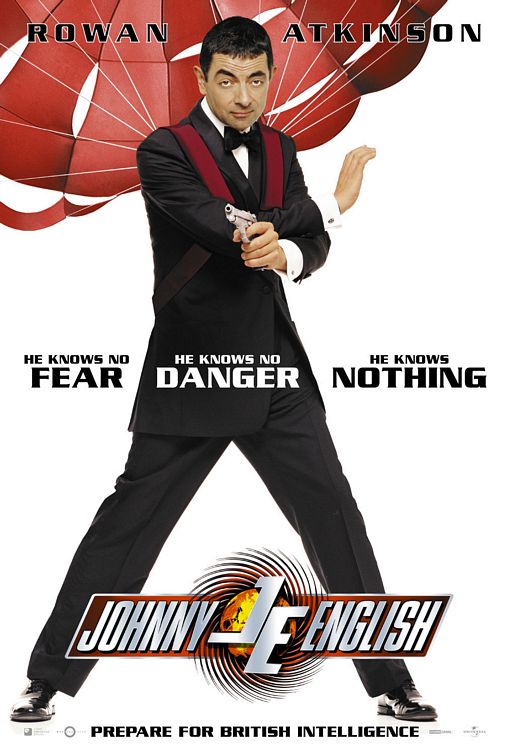 JOHNNY ENGLISH is a delightfully silly summer comedy starring Rowan Atkinson, Mr. Bean, in the title role, as a bumbling spy clerk who gets the chance to be England’s number one secret agent when the Crown Jewels are stolen. Fans of James Bond, Inspector Clouseau, and Maxwell Smart, and those who would like a cleaner AUSTIN POWERS movie, may love this genial spoof, which, however, contains a few obscenities, brief toilet humor, and other light objectionable content.

(BB, PP, Acap, Ab, C, L, V, S, N, A, D, M) Moral worldview with highly patriotic protagonist as well as anti-capitalist element where villain is a greedy, wealthy businessman, and a few anti-Christian jokes where criminal has “Jesus is coming; look busy” tattooed on his lower back and where hero mistakes Anglican archbishop for someone else, mixed with serious, positive Christian elements at a funeral and in a coronation ceremony; five obscenities, two light profanities, and bathroom humor about feces where man climbs pipe tunnel that leads to toilets; light action violence and comic violence none bloody, such as car chase, gunfire, pratfalls, fighting, and man threatens pet dog with gun; very light suggestive banter between hero and his love interest; rear male nudity used for comic effect and brief female cleavage, including one scene where man accidentally falls on heavy woman’s bosom; a few scenes of social drinking at parties; comic scenes of characters being drugged with muscle relaxant and truth serum; and, main character lies a lot to get out of trouble.

“The word mistake, sir, is not one that appears in my dictionary.” When you hear that from Rowan Atkinson, TV’s MR. BEAN, you just know you’re in for a fun, summer ride. Atkinson plays Johnny English, a third rate British spy, in this silly, and genuinely funny, movie, JOHNNY ENGLISH. The story is largely predictable: bad guy Pascal Sauvage (John Malchovich) has a diabolical (and far-fetched) plot to doom England. All of England’s top spies are wiped out, so our man English must rise to the occasion and save crown and country. Of course, English, who is a marvelous mix of Inspector Clouseau, Agent James Bond, and Maxwell Smart, sees the danger no one else sees and must get his man and convince his boss that he’s on the right track.

JOHNNY ENGLISH spoofs all the classic spy movie elements: the car chase, the beautiful and mysterious counter-spy, the faithful and capable assistant, the gadgets, and, of course, the Aston Martin supercar. Even though the viewer can see many of the gags coming a mile away, they are pulled off with great skill. Atkinson’s expressive face and physical humor deliver them perfectly. Some of Atkinson’s antics elicit mild giggles, others are truly hilarious, including a rather unforgettable car chase and a case of mistaken serums. His Bond-esque raised eyebrow is priceless.

JOHNNY ENGLISH contains elements of deception and defying authority. English often lies to get out of trouble and defies orders to get his man, but he’s also very patriotic, persistent, and loves to make jokes about the French. There are also some scenes of brief action violence in JOHNNY ENGLISH as spies meet spies, but none of these scenes is particularly brutal or bloody, and many are comic. English’s love interest, Lorna Campbell (Natalie Imbruglia), adds a little sizzle and innuendo to the plot. “Have you made love to many women?” she asks English. “One does one’s best,” English brags, but his startled expression and, at first, baffled reaction to her question couches the innuendo in comedy. Nevertheless, the sexual content will be clear to older children. There is also some crude bathroom humor as English decides to enter a building via a pipe that turns out to lead to some toilets in the men’s room. You can imagine the result. Finally, one of the villain’s henchman has the words, “Jesus is coming; look busy” tattooed on his lower back, which leads to a major joke later on in the movie. Also, English mistakes the Archbishop of Canterbury for someone else. These elements seem to be anti-Christian and offensive in a mocking sort of way, but two scenes in the movie, one set at a funeral and one set at a coronation ceremony, contain positive Christian references.

English slides in and out of being smooth and then abruptly bumbling in a way that makes him quite charming. John Malkovich is funny as the evil, smirking French villain, but could have taken that villainy a bit further for more comic effect. Also, his character is another greedy, maniacal businessman, an anti-capitalist cliché.

All in all, however, JOHNNY ENGLISH is a nice oasis of silliness and fairly clean summer fun, especially for those who avoid AUSTIN POWERS for its crassness and vulgarity.