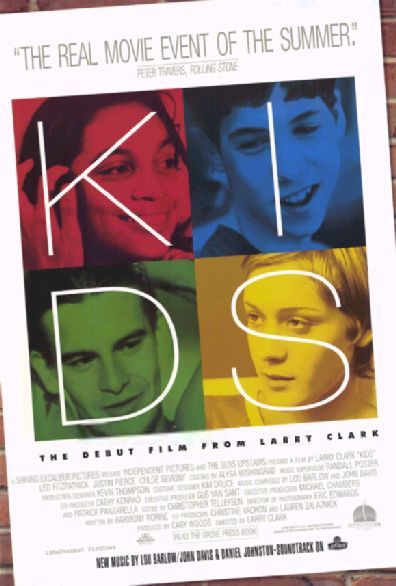 KIDS is a damaging film about damaged lives. Telly, the storys’ protagonist, leads a group of kids, doing their thing, one hot summer day in Manhattan. These are more than your usual troubled teens – they drink to drunkenness, do drugs to oblivion, beat up a man with skateboards for recreation, break into a public pool at night for some sexual romps, steal, lie, indulge in orgies, rape and even include some cherubic minors in their terrifying play – all in one day and without a trace of conscience or morality. The film follows Telly as he pursues his life’s goal, the hunt for his latest virgin conquest. We also see Jennie, one of Telly’s-exgirlfriends, who is on the hunt for Telly to tell him he has made her HIV positive. Their meeting at a ghastly party and the final break-down of Telly’s friend Casper makes KIDS a nightmarish journey that hints uncomfortably at undercurrents of truths.

Director Larry Clark and first-time writer Harmony Korine (not much older than a kid himself) combine their talents to give a cinema verite style film that is raw, blunt and gruelingly shocking. Graphic sexual situations, non-stop obscenities, vulgarities and profanities, nudity and rampant alcohol and substance abuse make it a long and tortured day to endure in KIDS.