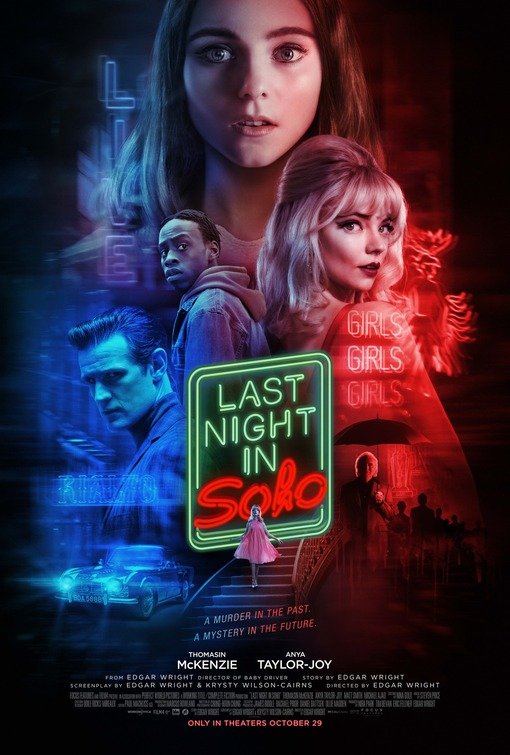 LAST NIGHT IN SOHO is an atmospheric supernatural horror mystery. Eloise is a naïve aspiring fashion designer in London, in the Soho district. Her snooty dorm roommate convinces Eloise to rent an upstairs room from a no-nonsense elderly woman. Eloise starts having evocative dreams about Sandie, a beautiful aspiring singer with blonde hair and wearing a frilly red dress in 1960s London. Sandie gets involved with a charming young sharpie named Jack who promises to help her career. Eloise’s dreams turn dark when Jack gets Sandie a job singing at a burlesque house and forces her into prostitution. As Eloise’s dreams about Sandie turn darker, the darkness starts to spill over into Eloise’s life.

Director Edgar Wright, who co-wrote the script in LAST NIGHT IN SOHO, uses a great 1960s soundtrack and striking visuals to create an atmospheric thriller. The story itself is captivating and is filled with vibrant, well-acted characters. However, the story involves prostitution, murder, ghosts, strong foul language, and some bloody violence. So, despite some positive moral content, the occult, dark themes in LAST NIGHT IN SOHO are unacceptable.

(OO, B, FeFe, Ab, Cap, LLL, VVV, SS, NN, AA, DD, M):
Dominant Worldview and Other Worldview Content/Elements:
Strong occult worldview where the main female character is haunted by the past in the form of ghosts and dark visions that take over her life in the present, with some positive moral elements about solving some murders and saving the life of a friend and main character has a positive relationship with her grandmother, plus a strong feminist tone about how badly society treats women, a rude character makes an Anti-Christian joke about the main female character acting like a Born Again Christian, and some pro-capitalist elements at the end
Foul Language:
About 28 obscenities (with nearly 20 “f” words), two Jesus profanities and three light exclamatory profanities
Violence:
Bloody, partially depicted stabbings and slicings, man slaps young woman, and it’s implied he beats her, vehicle hits man, and there’s blood around his corpse, scary ghosts of dead men haunt female character in several scenes, some struggling occurs, character poisoned, and two people have to escape a raging fire with one having been knocked unconscious
Sex:
Strong sexual content includes lead female character’s alter ego is forced into prostitution, and this becomes a main plot in the story, some scenes of implied prostitution and implied fornication on a female character’s bed, female student leaves dorm room when roommate enters room passionately kissing a boy, implied oral sex, and a revelation of rape
Nudity:
Rear female nudity in one scene, and women in skimpy outfits in burlesque club with men crudely cheering
Alcohol Use:
Alcohol use and drunkenness
Smoking and/or Drug Use and Abuse:
Tobacco smoking, brief marijuana smoking, young females snort cocaine in a public bathroom, young woman passes a room where someone is injecting heroin; and,
Miscellaneous Immorality:
Stalking, lying, and the crimes of one character are partially excused.

LAST NIGHT IN SOHO is an atmospheric, supernatural horror mystery about an aspiring young fashion designer in London who’s mysteriously drawn into the dangerous, violent world of a glamorous young singer living in the red-light district in 1960s London. Using a great 1960s soundtrack and striking visuals, LAST NIGHT IN SOHO tells a captivating story, but the story involves prostitution, murder, ghosts, strong foul language, and some bloody violence.

The movie opens with a demure young woman named Eloise leaving her grandmother to attend a fashion design school in Soho in London. Eloise seems to have suffered some mental issues earlier because she doesn’t tell her grandmother that she’s still seeing images of her dead mother, who committed suicide years ago. The grandmother is worried that London will have the same negative effect on Eloise as it did her mother when she was young.

Arriving at the school, Eloise is placed in a dorm room with an outgoing young woman who drags her to a bar with some friends. However, the other students make fun of Eloise’s backwardness and fascination with 1960s music and style. So, Eloise leaves the dorm and rents an upstairs room from an elderly lady named Miss Collins.

Eloise starts having dreams about Sandie, a beautiful aspiring singer with blonde hair in a frilly red dress. Sandie gets involved with a charming young sharpie named Jack who promises to introduce her to all the right people who can further her singing career. At first, Eloise is captivated by the dreams of swinging London. She impresses her teacher by crafting a red dress patterned after the one Sandie wore in the first dream. Eloise even decides to dye her hair blonde, just like Sandie’s.

However, the dreams turn into disturbing nightmares when Jack gets Sandie a singing job at a burlesque club in the red-light district. He forces Sandie to become a bargirl, not only shilling for drinks with male customers but also taking them home for paid sex. Sandie’s bedroom turns out to be the same room where Eloise is now staying.

As Eloise’s dreams of Sandie turn darker, the darkness starts to spill over into Eloise’s own life. Could the elderly gentleman who seems to be stalking Eloise be Jack?

Director Edgar Wright, who co-wrote the script with Krysty Wilson-Cairns, uses a great 1960s soundtrack and striking visuals in LAST NIGHT IN SOHO to create an atmospheric thriller. The story itself is captivating and is filled with vibrant, well-acted characters. Thomasin McKenzie as Eloise and Anya Taylor-Joy as Sandie deliver sympathetic performances. Matt Smith and Terence Stamp are creepy as Jack and as a mysterious grey-haired gentleman who seems to be stalking Eloise. The late Diana Rigg plays Eloise’s elderly no-nonsense landlady, Miss Collins.

All that said, LAST NIGHT IN SOHO has an occult worldview. For example, the movie turns out to be a ghost story. Thus, Eloise is haunted by the past in the form of ghosts and dark visions. The story also involves prostitution and murder and contains lots of strong foul language and some bloody violence as well. There are some positive moral elements, however. Eventually, for example, Eloise has to solve some murders and save the life of a friend. Despite that, the movie excuses the crimes of one character, and promotes some feminist ideology about how badly society treats women. Also, the story leaves some plot questions about how the murders were accomplished.

The occult, dark themes in LAST NIGHT IN SOHO are ultimately unacceptable.

Director: Director Edgar Wright, who co-wrote the script in LAST NIGHT IN SOHO, uses a great 1960s soundtrack, striking visuals to create an atmospheric thriller. The story itself is captivating, is filled with vibrant, well-acted characters. However, the story involves prostitution, murder, ghosts, strong foul language, some bloody violence. So, despite some positive moral content, the occult, dark themes in LAST NIGHT IN SOHO are unacceptable.