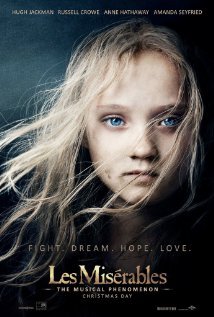 LES MISÉRABLES is back on the big screen in a fabulous new way, with heart rendering moments of redemption. Jean Valjean is a prisoner who stole a loaf of bread. Jean spends years in prison supervised by Javert, a hard-hearted official. Eventually, Jean is paroled. Jean breaks his parole when he steals from a bishop, but the bishop shows mercy to Jean. This leads Jean to repent and give his life to God. Even so, the legalistic Javert is always on Jean’s trail.

LES MISÉRABLES is an incredible tale of transformation. Jean Valjean is a thief and a sinner. However, when the Bishop shows him mercy, Jean cries out to God and asks for forgiveness. After repenting, Jean clearly transforms and clearly sacrifices himself multiple times. Time and time again, crosses are shown, the love of God is stated, and a clear depiction is sacrifice is portrayed. The movie does show the harsh realities of a sinful world, with depictions of prostitution, suicide, greed, and cruelty. However, the ending of LES MISÉRABLES is a marvelous achievement that will truly inspire many.

(CCC, BBB, L, VV, S, AA, D, MM) Very strong Christian, moral worldview with crosses in many of the scenes, church, paintings of Jesus, rosary, praying, and several highly redemptive statements including “God has raised you out of darkness,” “I have saved your soul for God,” and “To love another person is to see the face of God”; five obscenities, four strong profanities, spitting on someone, urinating into a cup and then giving it to someone to drink; strong violence includes children throwing rocks at man, men beating main character, war violence, suicide, women pushed around, woman slaps man’s face; a prostitute sells herself to have sexual relations for money but you see the distress of the women as she sells herself, kissing of a married women to someone other then her husband, and other kissing; no nudity, but women wear low cut dresses; alcohol use and drunkenness; smoking; and, greed, lying, cheating, and stealing, but mostly rebuked.

LES MISÉRABLES is back on the big screen in a fabulous new way, with heart rendering moments of redemption. The movie’s strong Christian worldview showing God’s transformational powers is brilliantly done in a brilliant way, with some harsh scenes showing the brokenness of humanity without God.

Jean Valjean is in prison for stealing a loaf of bread. A hard-hearted jailer named Javert monitors Jean. After getting out of prison, Jean is beaten and looked down upon by others. The only one who will shelter him is the Bishop. Housing him, feeding him, and blessing him, the Bishop shows God’s love, but Jean is a thief and steals the Church’s candles and ornaments. When the police catch Jean, they bring him back to the Bishop. They show the Bishop what he had done, but the Bishop gives Jean the ornaments and later tells Jean that he bought his soul for God. This leads Jean to cry out to God, pray for redemption and lay his life down to serve God.

Years pass and Jean has become an honest man of God. He has built a company and become the Mayor of a town. One of his workers, Fantine, isn’t liked by the others. They tell one of the supervisors she has a child out of wedlock. Fantine is dismissed from the company. This completely leads to her self-destruction.

Distressed and needing money for her sick daughter, Fantine becomes a prostitute. The level of self-destruction is completely saddening. This eventually kills Fantine, leaving her daughter an orphan.

When Jean hears of how Fantine was thrown out of his company, he comes to her side at the brink of her death. He assures her he will take her daughter, Cosette, as his own.

Even though God has completely transformed Jean, his old nemesis Javert (now a policeman) is on the search for him because he broke his parole. To avoid being found, Jean is constantly on the run. After finding Cosette in the hands of her despicable, lying, cheating aunt and uncle, Jean buys her from them. Together, they move to a new city. As more years pass by, Cosette has blossomed into a beautiful young lady. She has also won the heart of a young revolutionary.

LES MISÉRABLES is an incredible tale of transformation. Jean is a thief and a sinner. However, when he is shown mercy by the Bishop, Jean cries out to God, asking Him for forgiveness. After repenting, Jean clearly transforms and clearly sacrifices himself multiple times. Time and time again, crosses are shown, the love of God is stated, and a clear depiction of sacrifice is shown.

Media-wise caution is required, however, because the movie does show the harsh realities of a sinful world, showing Fantine’s self-destruction. Also, Cosette’s aunt and uncle are completely greedy liars who run a saloon and constantly act selfishly. These evils are clearly rebuked, however.

The production quality of LES MISÉRABLES is incredible, with moving scenes filled with depth and emotion. Wonderful voices reinvent the beloved songs from the original musical. The filmmakers stay true to the redemption so prominent to the story, showing crosses and sacrifice. With incredible sets and costumes, sometimes the scenes look like they’ve been taken from a painting from that time. LES MISÉRABLES is a marvelous achievement in every way.

See Movieguide® TV interviews with the stars of Les Miserables: