"The Profits of Pain" 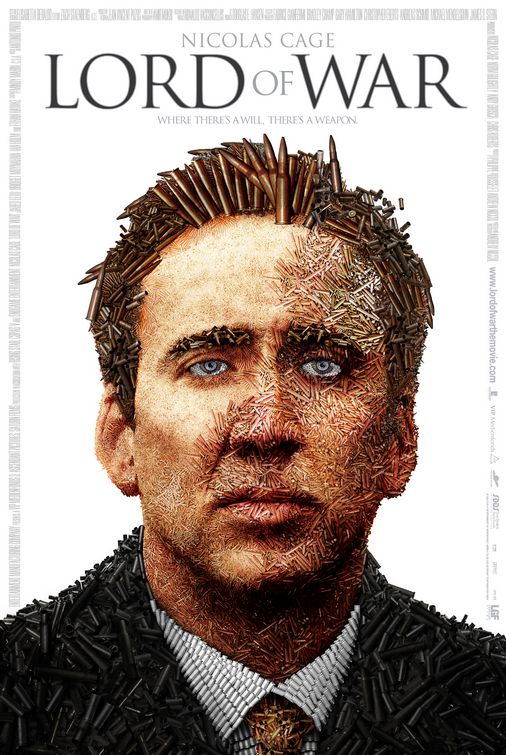 LORD OF WAR stars Nicolas Cage as immigrant Yuri Orlov, who, starting humbly in the Bronx, becomes a wildly successful international arms dealer who earns the title LORD OF WAR. Yuri is soon selling AK-47s by the kilo, offering tanks and military aircraft to third world countries, and finding buyers for his weapons of mass destruction. A squeaky-clean Interpol agent, Jack Valentine (played by Ethan Hawke), relentlessly pursues Yuri. Valentine is an honorable, just man intent on stopping Yuri. Yuri sees his role as a “necessary evil,” choosing not to take sides or get emotionally involved.

LORD OF WAR contains valuable moral lessons, but it is drenched in violent content, strong offensive language, drug use, sexual situations, some nudity, and strong elements of political correctness. For example, it asks viewers to unquestioningly believe purported and suspicious “facts” (such as “there are more gun shops in the U.S. than there are McDonald’s” restaurants). The United States and the other major super-powers are painted as the real thugs responsible for arming the world and its psychotic dictators. Though cleverly executed, LORD OF WAR is a little too preachy and self-righteous.

(HH, B, PCPC, ACap, AP, Ev, LLL, VV, SS, NN, AA, DDD, MM) Strong humanist worldview rebuked for its amorality about an international arms dealer who profits from war, with strong themes of political correctness, with the subtle implication that guns are evil, and a few anti-U.S. messages, notion of “freedom fighters” slammed, as well as a couple of minor evolutionary references and light anti-capitalist content; 75 strong obscenities, four profanities and two blasphemies; strong violence includes shootings, execution, genocide, bombings, and much blood; children and families shot for amusement, body burning after explosion, children lined against wall and shot, teenager shot in head, and man struck in face with crowbar; sexual content includes kissing, fornication, adultery, and suggestive dancing; brief upper female nudity, rear male and female nudity, and several scantily-clad women; much drinking; much smoking, drug sales and drug abuse; and, miscellaneous immorality includes the notion of starting a marriage with lies and deceit “since that’s where marriages end up anyway,” resisting an adulterous affair strictly out of fear of sexually-transmitted diseases, deception, denial, exploiting third world countries, profiting on wars and pain, using children as soldiers, a belief is expressed that evil will inevitably prevail, several characters confront the amoral protagonist and reflect a moral or ethical worldview, and final comments rebuke the hypocrisy of the protagonist.

LORD OF WAR opens brilliantly and enthusiastically with a first-hand perspective in the life of a bullet. As expected, it is eventually fired from a weapon and follows its final course through the head of a young man. Whether he was an opposing soldier or an innocent bystander, it is not clear, but he is just as surely dead.

This short experience insinuates that guns and bullets are the real culprits responsible for the death of the young man. But, is this a simplistic approach to a controversial subject or merely misdirection by the morally conflicted? LORD OF WAR tackles these issues and later weakly points out that these same tools can be used by some to keep peace instead of kill.

Immigrant Yuri Orlov, starting humbly in the Bronx, becomes a wildly successful international arms dealer who earns the title LORD OF WAR. The business of war is apparently lucrative for a few, but always dangerous and ethically off the charts. Yuri (Nicholas Cage) convinces his younger brother, Vitali (Jared Leto), to give up on the family restaurant and begin a “brothers in arms” partnership. Yuri, lacking any moral compass and having a natural talent to rationalize his own actions, adjusts well to his illegal lifestyle. For his part, Vitali finds comfort in his drug use, numbing his heart from the pain he sees on the battlefields.

Soon, Yuri is selling AK-47s by the kilo, offering tanks and military aircraft to third world countries, and finding buyers for his weapons of mass destruction. His wife, Ava (Bridget Moynahan), initially chooses not to know the truth of her husband’s shady dealings, but later is confronted with the thought that her house and every possession in it “has blood on it.” In contrast, Yuri agrees that some things may be black or white, but confides that his personal favorite color is gray.

Meanwhile, Yuri is relentlessly pursued by squeaky-clean Interpol agent Jack Valentine (Ethan Hawke). It is noteworthy for LORD OF WAR that the main character’s enemy is really the “good guy.” Valentine is an honorable and just man who is intent on stopping or slowing Yuri’s activities. He believes this LORD OF WAR is one of those keenly responsible for the thousands of lives lost through armed conflicts, civil wars, ethnic cleansings, and revolutions; but, Yuri sees his role as a “necessary evil,” choosing not to take sides or get emotionally involved with the specifics.

LORD OF WAR is a great story of a conflicted man who ultimately faces the consequences of his actions. As Jack Valentine points out, Yuri “will one day get what’s coming to him.” Regrettably, though faced with the prospect of losing everything and everyone in his personal life, Yuri chooses to ignore his last vestiges of conscience and continue in his blood-drenched lifestyle. It seems that it is the only thing in life where he finds any self-worth.

Dodging bullets and running amid the dead bodies, Yuri keeps reminding his brother, “This is not our war.” Watching children shot execution-style or merely for sport, Yuri maintains this position. When Vitali has seen enough, he risks his life and the lucrative deal to protect people he will never meet.

This movie is cleverly made, beautifully filmed, and the story’s characters are rich and compelling. The movie comes off a little preachy at times, but raises some legitimate concerns. The United States and the other major super-powers are painted as the real thugs responsible for arming the world and its psychotic dictators. The President is even called the “biggest gunrunner in the world,” but that label is uttered by Yuri, and could well be another attempt to rationalize his own illicit behavior.

LORD OF WAR contains some valuable moral lessons, but it is drenched in violent content, strong offensive language, drug use, sexual situations, some nudity, and strong elements of political correctness. In addition, it asks viewers to unquestioningly believe purported and suspicious “facts” (such as “there are more gun shops in the U.S. than there are McDonald’s” restaurants). Though cleverly executed, LORD OF WAR shoots itself in the foot by being a little too preachy, politically correct and self-righteous about Yuri’s “profession” and about Yuri himself.