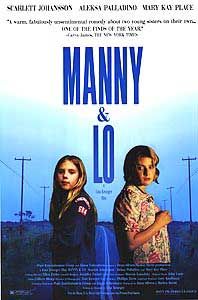 MANNY AND LO is a low budget drama about two adolescent sisters who run away from foster homes. They live life out of a station wagon until the eldest gives birth. Intimate, slow moving and off-beat, it won't likely attract much of an audience. Showing that even girls on the run need an adult who cares, it is marred by immoral behavior like underage smoking, drinking, obscenities, and stealing.

MANNY AND LO is a low budget drama about two adolescent sisters who run away from their foster homes. Manny is a 16-year old cussing, station-wagon driving, runaway who bosses her 11-year-old sister Lo around as they drift. Manny seems bitter about life in general because she is pregnant. She stops by an abortion clinic to “have it taken care of,” but the nurse stalls, so, Manny storms off on a rage and decides that they need to find a hideout where she can give birth. They go back into the woods and find an empty winter cottage. Back in town, they kidnap a nurse named Elaine and bring her back to the cottage. Frightened, Elaine eventually warms to the girls. Elaine must decide to run away or help Manny through her labor.

MANNY AND LO starts out as a gritty, dirty drama about adolescent angst, but turns into a warm touchy feely movie. Both girls act admirably, but Mary Kay Place turns in one of the most unusual roles this year as a walking baby-book with a cluttered past. However, the movie is so vague that no lesson seems to be learned. Manny swears a lot, drinks, smokes, acts bossy, and generally practices self-destructive behavior. Without a lot of entertainment value, it will probably fade into obscurity.