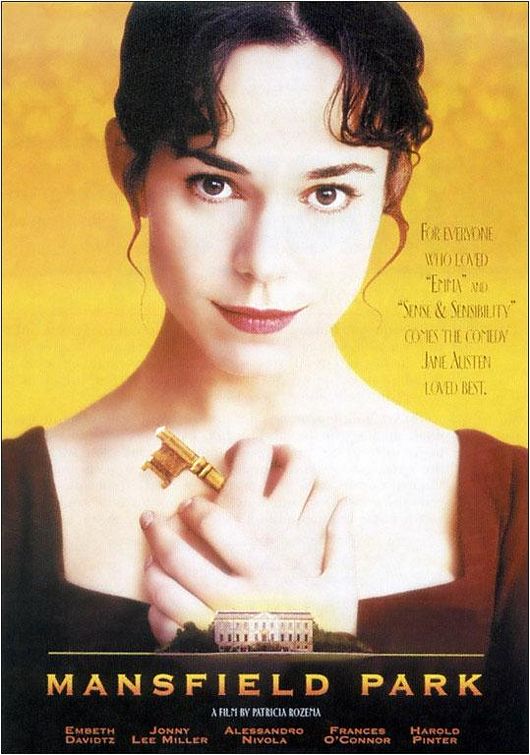 Based on Jane Austen's third novel, MANSFIELD PARK delves into the early 1800s with a tangled love story characteristic of Austen's works. The movie depicts a young woman who refuses to compromise her heart. There is an obvious struggle to maintain her character in a den of sinful characters who commit adultery, betray other people and belittle those who make right choices.

Touted as Jane Austen’s most controversial novel, MANSFIELD PARK triggers the same ups and downs of romance as other films based on her novels (EMMA and SENSE AND SENSIBILITY). The central character is a reflection of Austen herself, a young, strong-willed woman who refuses to compromise her heart because of a fear of poverty and loneliness. Her struggle for love is hindered not only by her callused extended family, but by society as well. MANSFIELD PARK, while not quite Cinderella-like in content, is a fairy-tale depiction of the issues and realities of the early 1800s.

In the story, 10-year-old Fanny Price (Frances O’Conner) is sent away to live with her wealthy uncle, Sir Thomas Bertram (Harold Pinter), and aunt, Lady Bertram, in Mansfield Park. Upon her arrival, her Aunt Norris and two cousins, the Bertram daughters, immediately treat her as inferior. Her cousin Tom is estranged from the family and is often away. His brother, Edmund, is different from the others, showing immediate compassion to the distressed Fanny upon her arrival.

Fanny pours out her deepest feelings onto paper – journals and letters filled with her inward thoughts and an imaginative historical interpretation of the history of England. She shares these writings with Edmund, who becomes a confidant and trustworthy companion. Over the years the feelings between the two grow and develop into something quite different. As a young woman, Fanny is beautiful, yet her sharp-tongue reflects her modern thinking and writings. These personality traits are further revealed upon the arrival of Henry (Alessandro Nivola of BEST LAID PLANS) and Mary Crawford (Embeth Davidtz of SCHINDLER’S LIST), a brother and sister who turn Mansfield Park into a showcase of affections and turmoil while Sir Thomas is away on business.

Edmund becomes interested in Mary, though she makes negative statements about his desire to become a clergyman. Fanny is hurt by their relationship and is even more unwilling to accept the fact that Henry has gained interest in her. His regard for her suddenly thrusts her into a more prominent place in society, a position to which she is unaccustomed. She refuses Henry, yet he persists and eventually asks for her hand in marriage from Sir Thomas. Fanny rejects Henry’s proposal against the wishes of Sir Thomas, who orders her to return to her impoverished family in Portsmouth. Henry brings his pursuits there, yet she continues to waver. Her heart is still with Edmund, who writes her about his growing relationship with Mary.

A sudden illness of his brother brings Edmund to Portsmouth, asking for Fanny’s help. The two realize they are closer in their feelings to one another. Sir Thomas welcomes her return to Mansfield. A more independent Fanny holds herself up against her Aunt Norris and cousins. The Crawfords arrive, and there is much animosity between Henry and Fanny. When Fanny discovers her cousin committing adultery with Henry, her decision not to marry Henry proves to be a wise one. Meanwhile, Mary reacts to her brother’s behavior by trying to ‘mend’ the societal view of the Crawford and Bertram names. This revelation of her ill intentions spurns Edmund not only away from her, but eventually closer to Fanny, realizing his true love.

MANSFIELD PARK is not without the intricate contest for the trophy of true love, characteristic of Austen’s writing, yet this movie has a bit of a darker theme to it. Outer appearances of societal decency become a mere facade for scandals involving adultery, slavery (though never depicted) and deceit. Throughout the movie, issues of education and the church are debated with both biblical and anti-biblical undertones. Characters desiring to make right decisions are pursued by those with ill motives and liberal mindsets. This mismatch of standards confuses the main characters for a short while, but truth and standing up for what is right ultimately prevail.

After 200 years it is interesting to note how society’s view of adultery has softened not only in consequence, but also in shame. The movie depicts the act as scandal, pushing the families involved to regain the damage done to their names. This contrasts greatly to films reflecting current standards, where the infidelity of a president is met with little or no consequence. Though the film contains some stronger adult content than other Jane Austen movies, MANSFIELD PARK is a refreshing look at moral virtues prevailing over worldly desires.

Writer: Patricia Rozema BASED UPON THE NOVEL BY: Jane Austen