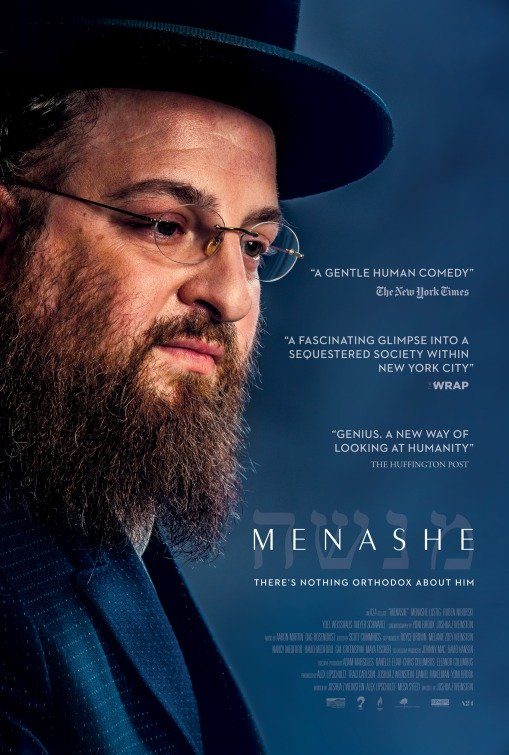 MENASHE is a drama set in New York City’s Hasidic Jewish community. It tells the story of Menashe, a struggling widower battling for custody of his son against strict religious requirements. The local rabbi and others pressure Menashe to remarry to create a stable home. Until then, his son must stay with his uncle. However, Menashe takes matters into his own hands and tries to provide a home for his son, while also trying to singlehandedly plan his wife’s memorial service.

Filmed in Yiddish language with Hasidic non-actors, MENASHE provides a rare insight into the life and struggles of the orthodox Jewish community. This fascinating milieu is grounded in solid, human performances that make the movie accessible to all audiences, even if they don’t understand references to specific religious elements. MENASHE contains positive references to Scripture and biblical values. Many of the movie’s themes are universal, such as a son’s need for a strong father. However, caution is advised due to MENASHE’S depiction of a religion based on good works and rituals rather than relying on salvation by God’s grace through faith.

(BB, FR, N, AA, M) Strong moral worldview with positive references to Scripture and biblical values in a story about a man struggling against the strict rules of his Hasidic Orthodox Judaism, which stresses rules, regulations and outward cleanliness as a way of becoming inwardly clean, with many references to the Talmud; no foul language; no violence; no sexual content; brief upper male nudity as a character enters a bath; four scenes involving alcohol consumption including a scene of drunkenness with children present; no smoking or drugs; and, man takes matters into his own hands against his community.

Set in the devout Hasidic community of New York, MENASHE tells the story of a struggling widower battling for custody of his son amid strict religious requirements. The movie is well-acted, well-made and gives a genuine, heartfelt look into an underrepresented community, while also telling a universal story. While there are many references to quoting scripture and proper moral virtues, the movie highlights many aspects of the Orthodox Jewish religion that are contrary to Christian beliefs.

When first introduced, Menashe is a quiet, well-meaning convenience store clerk in his late 30s living in the Hasidic heart of New York City. Menashe means well. He works hard at his underpaid job and abides by all the laws of cleanliness and scripture reading that his religion requires. Yet, Menashe is also an underachiever. In a society that puts extreme emphasis on home and family, he’s a simple widower who’s no longer allowed to live with his son, Rieven, until he can remarry and provide a stable home. His life has become routine, boring and uneventful. He has stopped wearing a coat and hat on a daily basis, as if to say that his day-to-day routine doesn’t merit fancy dress. He refuses to remarry and constantly argues against both his rabbi and his late-wife’s brother, Eizik, who has taken Rieven in to be raised in a decent home.

When Eizik disrespectfully announces that he’ll be hosting the memorial dinner for Menashe’s late wife, Menashe takes matters into his own hands. He removes Rieven from his brother-in-law’s home. Then, without the permission of their rabbi, he brings Rieven home to raise him on his own. While it’s clear that Menashe loves his son and is a good father, he is in over his head as he tries to raise the boy alone.

On a technical level, MENASHE has many strengths. Writer/Director Joshua Z Weinstein uses his documentary background to create a real, slice-of-life feel with beautiful cinematography. Entirely in Yiddish with Hasidic non-actors, the movie provides a rare insight into the life and struggles of living in the orthodox Jewish community. It’s a fascinating milieu to explore that’s grounded in solid, human performances that make it accessible to all audiences even if they don’t understand references to specific religious elements.

The caution of watching stems from the ability to mine the good, moral principles from the emphasis on following rules and practices rather than relying on God’s grace. Many of the movie’s themes are universal, such as a son’s need for a strong father in his life, what it looks like to dedicate oneself to a belief, and it’s almost refreshing to see a lifestyle that holds family and community in such high regard. These are strong biblical principles for all followers of the Old Testament, whether in Judaism or Christianity.

The movie also highlights the negative impacts of such a strict religious tradition. The Hasidic community puts such an emphasis on a stable family home that they won’t let Menashe raise his son if he doesn’t first remarry. Throughout the movie, many of the characters are seen washing themselves, keeping clean, reciting prayers, and making sure everything is kosher. Menashe explains this principle by saying that outward cleanliness is the way to inward cleanliness.

Yet, Menashe seems miserable with this life and resentful at the pressures that Eizik and his rabbi put on him. There are numerous scenes where he’s seen drinking, including one scene where he takes his son to a party and gets so drunk that Rieven calls Eizik to pick him up. Menashe is rebuked for this by Eizik, since drunkenness is frowned upon in their community as well. It becomes clear that the religion Menashe follows, although based on Old Testament biblical principles, is one of regulations, rule-following and salvation through good works alone. While many Christian viewers can learn from an emphasis on responsibility, community and dedication to beliefs, they should ultimately be should be cautioned at the depiction of a religion based on works rather than faith. As Genesis 15:6 says, “Abram believed God and it was credited to him as righteousness.”