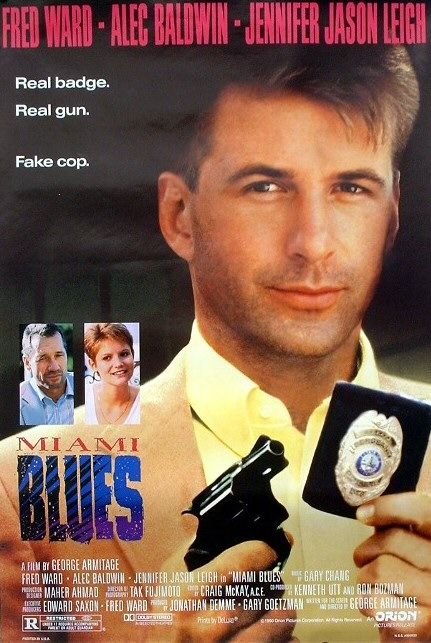 The title of this movie takes its cue from the fact that hundreds of national and international fugitives sneak into South Florida each year, making it one of the most popular havens in the country for fleeing criminals, contract killers, drug dealers, and bank robbers.

Upon arriving in Miami, ex-con Frederick Fringer assaults a Hare Krishna, then murders and assumes the identity of Herman Gottlieb, a witness to the assault. Later, Fringer shacks up with Susie, a naive, college co-ed and hooker. When Detective Homicide Sgt. Mosely arrives to question whom he thinks is Herman, he is followed home by Fringer, who violently subdues the sergeant, stealing his gun and badge.

Fringer, who wants “to live a straight life as a solid citizen,” decides to do that by impersonating a police officer. However, compulsive criminal that he is, soon returns to his vicious ways. Instead of apprehending felons at the scene of a crime, he makes off with the loot himself.

Mosely, meanwhile, has been pursuing Fringer, and finally locates him through Susie. He confronts her with the truth about Fringer. Mosely tails Fringer to a pawn shop, and in a bloody encounter the film reaches its conclusion.

The drama, action, jeopardy, and camera-work are all fair to good. However, there is not much else to commend. The act of prostitution is detailed in method, not to mention theft, robbery, and breaking and entering. The viewer sees Susie fornicating with Fringer several times, and the film infers that their low form of sexual relationship is an accepted and common thing. As for violence, there is murder, vicious assault, gun play, and an especially squeamish scene in which Fringer’s fingers are hacked off. Corruption within the police is portrayed as a common, everyday occurrence. Profanity and obscenity round out the list. Thus, you’ll get more than the blues if you sit through this film.