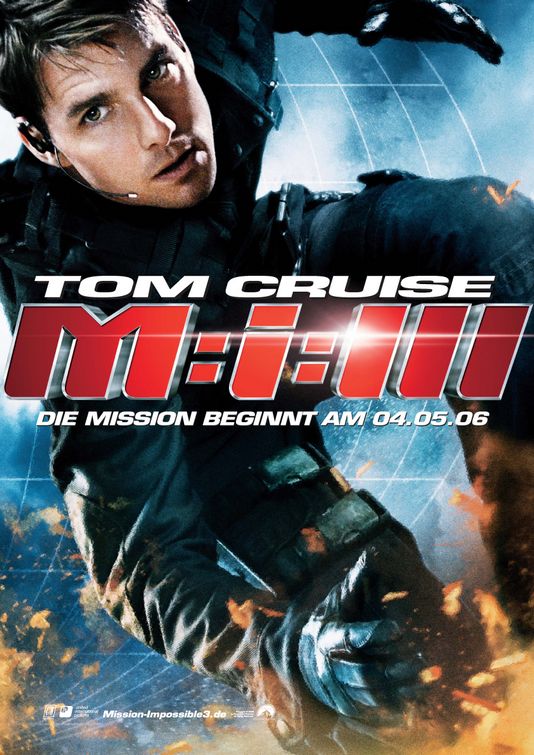 MISSION: IMPOSSIBLE III opens with a shocking sequence of events as Agent Ethan Hunt sees his new bride Julia held at gunpoint by vicious arms dealer Owen Davian. Ethan is shackled to a metal chair and Davian is ruthlessly counting down before he pulls the trigger. This tense scene sets the tone for a different MISSION: IMPOSSIBLE thriller. The story backs up a few days and Ethan's Impossible Mission team is sent to rescue an important hostage. Davian retaliates by threatening to harm Ethan's wife. Julia is abducted, and Ethan is forced to steal a mysterious weapon known only as "the rabbit's foot" in exchange for Julia's life.

This movie's fine cast, including Tom Cruise and Philip Seymour Hoffman, has collaborated to raise the bar on action thrillers. With a strong moral worldview and overt Christian content, M:I 3 is a thrill-ride, slightly marred by some foul language. The plot does not exhibit the usual political posturing or international agendas. Instead, the movie remains a story of love and desperation, relationships and trust. Pulse-pounding MISSION: IMPOSSIBLE III delivers one of the most exciting and satisfying movie-going experiences in recent memory.

(BB, CC, H, LL, VV, S, N, A, D, M); Strong moral worldview about an undercover agent trying to rescue important hostages with explicit themes of courage, sacrifice, and bravery, many positive Christian references including one scene depicting a priest praying at a funeral, a scene in which a priest conducts a marriage ceremony, and a scene in which a woman prays for an agent's protection and another agent asks to learn how to pray, with some humanist elements portrayed by antagonist which are ultimately rebuked; 22 mild obscenities and two profanities; action violence including crashes, car chases, a helicopter chase, a jet drone firing on commuters on a bridge, gun battles, explosions, fist fights, and death-defying action sequences and some implied but not depicted violence including torture situations, execution killings, a man hit by a truck, a man shocked by electricity, a man falling from a building, a woman stabbed with hypodermic needle, and agents injected with explosive capsule; minor sexual content including a married couple kissing passionately in closet, implied fornication as engaged couple wake in bed together; brief nudity including a couple of scenes of upper male nudity as well as a cutaway glimpse of a woman removing her blouse; brief smoking; brief alcohol use; and, revenge, drug-trafficking and deception.

Pulse-pounding MISSION: IMPOSSIBLE III delivers one of the most exciting and satisfying movie-going experiences in recent memory. Take a bow, director J.J. Abrams, because you have proven yourself with this one.

M:I 3 opens with a shocking sequence of events as Agent Ethan Hunt (Tom Cruise) sees his new wife, Julia (Michelle Monaghan), held at gunpoint by vicious arms dealer Owen Davian (Philip Seymour Hoffman). Ethan is shackled to a metal chair and Davian is ruthlessly counting down before he pulls the trigger. These tense and terrifying opening scenes set the tone for a very different MISSION: IMPOSSIBLE thriller.

After these emotional moments (which end with an execution) and the series’ trademark fire-lit match and driving score, the story backs up a few days to Ethan and Julia’s engagement party. Top secret agent Ethan Hunt is now in love and publicly maintains that he works for the Department of Transportation. He has convinced himself that he can remain in the IMF agency, teach agents covertly, and still enjoy a safe and innocent family life in the real world, but the party is interrupted as Ethan is pulled away for an emergency assignment.

Ethan’s team is successful but he watches a fellow agent die in the line of duty. So, despite criticism and strong warnings from his new Director (Laurence Fishburne), he decides to bring Davian to justice, but Davian is elusive and threatens to find and harm Ethan’s new bride. Soon, Julia is abducted and Ethan is coerced to steal a mysterious weapon known only as “the rabbit’s foot” in order to exchange it for Julia’s life. Too soon, this story returns to the harrowing opening scenes of MISSION: IMPOSSIBLE III.

Notwithstanding all the explosions and ear-piercing gunfire, this story surpasses its predecessors with wrenching drama and a fixed focus on relationships. Credit again goes to new director Abrams for infusing tension and terror into a series seemingly on a collision course with its own absurdity.

This is not your typical, overproduced spy caper dependent upon implausible Bond-gadgetry, lingering views of exotic locales, and beautiful agents. Sure, Abrams includes just enough of these elements to be tantalizing, but he also shows he has learned a few tricks from his hit TV series, ALIAS and LOST. He succeeds here by taking the best elements of those shows and making them key components of M:I 3. Best of all, the plot does not get mired in the usual tired political posturing or international agendas. It remains a story of love and desperation, relationships and trust.

It is often said that a thriller is only as good as its story’s villain. Again, Abrams delights us with an unusual choice in Philip Seymour Hoffman, a recognizable “unknown” with an Academy Award (Best Actor, CAPOTE) and an impressive portfolio of obscure character acting roles. Hoffman’s villain may be merciless but he is also frighteningly normal, which is perhaps why he is so convincing. As a result, MISSION: IMPOSSIBLE III is a dramatic action thriller at the peak of its game.

Although MOVIEGUIDE(r) cautions that the movie has foul language and lots of action violence, in the final analysis, Abrams and Cruise (and a fine supporting cast) have collaborated to raise the bar on action thrillers. Amidst all the technical advancements, it almost seems as if Hollywood has rediscovered drama. Consequently, M:I 3 is a thrill-ride for adults and teenagers alike.