"The Wild Imagination of Lunar Disaster" 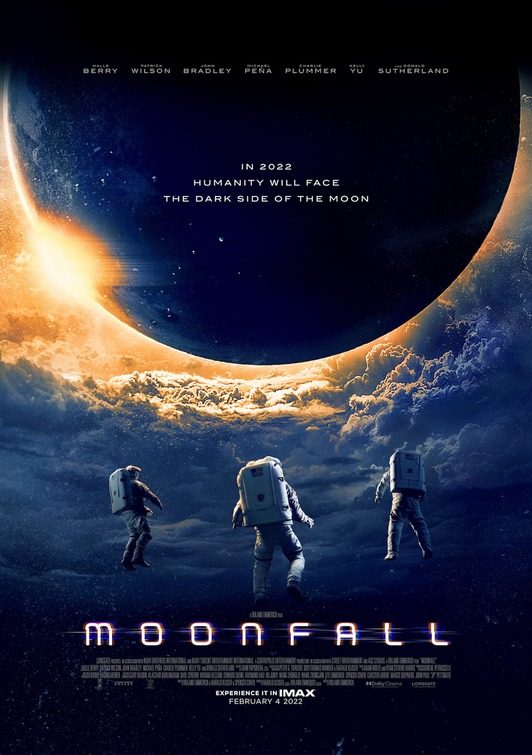 MOONFALL is a science fiction thriller about a NASA official, a former astronaut and an amateur scientist who discover the moon is a hollow ark made by aliens. An evil artificial intelligence has altered the moon’s orbit to destroy the Earth and all of humanity. The military plans to nuke the moon as it enters the Earth’s atmosphere. However, the three heroes plan to take a space shuttle to the moon and use an EMP device to kill the artificial intelligence. They hope that will let the alien machinery inside the moon move the satellite back into place.

MOONFALL has many fun, exciting, humorous moments and spectacular special effects. However, the plot is overloaded with too many challenges for the three main heroes and their families. As a result, the movie has some silly, unbelievable situations and dialogue. MOONFALL also contains excessive foul language. Even worse, it presents a materialist, humanist history to man’s presence and existence on Earth. This humanist viewpoint supersedes the movie’s pro-family content and two positive references to God in the script. So, MOVIEGUIDE® advises extreme caution for MOONFALL.

(HH, Ev, BB, CC, LLL, VV, A, M):
Dominant Worldview and Other Worldview Content/Elements:
Strong humanist, materialist worldview about the origins of the moon and of human beings, including a few implied nods to the idea of evolution, mitigated by some strong pro-family, redemptive, morally uplifting content about taking care of one’s family, sacrifice, helping other people, two positive references to God
Foul Language:
About 28 obscenities (including one verbal “f” word and an “f” word written on a space shuttle), two JC profanities, one GD profanity, six light profanities, and man says he has IBS, Irritable Bowel Syndrome
Violence:
Strong action violence in a science fiction setting includes an artificial alien intelligence kills four astronauts and sends a spacecraft spinning, woman astronaut is knocked out, a vehicle chase scene with three thugs includes a gun battle during the chase and vehicles spinning, sliding on snowy mountain roads and trying to avoid meteors exploding and a large 18-wheeler sent flying when the moon’s gravity approaches Earth’s atmosphere and starts sucking objects up into the air, helicopter explodes when a large gravity wave from the ocean caused by the moon approaches the chopper, ocean waves flood a town and a hotel, one man almost drowns when the wave splashes into the hotel’s lobby, chase inside the moon (which is shown to be an alien artifact with small spaceships, a gigantic gyroscope mechanism and panels of hydroponic agriculture) between a space capsule and an artificial intelligence swarm of nanobots, man trapped under a tree, another man gives up us oxygen mask for his daughter, many meteors explode on Earth as the moon starts to break up upon approaching the planet, etc.
Sex:
No sex or sexual immorality
Nudity:
No nudity
Alcohol Use:
Brief alcohol use
Smoking and/or Drug Use and Abuse:
No smoking or drugs; and,
Miscellaneous Immorality:
Looting, vandalism, car theft, government conspiracy.

MOONFALL is a science fiction thriller about a NASA official, a former astronaut and a quirky amateur scientist who discover that the moon is a hollow ark made by aliens and band together to stop it from impacting Earth when an evil artificial intelligence alters the satellite’s orbit. MOONFALL has some fun, exciting moments and spectacular special effects, along with pro-family, redemptive content, but it contains strong foul language, and the second half gets a bit silly at times and presents a materialist, humanist history to man’s presence and existence on Earth.

The movie opens in 2011 during a space mission by three astronauts, Jocinda Fowler, Brian Harper and Alan Marcus. Harper and Marcus are outside the spacecraft fixing a satellite when a snake-like swarm of metal-looking objects attacks them, sending them and the spacecraft spinning. Fowler is knocked unconscious, and Marcus disappears into space.

Back on Earth, NASA blames Harper for the accident, and Jocinda doesn’t support his story because she was knocked unconscious. NASA fires Harper, and he becomes a bitter man, feeling betrayed.

Ten years later, Harper and his wife are divorced, and their son, Sonny, has become a wild young man. Harper’s wife has remarried a Lexus dealer, and they have a young daughter. When Sonny, who just turned 18, and a friend are arrested for joyriding, Harper shows up at Sonny’s court hearing. However, he irritates the judge, who orders Sonny to be held in jail over the weekend.

Meanwhile, a nerdy conspiracy theorist and amateur scientist, K.C. Houseman, discovers that the moon has changed its orbit. Houseman thinks the moon is actually a hollow, artificial, megastructure satellite built by aliens. He tries to alert the authorities, including Jocinda Fowler, who now has a high scientific post at NASA. He also tries to alert Harper. However, no one listens to his crazy story, so he releases his findings on the Internet, causing a sensation.

At the same time, Fowler and her team look at Houseman’s figures and discover that he’s right. Not only has the moon changed its orbit, it’s also headed for a collision with Earth in three weeks. She alerts NASA and her boss, but NASA hides the fact about the collision course and her boss resigns, handing her his job.

With Fowler leading the project, NASA sends a capsule with three astronauts to investigate a large hole that’s appeared on the surface of the moon. However, the same artificial intelligence swarm that attacked Harper and Marcus 10 years ago, attacks the capsule and kills the three astronauts as Fowler and the folks at NASA Mission Control watch on their monitors.

It soon becomes clear to everyone on the planet that the moon is indeed headed on a collision course with Earth. The military secretly decides to nuke the moon when it enters the atmosphere. However, Fowler decides she needs Harper to manually pilot a shuttle to the moon so two military people can use an EMP device to destroy the artificial intelligence. They figure that the AI has programmed itself to watch out for the new electronic systems that have become part of daily life and part of NASA’s computers. Harper brings Houseman along with him to help them on the ground.

Eventually, circumstances force Fowler and Houseman to come along with Harper on his journey to the moon. Will they find out the truth about the moon’s hollow interior? Can they destroy the artificial intelligence and restore the moon’s orbit before all of humanity is destroyed?

MOONFALL has many fun, exciting, humorous moments and spectacular special effects. John Bradley is very funny as Houseman, the nerdy conspiracy nut and amateur scientist. However, MOONFALL’s plot is overloaded with obstacles for the characters to overcome. For example, the movie has a very involved subplot where Sonny, Harper’s teenage son, tries to drive Fowler’s young son and her son’s Chinese nanny to Colorado, where Fowler’s ex-husband, a military general, is helping the team that’s getting ready to launch the nukes when the moon hits the Earth’s atmosphere. On the way to Colorado, their car gets stolen by three thugs, which forces them to walk to the fancy mountain cabin where Sonny’s mother and stepfather magically have a car. This subplot takes attention away from Harper and Fowler’s moon mission. It also becomes rather silly, especially when the three thugs show up again and when Sonny gets trapped under a tree limb because of the chaos caused by the moon’s gravity bearing down on Earth.

MOONFALL also has excessive foul language, including two “f” words and three strong profanities. Even worse, though, it presents a materialist, humanist history to man’s presence and existence on Earth. This false humanist viewpoint overwhelms the movie’s pro-family content and two positive references to God in the script. So, MOVIEGUIDE® advises extreme caution for MOONFALL. Moviegoers should also note that MOONFALL is an American-Chinese co-production, so it contains about two positive references to the Chinese government, which is run by the despotic Chinese Communist Party.