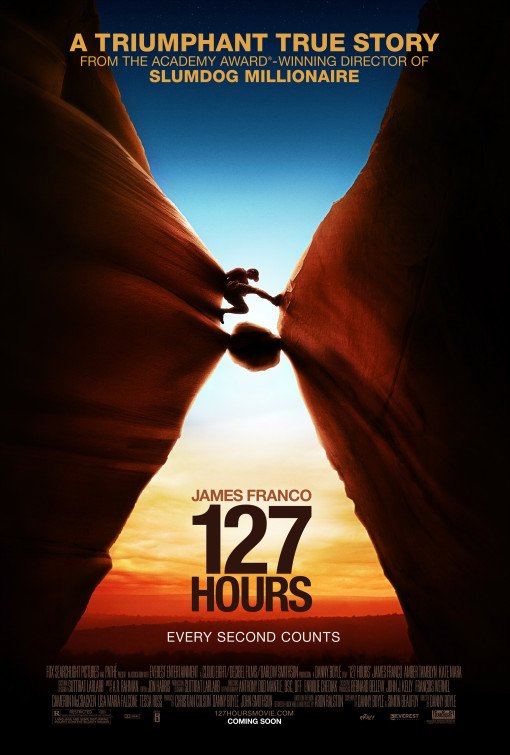 127 HOURS begins with Aron Ralston, a young rock climber, rushing around his house, getting ready for his jaunt to Blue John Canyon in Utah. He ignores his mother’s phone call and hops in his truck. After stopping in the desert, Aron frantically bicycles miles further. Then, he takes off with his backpack. Along the way, he helps two young women find their way while showing them a fabulous underground lake. Then, he’s off on his own to the canyon’s narrow confines. Suddenly, however, he’s slipping and sliding to the bottom of a narrow crevice, while a large rock pins his right arm against the canyon wall.

127 HOURS features a striking performance by James Franco as the true-life Aron. He depicts Aron as a rather cocky, exuberant fellow before life throws him a curveball. What follows is an intense personal journey. The movie is also a light morality tale as Aron re-examines his life during his isolation. Director Danny Boyle doesn’t flinch when it comes to the scene where Aron cuts off his arm, but most viewers probably will. There’s also strong foul language and brief innuendo, so extreme caution is advised.

(B, LL, VVV, S, N, M) Light morality tale about a man who re-examines his life during a harrowing incident, including some support for family life, especially at the end, plus man lifts his head and seems to say thanks to God but he doesn’t say the word God; 21 obscenities and three or four light profanities, plus stranded rock climber has to urinate and drink his own urine when his water runs out; in a very bloody and excruciating scene, rock climber has to cut off his right arm after five days because it’s stuck between a large rock and a narrow canyon wall; light sexual content includes implied fornication with a girl in a flashback, kissing and man lusts about the torso of the last girl he met and considers doing something about it but he stops; upper male nudity and some shots of female cleavage but no salacious nudity; no alcohol use; no smoking or drugs; and, a man’s hubris gets knocked down a peg and young women invite young man to party later.

127 HOURS is the striking true story of Aron Ralston, the young mountain climber who had to cut off his right arm in 2003 when he got stuck by a large immovable rock in a narrow canyon in Utah.

The movie begins with Aron rushing around his house, getting ready for his jaunt to Blue John Canyon. He ignores phone calls from his mother and sister, and fails to snatch the Swiss army knife just barely out of his reach on a shelf.

On his way to the canyon, Aron frantically rides miles on his bike. Then he takes off with his backpack, rope and water. Along the way, he helps two young women find the place they want to go. In the meantime, they swim together in a fabulous underground lake.

Then, Aron’s off on his own to the narrow confines of Blue John Canyon, named after the cook in Butch Cassidy and the Sundance Kid’s “Hole in the Wall” gang. Suddenly, however, he’s slipping and sliding to the bottom of one crevice, and a large rock pins his right arm against the canyon wall.

Aron is at first sanguine about his predicament. He tries chipping away at the rock with a hard plastic knife that replaces the steel army knife he left behind in the house. Unhappily, the slightly smaller rock just seems to lodge itself even more firmly against his hand and arm. As Aron starts running out of water, he re-examines his life. Will the two young women be the last people he ever met?

127 HOURS starts off at a frenetic, splashy, intense pace. In fact, that’s how James Franco plays the driven hero of the piece, Aron Ralston. Then, Aron finds himself, as the title of his own book says, between a rock and a hard place. What follows is an intense, harrowing, provocative tale.

The movie’s main metaphor is the rock that pins Aron’s arm. The movie intimates that every person has a rock in their life that presents a major obstacle or turning point in their life. How they deal with the rock will determine their future. In 127 HOURS, the rock in Aron’s life presents both an obstacle and an opportunity. Ultimately, he faces the rock in his life with perseverance and grit.

Of course, the ultimate rock in everyone’s life is the Rock of Ages, Jesus Christ. As Paul writes in Ephesians 2:19-22, Jesus Christ is the “chief cornerstone” of the temple and dwelling “in which God lives by His Spirit.” Jesus is our Rock of True Salvation.

Director Danny Boyle doesn’t flinch when it comes to the scenes where Aron has to cut off his arm, but most viewers probably will. This movie also contains some strong foul language and brief sexual innuendo as Aron thinks about a woman he just met and an earlier relationship. Thus, MOVIEGUIDE® advises extreme caution.