"Love Reigns, But Foul Language Does Not" 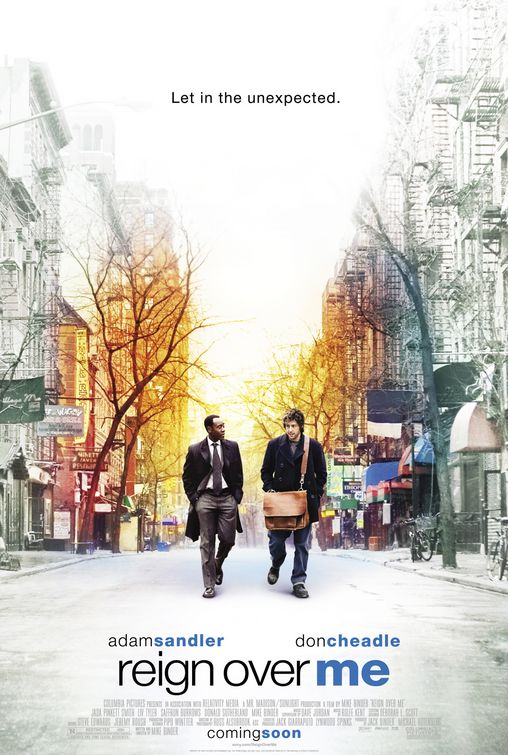 REIGN OVER ME stars Adam Sandler and Don Cheadle. The story opens in New York City with Alan, a black dentist overwhelmed by his family and career responsibilities. Alan spots his old college roommate, Charlie. Once a successful dentist himself, Charlie lost his family on one of the planes the Muslim terrorists rammed into the World Trade Center. Now, Charlie has left the dental field and retreated from life. He doesn't even want to remember anything about his dead wife and three dead daughters. Both Charlie and Alan are in need of a trusted friend at this pivotal moment in their lives. Their friendship is threatened, however, when Alan tries to help Charlie recover from the grief that damaged his mental stability.

REIGN OVER ME is a powerful drama about people helping friends cope with death and tragedy. It is alternately funny, sad, warm, and insightful. The movie is morally uplifting, but some crude sexual talk and lots of strong foul language are a major drawback. Also, the two main characters don't turn to God or Jesus Christ, the real Divine Source of all that is good, good, noble, just, and true.

(Pa, BB, H, C, Ho, LLL, V, S, N, A, M) Lightly mixed pagan worldview with strong moral content extolling love, friendship, caring, and perseverance, an occasional pagan attitude toward sex comes, and a light humanist perspective that supports humanist psychiatry and talking things over with people but which seems to be ultimately diminished in favor of the idea that personal confession is good for the soul, which is a Christian concept, but no positive references to God or Jesus, plus very brief reference to homosexuality; very strong foul language includes at least 63 obscenities (including 20 or so "f" words), six strong profanities, one light profanity, man uses the term "faggot" on his friend but says that the use here shouldn't be offensive because his friend is not homosexual, and some vulgar talk; angry man splashes contents of his soda on another man, man gets angry and wrecks part of an office, men play video game where character with a sword and bow attacks monsters, and man tries to commit suicide by pointing a gun at armed police; no sex scenes but some crude sexual talk, recently widowed woman makes crude sexual advance on married dentist but he rebuffs her, and married couple lie in bed together; upper male nudity in scene from a movie; alcohol use; no smoking; and, people have mental problems, storyline refers to psychiatry, lying, and man withdraws from his relatives and friends.

REIGN OVER ME is a powerful drama about people helping friends cope with death and tragedy. The movie works because of two excellent performances by Adam Sandler and Don Cheadle, but the story contains very strong foul language and some crude sexual talk. Also, although the solutions presented are morally uplifting and insightful, there are no references to God, who tells us in the Bible that He will bear our burdens, including the burden of grief.

The story opens in New York City with Alan Johnson (Cheadle), a handsome black dentist overwhelmed by his responsibilities at work and toward his beautiful wife, children and his two elderly parents. Alan spots his old college roommate Charlie Fineman (Sandler) on the streets. Once a successful dentist himself, Charlie lost his family, including the pet poodle, on one of the planes that the Islamic terrorists from Saudi Arabia rammed into the World Trade Center. Now, Charlie has left the dental field and completely retreated from life. He doesn’t want to remember anything about his dead wife and three dead daughters.

Both Charlie and Alan are in need of a trusted friend at this pivotal moment in their lives. Their friendship is threatened, however, when Alan tries to help Charlie recover from the grief that has damaged his mental stability.

REIGN OVER ME is alternately funny, sad, warm, and insightful. The movie’s most dramatic moments are played perfectly by Cheadle and Sandler. The two most powerful scenes are one where Charlie finally opens up to Alan about Charlie’s family and one where Charlie makes an important confession to the in-laws whom he has shunned. Some crude sexual talk and plenty of very strong foul language are a major drawback, however. Also, the two main characters don’t turn to God, the Bible, Jesus Christ, or religious authorities to solve their problems.

As Jesus Christ tenderly tells His apostles in John 15:4,5 on the night He is betrayed, “Remain in me, and I will remain in you. No branch can bear fruit by itself; it must remain in the vine. Neither can you bear fruit unless you remain in me. I am the vine; you are the branches. If a man remains in me and I in him, he will bear much fruit; apart from me you can do nothing.” And, as Paul says in 2 Tim. 3:16,17, “All Scripture is God-breathed and is useful for teaching, rebuking, correcting and training in righteousness, so that the man of God may be thoroughly equipped for every good work.”

Instead of turning to God or Jesus, however, the movie just tells people to help and love one another. In fact, a predominant musical theme is the lyric “Love Reign O’er Me” from a song by the rock group The Who. This is also good advice (see 1 Cor. 13:13), but, unless God or Jesus Christ is also involved, it will remain an ineffective platitude that lacks the real moral and spiritual power of the Personal Divine Source of all that is good, noble, just, and true.

“Lay not up for yourselves treasures upon earth, where moth and rust doth corrupt, and where thieves break through and steal: but lay up for yourselves treasures in heaven, where neither moth nor rust doth corrupt, and where thieves do not break through nor steal: for where your treasure is, there will your heart be also. . . . Take no thought for your life, what ye shall eat, or what ye shall drink; nor yet for your body, what ye shall put on. Is not the life more than meat, and the body than raiment? Behold the fowls of the air: for they sow not, neither do they reap, nor gather into barns; yet your heavenly Father feedeth them. Are ye not much better than they? Which of you by taking thought can add one cubit unto his stature? And why take ye thought for raiment? Consider the lilies of the field, how they grow; they toil not, neither do they spin: and yet I say unto you, that even Solomon in all his glory was not arrayed like one of these. Wherefore, if God so clothe the grass of the field, which today is, and tomorrow is cast into the oven, shall He not much more clothe you, O ye of little faith? Therefore take no thought, saying, What shall we eat? or, What shall we drink? or, Wherewithal shall we be clothed? (For after all these things do the Gentiles seek:) for your heavenly Father knoweth that ye have need of all these things. But seek ye first the Kingdom of God, and His righteousness; and all these things shall be added unto you.”