A LEAGUE OF THEIR OWN 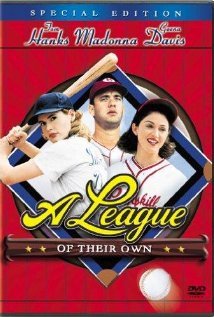 With Madonna playing outfield and Geena Davis doing some fancy catching for the Rockford Peaches, A LEAGUE OF THEIR OWN tells the true story of the All American Girls Professional Baseball League formed in 1943. The movie, although slow-paced, uneven and containing some offensive language, holds some historical interest.

(B, LL, V, A/D) Teamwork and self-sacrifice are emphasized in this movie marred by: roughly 15-20 obscenities and a few profanities; fist-fighting violence when women fight each other; and, drunkenness.

With Madonna playing outfield and Geena Davis doing some fancy catching for the Rockford Peaches, A LEAGUE OF THEIR OWN tells the true story of the All American Girls Professional Baseball League that began in 1943. Since the men are busy fighting the war, scout Harvey and former baseball great, Jimmy Dugan, decide to organize women’s teams. Jimmy reluctantly gets involved coaching, but loathes being saddled with a bunch of women ball players. However, the gals do pretty well as they travel throughout the Midwest playing other teams. The Peaches wind up in the World Series and even make it to the Hall of Fame, along with Jimmy Dugan.

A LEAGUE OF THEIR OWN is not an outstanding film, but it does have its moments. The fact that the film is based on a true story, contributes to the interest, but in general, there is not much to recommend this slow-paced, uneven film. Unless, that is, you can’t wait to see Madonna play ball. Furthermore, each of the women proved their tenacity by putting the team’s good above their own desires. However, some of the quite offensive language and expressions will put A LEAGUE OF THEIR OWN off limits to many viewers.

Watch A LEAGUE OF THEIR OWN: