"Revenge of the Losers" 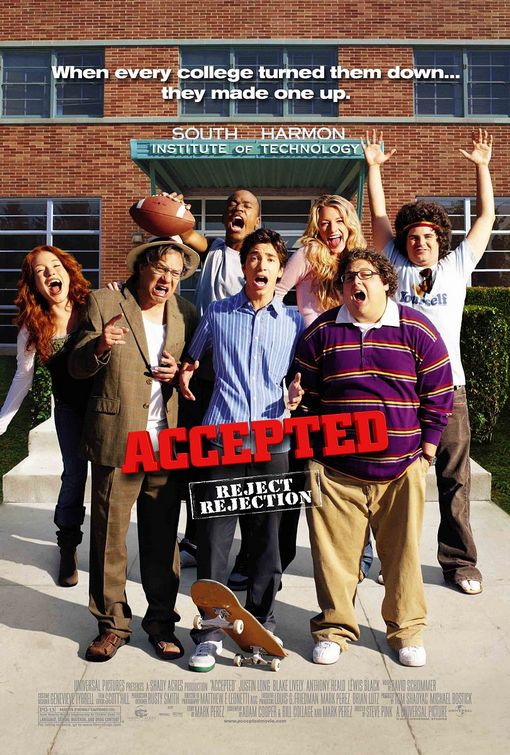 ACCEPTED is a formulaic and occasionally funny comedy about a handful of college rejects who somewhat unwittingly manage to start their own college. They are led by Bartleby Gains, a clever high school graduate played by Justin Long. Fake letters and a phony website aren’t enough to convince Mom and Dad. So, they lease and renovate an old mental health asylum. Their plan to quietly weather the academic year playing video games while Mom and Dad think they’re giving it the old college try hits a snag. That happens when a couple hundred new students, lured by the fake website, show up ready to matriculate. Also, when Bartleby's parents demand to meet the dean, he hires an alcoholic former academic (portrayed by Lewis Black) to play the part.

ACCEPTED relies on a host of clichés but contains some funny moments and good performances. Most of the laughs belong to Jonah Hill, who plays Bartleby’s best friend Schrader. His one-liners and endearing fat-boy who wants to be a frat-boy shtick buoy the absurdly predictable script. MOVIEGUIDE advises extreme caution, however, because of the movie's crude sexual humor, foul language and Romantic worldview.

Herman Melville gave us the story of Bartleby the Scrivener, the copyist in a law office who one day declares that he simply prefers not to work. He nevertheless continues to show up at work everyday but refuses to lift a finger for his employer. It would be a stretch to say that Melville’s cautionary tale of modern man’s disillusionment with the dehumanization of work is the ideological inspiration for ACCEPTED, but even absurd post-teenage comedies have to come from somewhere.

Bartleby Gains (played by Justin Long) has been rejected from every college to which he’s applied. For various reasons (some ridiculous, some credible) so have a handful of other graduating seniors. Rather than doing what any other college hopeful in this situation might do (no one in this movie has apparently ever heard of a junior college), Bartleby and company fabricate fake acceptance letters to a made-up college in an effort to assuage their parents’ demands to earn a degree. They name their college the South Harmon Institute of Technology (S.H.*.T). Despite being so clever, fake letters and a phony website aren’t enough to convince Mom and Dad. So they lease and, with the trusty help of a peppy montage, renovate an old mental health asylum. When Mom and Dad Gains demand to meet the dean, an alcoholic former academic (Lewis Black) agrees to play the part.

Bartleby’s plan to quietly weather the academic year playing video games while mom and dad think he’s giving it the old college try hits a snag when a couple hundred new students show up ready to matriculate. Seems their phony website actually sent acceptance letters to all who applied. In the style of movies like these, all the would-be students show up at the same time and wait en mass for their cue to enter the building.

This underachiever-verses-the-mainstream comedy relies on a host of conventions that generations of movies have codified. ACCEPTED employs them all while also borrowing heavily from other college movies: the struggle and triumph of the losers and misfits over the mainstream; a motley core group led by a charismatic but underappreciated male hero that includes at least one female and one idiot; a cardboard villain who’s almost always out to build something on land currently occupied by the protagonists (in this case it’s an addition to the university across the street); a washed-up adult who gets another shot to make a difference; a climactic trial/hearing/board meeting in which a heartfelt soliloquy carries the day; the vilification of square-jawed frat boys as sadistic jerks (probably the only realistic element in the film); and, a muddled “to-thine-own-self-be-true” doctrine that somehow alleviates the need for all rational thinking and accountability.

Despite its strict adherence to formula and its reliance on crude humor, ACCEPTED delivers some genuinely funny moments. Lewis Black’s characteristic angry-man persona works well in his role as the dean but most of the laughs belong to Jonah Hill who plays Bartleby’s best friend Schrader. His one-liners and endearing fat-boy who wants to be a frat-boy shtick consistently buoy the absurdly predictable script.

MOVIEGUIDE viewers will want to take note of the caution warnings for crude sexual humor as well as the amount of foul language. The S.H.*.T. jokes do tend to pile up.