"Because of Our Past" 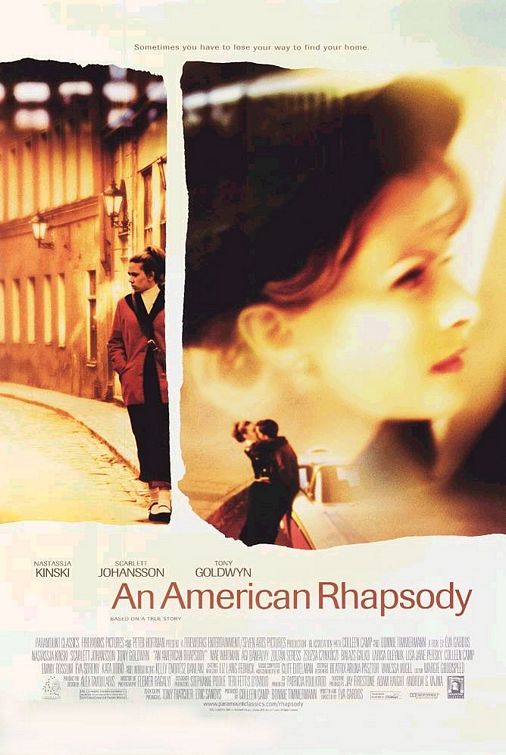 AN AMERICAN RHAPSODY tells the tale of a baby girl who was inadvertently left behind in Communist Hungary when her parents escaped. Suzanne stays with foster parents until her parents find a way to bring her to America. When she arrives, she is home sick for her foster parents and wants to go back to Hungary. This leads to family tensions, which explode when she becomes a teenager. Eventually, she returns to Hungary, where she learns about the horrors of Communism and what home really is.

Being a true story, the plot is slightly convoluted, but the power of AN AMERICAN RHAPSODY lies in the characterizations. Scarlett Johansson as the teenage Suzanne gives a great performance until the movie nears its end when she has to change from the rebellious teenager to the loving daughter. Nastassja Kinski as her real mother gives the performance of a lifetime. With only 4 lightweight obscenities, limited kisses, drinking, and obscured violence, AN AMERICAN RHAPSODY is a remarkable ode to those who braved death to flee to America. It is a message to all Americans to help us appreciate just how precious freedom is.

Based on her true story, writer and director Eva Gardos’ AN AMERICAN RHAPSODY is an incredibly poignant portrait of the angst of alienation and homelessness felt by many children of those immigrants who escaped unspeakable political oppression. These children quite often don’t understand the suffering of their parents and why they are cut off from their heritage. A renowned film editor, Ms. Garbos creates a memorable emotive movie which helped her and will help others connect with the past of their immigrant parents so that they can begin to appreciate life in America.

The movie opens in 1965 just as 15-year-old Suzanne returns to cold war Hungary to find out who she is. Quickly, the movie flashes back to 1953, where her mother is kissing baby Suzanne and preparing to leave her in order to escape to the new world. The smugglers won’t let Peter and Margit take their baby because it would be safer to sneak a baby out separately. The wisdom of this decision is shown as Peter and Margit barely evade the boarder patrol, guard towers and barbed wire that seals Communist Hungary from the free world. The slightest whimper would have caused all their deaths.

Peter, Margit and their older daughter wait in Vienna for Suzanne. A smuggler plans to sneak the baby across the boarder using a peasant woman, but Susan’s grandmother is afraid. She doesn’t want her grandchild to be drugged and stuffed into a potato sack in order to cross the boarder. Therefore, she gives Suzanne to Yuri who places Suzanne, for the time being, with a peasant family in the country.

Meanwhile, safe in Vienna, Margit is furious with her husband Peter for leaving Suzanne behind. Even so, he convinces her that they have to leave for America immediately. Every day in her new home in Southern California, however, Margit pines for her baby. She even writes President Eisenhower, the Red Cross, Eleanor Roosevelt, and surprisingly Soviet General Secretary Nikita Krushchev in order to find a way to get her child safely to the states.

Back in Hungary, the peasant foster family is taking tender loving care of Suzanne. They love her very much and treat her as their own child.

After five years in prison for helping her children escape, the grandmother comes to pick up Suzanne at her foster home. Suzanne says goodbye to the foster parents, but believes in her heart that they are her real parents. Thus, when she gets to the United States, she can’t figure out what happened and wants to go back home. Her mother, Margit, desperately tries to bond with her and her father makes a deal with little Susan that she can go back to Hungary when she is older if she wants, but she should try to like America and her real parents while she is here.

As she enters her teenage years, however, Suzanne still yearns for Hungary, and, as a result, rebels against her parents. She sneaks out nightly to drink and neck with older boys. Her mother decides to lock her in her room and hires a locksmith to install bars over her window. Susan grows so restless and frustrated that she blows open the door with a gun, but immediately recants.

As a result, at her request, Peter, her father, concedes that it is time for Suzanne to go back to Hungary. It is the wisdom of this decision which helps her come to grips with her broken past. She learns the horrors of Communism and discovers some harsh realities about her past: that her grandfather was shot point blank protecting her mother from rape by an occupying Soviet soldier; her beloved foster parents were evicted from their home by a greedy Communist bureaucrat; her grandmother suffered greatly in a concentration camp for covering up her children’s escape; and, her parents fled to America to give her new life.

Although AN AMERICAN RHAPSODY is rated PG-13, there are only 4 lightweight obscenities, limited kisses, drinking, and obscured violence. In fact, this is much more mild than many PG movies.

Though clearly low budget, this movie is very well crafted. Being a true story, the plot is slightly convoluted at times, but the power of the film is in the characterizations. Scarlett Johansson as the teenage Suzanne has to carry much of the weight of the movie. She does a good job until the movie nears its end when she has to change from the rebellious teenager to the loving daughter. Nastassja Kinski as Margit gives the performance of a lifetime and has been highly commended for it.

AN AMERICAN RHAPSODY is a love song to the children and grandchildren of those who fled persecution to the safety and freedom which is only to be found in America. It shows the pain and suffering of those hungry, tired, persecuted masses experienced. It is a message to the children and grandchildren of all immigrants and to all Americans to realize what oppression and totalitarianism is and appreciate just how precious freedom is. The movie leaves a deep emotional imprint in the mind of the viewer and plums the depths of reality without pandering to prurient interests. Since the story so closely resembles that of my wife, whose family fled oppression with only what they could carry on their person, it left my eldest son in tears (he had just returned from her former homeland).

In all, AN AMERICAN RHAPSODY is a remarkable ode to those who braved death to flee to America. As the grandmother says to Suzanne, “We are what we are because of our past.” She could have added that those who forget the past are doomed to repeat it. Let us pray that America never succumbs to the tyranny that so many of our citizens once fled.

Rent or Buy AN AMERICAN RHAPSODY: