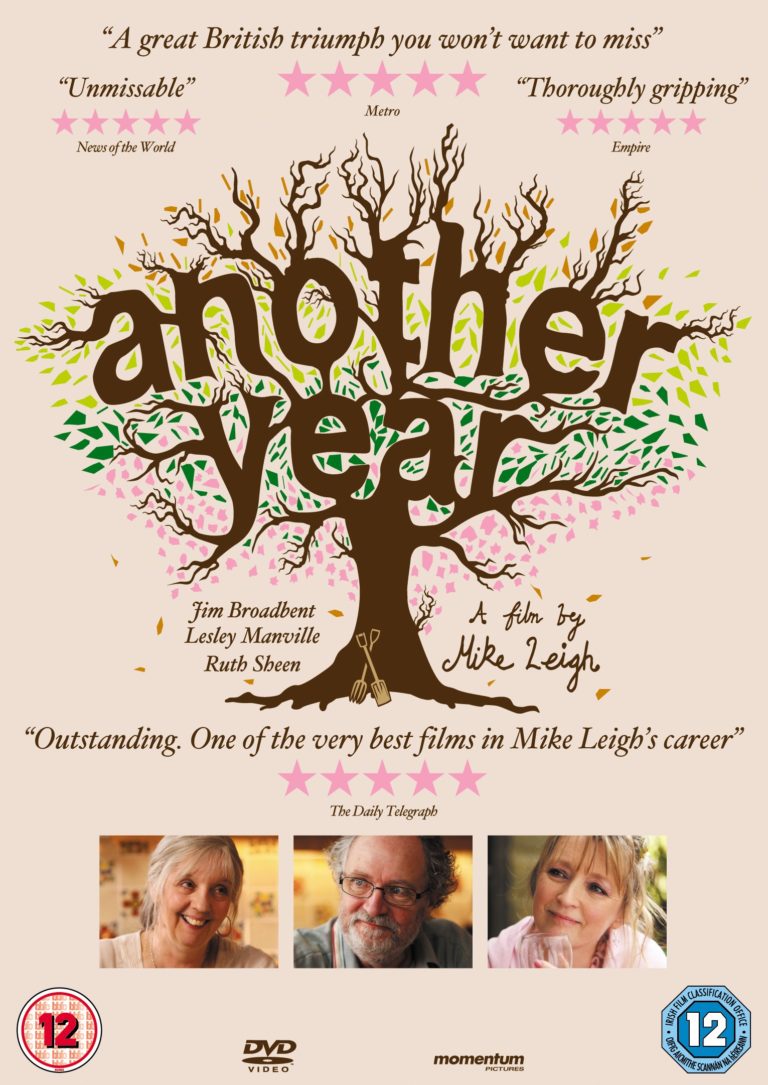 ANOTHER YEAR contrasts an aging British couple’s strong marriage with their friends and family members, who are weathering storms of unhappiness. Married more than 30 years, Tom and Gerri are just as in love now as the day they wed. Through a series of seasonal vignettes, the lives of their depressed friends and family members are explored. They include a lonely middle-aged woman, a friend who covers his depression with alcohol, their 30-year-old son who cannot find the right woman, and Tom’s brother, a grieving widower. Tom and Gerri’s marriage is the stabilizing force in everyone’s life. Their life is simple, yet their love is a testament to the power of marriage.

ANOTHER YEAR is episodic and character-driven. The pace is slow, moving and simple, yet warm and heartfelt. Tom and Gerri’s love for one another contrasts with the sad lives of the others. Sometimes, however, the other characters take center stage. ANOTHER YEAR also has some politically correct content, foul language, alcohol abuse, smoking, and brief marijuana references in one scene. However, it presents a morally uplifting view of marriage, with brief Christian references to Scripture, prayer and Jesus Christ.

(BB, CC, Pa, PC, E, ACap, Ho, LL, AA, DD, MM) Strong moral worldview with overt Christian elements includes positive, moral view of marriage and Christian funeral with Scripture read and prayer in Jesus Christ’s name, but minimized by pagan, politically correct, liberal content such as comments about the environment and leaving a carbon footprint as well as some anti-capitalist statements about big corporations, one brief homosexual joke, some troubled characters, and a brief conversation about smoking marijuana; 11 obscenities (including the British word “bloody”) and two profanities; no violence; no sexual content but man kisses woman on her cheek; no nudity; alcohol use depicted throughout and drunkenness in a few scenes due to reliance on alcohol; cigarette smoking throughout and one brief conversation about smoking marijuana; and, depression depicted in multiple characters.

ANOTHER YEAR follows an aging British couple whose marriage is the stable rock that anchors several of their friends and family members who are all individually weathering storms of unhappiness.

Tom and Gerri have been married more than 30 years. They are just as in love now as the day they wed.

Through a series of seasonal vignettes, the lives of Tom and Gerri’s depressed friends are explored. They include: Mary, a hapless, lonely middle-aged woman who drinks; Ken, a close friend of the family who covers his despondency with alcoholism; Joe, their 30-year-old son who cannot seem to find the right woman; and, Ronnie, Tom’s brother, a grieving widower.

Tom and Gerri’s marriage is the stabilizing force in the lives of everyone around them. Their life is simple, yet their love is a testament to the power of marriage.

The movie is centered on Tom and Gerri, but their characters sometime feel flat and inactive when held up against dynamic characters like Mary, the lonely middle-aged woman. As a matter of fact, Mary’s character often feels like the central character of the movie, and the actress who portrays Mary, Lesley Manville, is brilliant in that role.

ANOTHER YEAR has a positive, morally uplifting view of a good marriage, but it also has some politically correct elements of environmentalism and anti-capitalism as well as one brief homosexual joke. There is also some foul language as well as alcohol use, drunkenness, cigarette smoking throughout, and a brief conversation about marijuana. That said, these objectionable elements are brief, and detract only slightly from the positive, moral content. The movie also has some overt positive Christian content, including a Christian funeral with Scripture read and prayer in Jesus Christ’s name.

Rent or Buy ANOTHER YEAR: