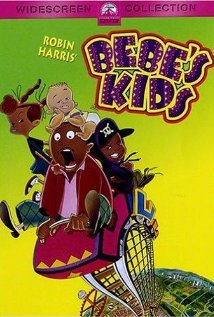 A trip to the amusement park becomes a living nightmare in BEBE'S KIDS, when two adults fail to discipline their bratty youngsters. Although BEBE'S KIDS is presented as a witty African-American cartoon, it is more disturbing than entertaining. There is nothing funny about children who wreck havoc, speak disrespectfully, and aren't disciplined.

BEBE’S KIDS begins when Robin asks Jamika, a divorcee with a 7-year-old son named Leon, out. She accepts provided Leon and her girlfriend BEBE’S KIDS come along. Heading out to FUNWORLD, the local amusement park, BEBE’S KIDS, LaShawn, Kahlil and PeeWee, are out-of-control. LaShawn is a “smack me, and I’ll smack you back,” pony-tailed sister. Kahlil sets off an alarm, causing everyone to panic. PeeWee is a dirty-diapered toddler, weaned on cigarettes and MAD magazine. When Kahlil unplugs a ride, a robot-skeleton brings the foursome before a jury. Abe Lincoln presides over the trial as Nixon shows a videotape of the calamity BEBE’S KIDS caused at FUNWORLD. With music and dance, the children plead their case, insisting that “every great leader broke the rules” and that what they really need is freedom.

Although BEBE’S KIDS is presented as a witty African-American cartoon, it is more disturbing than entertaining. There is nothing funny about children who wreck havoc, speak disrespectfully and aren’t disciplined. Ironically, the movie suggests that quality time and paying more attention to children helps resolve such behavior problems without proper attention to their need for discipline. Other distorted values surface with racist and stereotypical remarks.