"Give Faith a Chance" 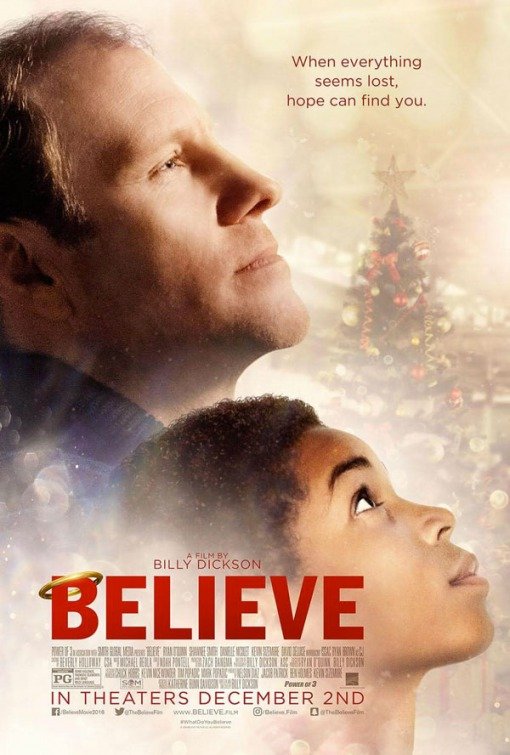 BELIEVE is an entertaining Christmas movie. Matthew Peyton’s family has produced the Christmas pageant on for years, brining the community a lot of joy. However, when his business suffers, he doesn’t think he can pay for the pageant. The community is outraged, and some of Michael’s workers beat him up for losing their jobs. A poor young boy and his mother take in Matthew to help him recover. In them, Matthew sees true Christian faith in action. Will he still be able to do the pageant although he’s lost almost everything?

Despite some unnecessary flashbacks, BELIEVE has a good, uplifting story with some professional acting. It has a strong Christian, moral worldview that promotes faith, prayer and sacrifice. The protagonist has to lose everything in order to humble himself and ask God for help. The young boy in the movie has great faith, but sometimes his faith seems like it’s promoting a type of Gnostic Gospel. Overall, however, BELIEVE is an entertaining holiday movie for the family to celebrate the Christmas season. Hollywood should be making more uplifting Christmas movies like BELIEVE.

(CC, BBB, Cap, FR, V, A, M) Strong Christian, biblical, moral, capitalist worldview includes Bible verses, prayer, sacrifice, doing the right thing is extolled, and an emphasis on having faith, with some prosperity Gospel; no foul language; a man is pushed and punched by a group of men who also light his car on fire, fire, woman pushed down stairs, man runs into a fire to save a boy; no sexual content; no nudity; light drinking done by the villains; no smoking nor drug use; and, villains lie.

BELIEVE is a Christian drama about a businessman who may have to shut down his business and stop supporting the annual Christmas pageant in his town. BELIEVE has a strong Christian worldview and is a good family movie for celebrating the Christmas holiday.

Matthew Peyton’s family has put on the Christmas pageant for years, bringing the community a lot of joy. Regrettably, Matthew’s accountant comes in to tell him the books are in the red. Also, the union says the men won’t work for less pay. Matthew decides to shut the doors for a few days and go to the city court to tell them he may not be able to provide for the Christmas pageant. The entire town gets down on Matthew. They think he doesn’t want to sell the rights to the pageant because it would break his trust fund. Peyton feels he has no friends except his friend, Nancy, whom he has known since he was young.

Some of the men from his company, who are out of work beat up Matthew, but a homeless young boy named Clarence finds him, saves him and brings him to the warehouse where he and his mother, Sharon, live. When Matthew wakes up, he sees Clarence’s beautiful mother Sharon taking care of him. Sharon is without a job, but is studying to be a nurse, while Clarence’s dreams are to be in the Christmas Pageant as the Angel Joseph. Matthew sees that Clarence and Sharon have a lot of faith even though they have nothing.

Will Matthew still be able to do the pageant although he’s lost almost everything?

BELIEVE is an entertaining movie. It does have some plot issues, including unnecessary flashbacks. The movie generally has good acting, however, including the young Clarence, played by Isaac Ryan Brown, who does a great job.

BELIEVE has a strong Christian worldview, stressing the power of faith in the midst of adversity. The lead character has to lose everything in order to humble himself and ask God for help. The young boy in the movie has great faith. However, the movie sometimes seems like it’s supporting a Gnostic prosperity Gospel, of believing something you want and then making it happen. Overall, however, BELIEVE has a wonderful message of trusting in God and doing the right thing.

BELIEVE is an entertaining family movie to enjoy during the Christmas Holiday. Hollywood should be offering more positive Christmas movies like this.