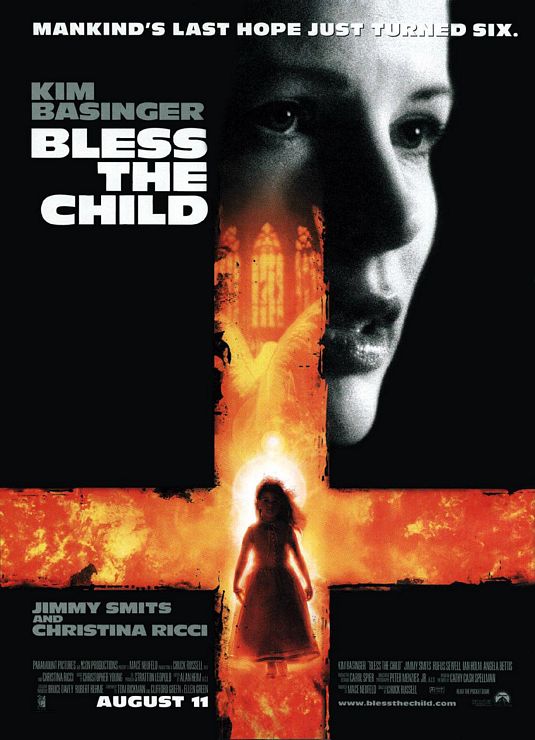 Produced by many Hollywood friends, BLESS THE CHILD opens as a Christmas star appears and Maggie (played by Kim Basinger) is told that a special child will be born. Her drug addict sister abandons her baby Cody to Maggie. As the years progress, it becomes clear that Cody is special. Eventually, children born on the same day as Cody are killed in a slaughter of the innocents. FBI agent John Travis discovers that Satanists, calling themselves New Dawn and led by Eric Stark, are trying to find Cody. Stark either must convert Cody to the devil, or sacrifice her. In the spiritual battle, demons appear, vermin attack and violence occurs.

BLESS THE CHILD is a blatant Christian allegory with a few Catholic trappings. The movie testifies that Jesus is God incarnate. Although there is no sex nor nudity in BLESS THE CHILD, the intense violence is compounded because it involves a young child. Therefore, this is not a movie for children. The production values of the movie are good, and the special effects are terrific. BLESS THE CHILD has brought Christian allegory to the big screen and deserves the enthusiastic support of the Christian community

BLESS THE CHILD brings together the talents of many of our Hollywood friends, including those who consistently come to Movieguide’s ® Annual Awards Gala and Report to the Entertainment Industry. Thus, it is no surprise that they have brought popular Christian fiction to the big screen with BLESS THE CHILD. In fact, the movie plays like many of the Christian novels we’ve reviewed over the past years.

The story starts out during the Christmas season. A Christmas star has appeared which has not been seen since the birth of Jesus. Our heroine, Maggie O’Connor (played by Kim Basinger of I DREAMED OF AFRICA and LA CONFIDENTIAL), is told by a woman on the subway that a special child will be born. Thus, the theme that God is ordaining a child in our present times to witness to Him is revealed. This Christological allegory never diminishes the uniqueness of Jesus, however, and it is clear throughout the movie that Jesus is honored as God incarnate.

When Maggie gets back to her apartment, her sister, Jenna, is there, who has just had a baby out of wedlock. She abandons her baby Cody to the care of Maggie, but the question is whether Jenna’s drug use has caused Cody to be born autistic. Maggie sees beyond the signs of autism to realize that Cody is special. Therefore, she puts Cody into a special Roman Catholic school for children with learning difficulties. As the years progress, it is clear that Cody is special and even has the power to bring a bird back to life.

Meanwhile, children born on the same day as Cody are being killed in a 21st century replay of Herod’s slaughter of the innocents. FBI special agent John Travis (played by Jimmy Smits of TV’s NYPD BLUE and MI FAMILIA) is brought on board to investigate these deaths. From the symbols burned into the arms of the dead children, Travis recognizes that these are Satanists at work. Eventually, it becomes clear that the Satanists are trying to find the miracle child, and that child is Cody. Maggie discovers that the Satanists operate under a group called New Dawn, led by a man named Eric Stark. To get to Cody, Stark marries Maggie’s sister, Jenna, and then all hell breaks loose. Stark either must convert Cody to be a tool of the devil, or sacrifice her to the devil. Maggie and Travis must rescue Cody, and it is prophesied that Cody will lead many people to God. In the process of the spiritual battle, demons appear, vermin attack and gruesome violence occurs.

BLESS THE CHILD is blatantly Christian. The movie mentions Jesus throughout the story. There are a few Roman Catholic trappings, however, including prayers in front of a statue of Mary. One of the disputes in the production of THIS PRESENCE DARKNESS was the studios’ desire to turn the pastor into a priest. Clearly, Hollywood prefers those who wear their religious symbols so they can be clearly identified. Even so, the beauty of this film is evident in its emphasis on the child being used by God, and there are some moving scenes where Christ’s love is displayed.

Although there is no sex or nudity in BLESS THE CHILD, the violence is very intense at times, and is even more intense since it involves a young child. Therefore, although many Christians will love this movie and will be urged to support it in spite of its R-rating, it is not a movie for children under 13 years-old.

The acting and production values of the movie are good. BLESS THE CHILD hearkens back to the horror movies of old. The plot is pretty straightforward and has an almost comic book quality at times. The special effects, on the other hand, are terrific, and the demons seem real.

BLESS THE CHILD has broken through a major barrier. It has brought sincere, Christian allegory to the big screen. It has done so with a good budget and a good cast and crew. BLESS THE CHILD deserves the enthusiastic support of the Christian community.