"A Murky World for Murky Times" 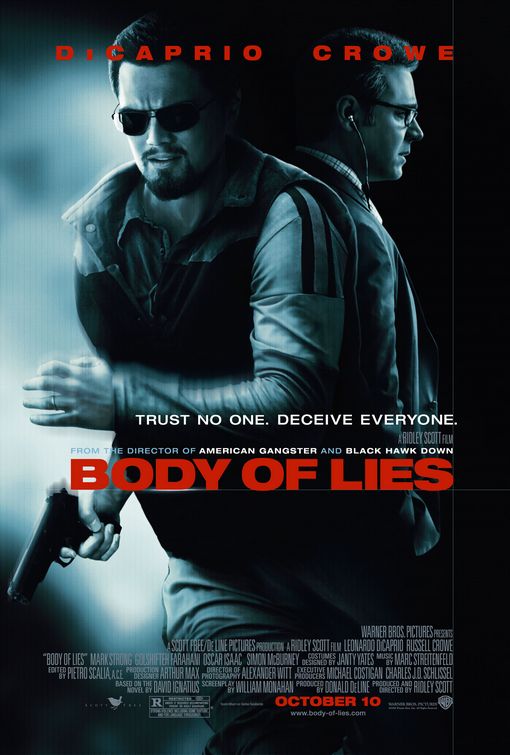 BODY OF LIES stars Leonardo DiCaprio and Russell Crowe in a spy thriller involving a CIA operative and his boss fighting Muslim terrorists. A dead informant leads CIA undercover man Roger Ferris to a possible safehouse in Amman, Jordan of a notorious terrorist leader. Roger’s older boss in the states, Ed Hoffman, orders him to work with Jordan’s suave, charismatic espionage leader. Hoffman, however, clashes with the Arab. This eventually puts Roger’s life in even more incredible danger.

This movie’s premise is a bit fuzzy at first, so it’s hard to identify with the main characters and their goals. Once the story’s direction is established, it may be too late for moviegoers to invest all their hearts and minds into the plot and the characters. BODY OF LIES is still entertaining and never boring. It has excellent performances. Ultimately, the movie reveals itself to be more like the murky spy thrillers in the 1960s that tried to present a more realistic take on the espionage game. The belated beginning and murky morality are not entirely satisfying or believable. There is lots of strong foul language and some very strong violence.

(B, PC, FR, LLL, VVV, N, A, D, M) Light but somewhat murky and unsatisfying moral worldview with some positive references to God but also some light political correctness, plus Muslim characters are involved in the story but the movie neither promotes nor rejects Islamic theology, though man argues about what the Koran actually says about violence against non-Muslims with another man in one scene; at least 65 obscenities and 10 strong profanities; some very strong violence includes two fingers smashed with a hammer to the point of being cut off, torture, a planned beheading that’s not completed, and a man is punished by being whipped on his naked rear end, plus plenty of action violence such as explosions, bombs, rocket propelled grenades, gunfights, chases through streets, threats of torture, fighting; no sexual content; brief upper and rear male nudity; alcohol use; smoking; and, lying, deceit, kidnapping, terrorism rebuked, and movie flirts with anti-American content but never quite gets there.

BODY OF LIES is a spy thriller from Ridley Scott starring Leonardo DiCaprio and Russell Crowe. The movie’s premise is a bit fuzzy in the first act, so it’s hard to identify with the main characters and their goals. Once the direction of the story is cleared up, it may be too late for moviegoers to invest their hearts and minds into the plot and characters. The movie is never boring or uninteresting, however.

After a brief setup about terrorist in England, the movie opens in Iraq. Roger Ferris, an American CIA agent played by Leonardo DiCaprio, is working undercover getting intel on Muslim terrorists so the military can blow them to kingdom come. Back in the states, Roger’s boss, Ed Hoffman, played by Russell Crowe, orders Roger not to bring a terrorist turned informant back to the U.S. Though the man now wants out of the terrorist ranks because he doesn’t want to be a suicide bomber, Hoffman figures that the man doesn’t deserve asylum because he decided to be a terrorist in the first place. Hoffman’s decision brings certain death to the informant, which Hoffman doesn’t mind because that may lead Roger to the man’s former terrorist buddies. This calculating decision angers Roger, who’s sympathetic to the man’s plight and feels the man deserves a reward.

The informant’s inevitable death leads Roger to the camp of a terrorist cell run by a ruthless Muslim Jihadist named Al-Saleem. Barely escaping with his life, Roger picks up information from the camp that Al-Saleem may have a safe house in Amman, Jordan.

Hoffman orders Roger to Amman to get the cooperation of Jordan’s head of intelligence, a charismatic fellow named Hani Salaam. “Never lie to me,” Hani tells Roger.

Roger’s boss, however, is running another, related operation in Jordan, without telling Roger. Eventually, Hoffman’s shenanigans result in Hani kicking Roger out of the country.

Though incredibly upset about this turn of events, Roger creates a plan to bring Al-Saleem out of his hiding hole. The plan backfires, however, endangering Roger’s life. His boss’s way of conducting business makes things worse.

Once it gets going, BODY OF LIES reveals itself to be like a modern-day version of those murky spy movies from the 1960s that tried to present a more realistic take on the espionage game. In those movies, the protagonist can’t trust anyone, not even his boss or the people with whom he works who are supposed to be on his side. The first act also gives a few minor indications that the movie may be just another Hollywood attack on America’s war against evil Muslim terrorists, but this turns out not to be the case. Even so, the movie has a light politically correct attitude about the War on Terror that dilutes any gung-ho, pro-American, rah-rah notions inherent in this plot, where Muslim terrorists are indeed a source of ruthless cruelty and evil. As Hoffman tells Roger a couple times, there are no completely innocent people in their line of work. Sadly, the result of all this is that, while it’s entertaining and never boring, BODY OF LIES doesn’t live up to the four-star quality movie it could have been. The belated beginning and murky morality are not entirely satisfying or believable. The movie also lacks that certain something, that spark of brilliance that makes a great spy thriller stick in one’s memory. The performances are excellent, however.