"Confession and Repentance Are Good for the Soul" 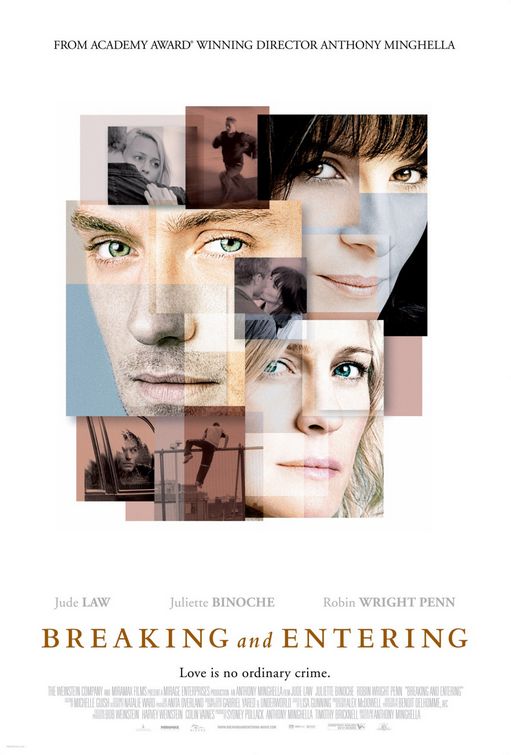 BREAKING AND ENTERING stars Jude Law as Will, an upper-class architect working on a major project to gentrify a waterfront area in London. Because of his new project, Will spends less time at home with his beautiful, melancholy girlfriend, Liv (played by Robin Penn Wright), and her troubled 13-year-old daughter. A gang of thieves from Bosnia uses a teenager, Miro, to break into Will's offices and steal equipment. During another attempted break-in, Will follows Miro back to the apartment Miro shares with his widowed mother, a pretty seamstress named Amira (played by Juliette Binoche). Will decides to find out what's happening by taking some tailoring to Amira. His relationship with Liv already in crisis, Will falls easily in lust with Amira, who is pleased to have another man in her life.

The protagonist in BREAKING AND ENTERING discovers he must publicly repent, confess and seek forgiveness in order to find true happiness. Thus, the movie's ending suggests that Christian values are the best way to solve one's personal problems. Until the positive ending, however, viewers of BREAKING AND ENTERING are confronted with scenes of immorality, including, sex, nudity and foul language.

(Pa, C, B, PC, FR, LLL, V, SS, NN, A, D, MM) Mixed pagan worldview with light Christian and moral elements, wherein man guilty of cheating on his long-term, live-in girlfriend eventually does the right thing, repents, publicly confesses, and decides to make a permanent relationship with girlfriend and also helps a troubled teenager turn his life around in the process, with the attendant moral strife that comes with such pagan problems and conflicts, plus some politically correct aspects that seem to favor multiculturalism (but nothing stridently in-your-face) and some statements promote moral relativism, including a false antinomian attitude toward crime among the poor and lower working class, and woman attends quiet, moderate Muslim services of some kind but no overt Islamic content occurs; about 19 obscenities, four strong profanities and six light profanities; light violence such as boy breaks glass and board to break into office twice, girl slips and falls on some pipes at construction site, police nab boy, man chases thief who jumps along roofs, and woman falls down; strong sexual content includes unmarried couple passionately fools around in bed, implied oral sex, unmarried couple lives together, man cheats on his live-in girlfriend with another woman, and prostitute is a minor character and is seen coming from behind a building followed by a man zipping up his pants; brief upper female nudity, rear nudity, and upper male nudity; alcohol use; smoking; and, lying, cheating, burglaries, man establishes a weird friendship with prostitute not for sex but to talk with, and man saves boy from juvenile prison.

BREAKING AND ENTERING is an adult drama about family, infidelity and cultural conflict. Though set in a confused, post-Christian secular world, it becomes clear as the story progresses that basic Christian values can help solve the problems in today’s pagan environment.

Jude Law stars in BREAKING AND ENTERING as Will, an upper-class architect working on a major project to gentrify a waterfront area in London. Because of his new project, Will spends less and less time at home with his beautiful, melancholy girlfriend, Live, and her troubled 13-year-old daughter, Bea.

A gang of thieves from Bosnia uses a young teenager, Miro, to twice break into Will’s offices and steal computers and fancy monitors. During another attempted break-in, Will follows Miro back to the apartment he shares with his widowed mother, a pretty seamstress named Amira. Will decides to find out what’s going on by taking some work to Amira. With his relationship with Liv already in crisis, Will falls easily in lust with Amira, who is pleased to have another man in her life.

Things fall apart, however, when Amira discovers that her son has been burglarizing Will’s office and Will knows who they are.

BREAKING AND ENTERING is a slow, but captivating, drama about the clash of cultures in today’s London. It also turns out to be a rather poignant melodrama about infidelity, family conflicts and setting things right. The movie’s ending suggests that Christian values like repentance, confession, forgiveness, and compassion are the best way to solve one’s personal problems. If this positive message was made even more explicit and the movie’s explicit foul language, sex and nudity eliminated, BREAKING AND ENTERING might have been a MOVIEGUIDE® award winner this year.

The acting in BREAKING AND ENTERING is quiet and realistic, but brilliant. Jude Law as Will, Robin Penn Wright as Liv, and Juliette Binoche as Amira each give one of their best performances. Also, newcomer Rafi Gavron is a real find as Amira’s son Miro.

As usual, director Anthony Minghella is a little too measured in his directing efforts, but this is one of his more engaging as well as uplifting movies. Here, he also adds his typical message that people from other cultures must get beyond their differences in order to improve their lives. There should be no boundaries between us, Minghella often seems to be saying. Thus, BREAKING AND ENTERTING contains Minghella’s typical politically correct multiculturalism. Here, however, it is not strident or offensive, but ultimately uplifting. Again, it is the movie’s unstated Christian values, not some politically correct ideology, that bring this story to its positive conclusion.

Of course, a committed faith in Jesus Christ is the only way to find a truly righteous path that overcomes sin and brings true happiness and joy. It also will help you solve the kind of problems that the characters in this movie confront.