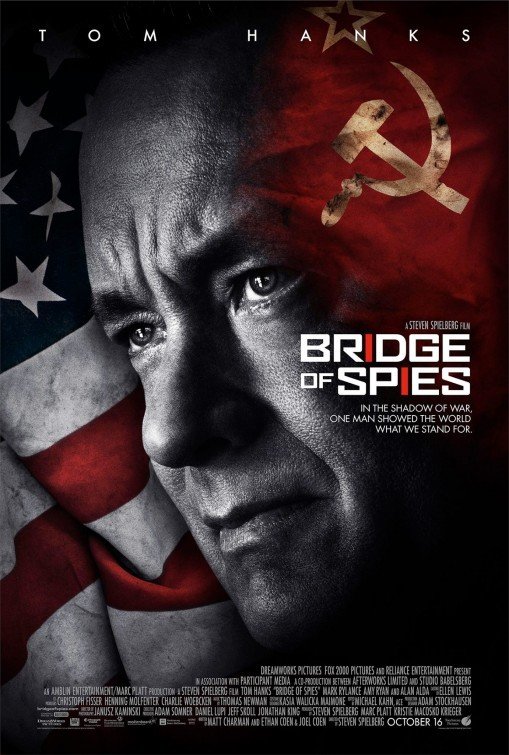 BRIDGE OF SPIES is Steven Spielberg’s take on the Cold War. In the late 1950s, an American insurance lawyer named John Donovan is asked to defend a Soviet spy, Rudolf Abel, to make it seem as if the man got a fair trial. The judge is biased from the beginning, but Abel escapes the death penalty because Donovan argues maybe there will come a time when the USA can exchange Abel for a captured American spy. Sure enough, in 1962, the CIA sends Donovan to East Berlin to negotiate an exchange of Abel for Gary Powers, the captured American U2 pilot. Can Donovan’s skills as a negotiator close the deal? BRIDGE OF SPIES is suspenseful, but the first half is a clunky. That said, Tom Hanks delivers another appealing performance. The movie has a Christian, moral worldview with some brief anti-communist content. However, its view of the Soviet spy is too positive and its view of the American justice system too negative. Also, the Christian, moral worldview could be stronger. BRIDGE OF SPIES contains some gratuitous foul language. Extreme caution is advised.

(C, B, AC, Ro, PCPC, RH, LL, V, A, D, M) Light Christian worldview with some moral elements and some anti-communist content, in a real-life story about America and the Soviet Union exchanging two spies in 1962, but marred by Romantic, liberal, politically correct content (the Soviet spy is depicted in a positive fashion throughout and is described as “just doing his job,” which is an obnoxious description) with revisionist history, but hidden to make it rather unnoticeable; 13 obscenities and four strong profanities; a scene of about four people being shot by communist guards in East Berlin during Cold War (two seem to be helping two others escape over the Berlin Wall), people arrested, prisoner deprived of sleep and interrogated, unknown shooter fires gun into family’s house, newsreel footage of atomic bombs during classroom presentation, and a scene with a plane being shot down with the pilot gasping for life before he frees himself and opens his parachute; no sex; no nudity; alcohol use; smoking; and, some miscellaneous immorality such as judge is biased against defendant before any evidence is heard and classroom newsreel of atomic bomb exploding scares a little girl with tears in her eyes.

BRIDGE OF SPIES is Steven Spielberg’s liberal take on the Cold War, with a real-life tale about a gutsy, liberal American lawyer trying to organize the swap of a Russian communist spy for a downed American pilot in 1962 East Berlin. Despite some brief Christian, anti-communist content, BRIDGE OF SPIES depicts the Russian spy as courageous and loyal, and the American justice system as deeply flawed. There’s even a nod in favor of illegal immigrants, if you can believe it!

The movie opens with the FBI tailing and capturing a deep cover Soviet spy with the name Rudolf Abel. A quiet man who likes to paint, Rudolf is shown cleverly hiding a small secret, invisible message on a gum wrapper by rubbing the message off with the paint on his palette. The gum wrapper was hidden in a small coin, a nickel, that can easily be taken apart. Cut to insurance lawyer John B. Donovan, played by Tom Hanks. Donovan is asked to defend Abel so that it will look like Abel’s getting a fair trial. Donovan defends Abel to the best of his ability, but the judge is clearly biased, and Abel is railroaded, though viewers know he’s clearly guilty.

Despite Abel’s conviction, Donovan goes to the judge’s home and convinces the judge not to give Abel the death penalty for espionage. The judge is moved by Donovan’s argument that, some day, the Soviets might capture an American spy, but if Abel is executed, American officials will be unable to offer a spy exchange with the Russian Soviets. Sure enough, an American pilot, Francis Gary Powers, is shot down over Russia while flying a high-altitude spy plane known as the U2. The CIA engages Donovan to go to East Berlin and negotiate an exchange of Powers for Abel. Donovan must use al his skills as a negotiator to get the job done.

BRIDGE OF SPIES has some good moments, but the first half is a bit bifurcated. Thus, it switches from the story of Donovan defending the Soviet spy to the story of the CIA hiring and training Lt. Gary Powers and several other pilots for the secret U2 missions of taking high-altitude photos over Russia and Eastern Europe. As a result, the movie’s second half is more engrossing than the first half. In fact, at least one viewer at the screening MOVIEGUIDE® attended nodded off in the middle of the movie.

BRIDGE OF SPIES has a Christian, moral worldview that, especially in the movie’s second half, shows the evils of Soviet-style communism in East Germany. In fact, Donovan’s negotiation for Gary Powers’ release takes place right after the Russians and their communist allies in East Germany erect the Berlin Wall that stops East Germans from leaving the communist tyranny of the East for the freedom of the West. Several excellent scenes, and especially one scene in the third act, show the real evils and true brutality of communist tyranny.

That said, the movie depicts the Soviet spy caught in New York as a loyal, courageous man who faces imprisonment and potential death with stoic acceptance. At a couple points, the movie even argues that the man was “just doing his job.” Yeah, right! Like the Nazi stormtroopers and spies who helped Hitler murder six million Jews? In contrast to its depiction of the Soviet spy Rudolf Abel, BRIDGE OF SPIES depicts the American justice system as thoroughly unjust. Contrary to what Donovan was told when he took the job handling Abel’s defense, the judge handling Abel’s trial has no interest in giving Abel a fair trial. He wants a conviction of this “godless communist” as swiftly as possible. In this way, the movie sets up a kind of “moral equivalency” between the communist system of jurisprudence and that of the Soviet Union’s. The only thing that dilutes this clearly liberal take in the movie is the fact that Spielberg clearly shows the viewers that Abel, who was really a colonel in the KGB, was indeed guilty of espionage.

That said, the judge in the movie is biased against Abel BEFORE he’s heard ANY of the evidence! The other problem with BRIDGE OF SPIES is that, although the movie’s beginning shows the American lawyer praying to Jesus Christ with his family, the rest of the movie doesn’t develop this Pro-Christian theme. The prayer only sets the stage for the lawyer’s character, showing him to be a fine upstanding example of a virtuous Christian who treats everyone with kindness and respect. This is definitely positive but it would have been nice if the movie had shown another example or two of the lawyer’s Christian faith. Consequently, the Christian, moral worldview in BRIDGE OF SPIES is not as strong as it could have been. BRIDGE OF SPIES also contains some foul language, including two gratuitous “f” words: one is said by a CIA agent; and, Tom Hanks repeats it back to him during an argument. It’s possible such characters might have used such language back in 1962, if only briefly. Ultimately, the liberal conventions in BRIDGE OF SPIES seem more annoying than truly abhorrent. Tom Hanks turns in another fine, appealing performance. Also, the period detail is excellent. MOVIEGUIDE® just wishes the movie was cleaner, language wise, and a little less politically correct. We could find no evidence that Rudolf Abel’s trial was so unfair. In fact, a former colleague of Rudolf’s testified against him at his trial. Also, because of this man’s testimony, the FBI already knew of the coin message trick. Abel’s case is actually known as the “Hollow Nickel Case.”