"A Misguided Mindset of Marriage" 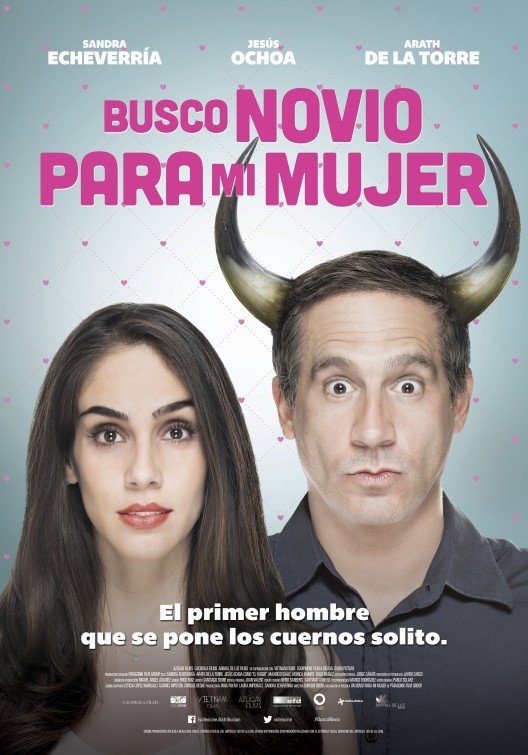 In the Mexican comedy BUSCO NOVIO PARA MI MUJER, Paco is tired of his wife, Dana, complaining all the time. It's creating a divide in their marriage where neither one is happy anymore. Paco decides he wants a divorce. The problem is that he’s too afraid to tell Dana. Paco’s friends suggest he hire an professional seducer of women, The Tiger. Paco does so hoping the Tiger will take her off his hands and make the divorce process easier. However, Paco soon regrets his decision after seeing them together. He hopes it's not too late to head the Tiger off and save their marriage.

The story moves along fairly well until towards the end when the crisis point is reached. That is where it hits a snag and things suddenly enter the picture that have no precedent in the previous hour of the movie. Sadly, the entire plot revolves around an unbiblical view of marriage. Not only is divorce condoned, but cheating as well. There is some foul language and sexual references. Extreme caution is advised for BUSCO NOVIO PARA MI MUJER.

(PaPa, C, B, LL, V, SS, N, A, D, MM) String pagan worldview where the story revolves around an unbiblical view of marriage where divorce and cheating are condoned, but a husband and wife about to get divorced decide to forgive each other and stay married; 12 obscenities and profanities, a woman is depicted urinating in front of her husband in the bathroom, a man is heard defecating in a bathroom stall; it's implied that a man is punched in the face when he shows up with a black eye, a woman sprays hairspray in a man's face; strong sexual content and immorality includes a man rattles off a list of sexual positions and fetishes, woman sings a song which includes lyrics that refer to sex, a man grabs and adjusts his private area, one scene has a brief mention of “getting laid,” a man decides to hire another man to cheat with his wife, wife decides to cheat on her husband by kissing another man, a man accepts jobs which involve seducing women, and a group of men discusses the sexual exploits of an infamous seducer of women; natural other male nudity in a spa, a woman's nude back is shown in the shower; one scene shows a couple sipping on wine, a party scene shows people casually drinking alcohol; several scenes depict characters smoking; and, man decides he wants to get a divorce and is encouraged by his friends, a married couple lie to each other repeatedly.

In the Mexican comedy BUSCO NOVIO PARA MI MUJER, a husband is afraid to tell his wife that he wants a divorce, so he hires another man to seduce her. This Spanish romantic comedy comes across as only mediocre while its moral values are often upside down when it comes to the sanctity of marriage.

In BUSCO NOVIO PARA MI MUJER, a disturbing trend has developed in the relatively young marriage of Paco and Dana. Every morning Paco must listen to his wife complain about all her pet peeves in life while the smoke from her cigarette drifts into his face. Not only are her complaints expressed in the privacy of their breakfast table conversation, they also manifest themselves in the form of sarcastic jokes at dinner parties aimed at the others in attendance. After one such incident, Paco decides he’s had enough and wants a divorce. The only problem is, he’s afraid to tell Dana.

At the local soccer league where Paco plays goalie, his teammates motivate him to have the courage to break things off with his wife. That night Paco returns home with renewed determination only to chicken out. Again his teammates step in and suggest he get someone else to do the job for him. There is an infamous seducer of women, called Tiger, who’s never failed to win over the love of any woman he’s ever pursued. Paco figures it might be easier to break up their marriage and then mutually agree on divorce, so he meets with Tiger and the two come to an agreement.

Tiger requests all the information about Dana that Paco can provide, and then tells Paco to get Dana out of the house so he’ll have opportunities to meet her. Paco arranges for Dana to get a job at a small radio station, making up the excuse that having something to do will lift her out of the depression she’s experienced for some time. However, there’s a lot of truth to that excuse.

Dana’s new on-air show is an unexpected success, and Tiger ramps up his efforts to win her affection. This does wonders for Dana’s personality, and she becomes more like the old Dana Paco fell in love with in the first place.

Curious as to how his plan is proceeding, Paco spies on Tiger and Dana. While nothing serious has happened between the two yet, Tiger instructs Paco to stay distant from his wife so he can do his job. Paco is forced to spurn his wife’s romantic advances even though he wants to submit to them. Dana interprets this as him not wanting her. Paco soon realizes he doesn’t want a divorce after all, but as things quickly spiral out of control, he’s afraid it may be too late.

The story in BUSCO NOVIO PARA MI MUJER moves along fairly well until towards the end when the crisis point is reached. That is where it hits a snag and things suddenly enter the picture which have no precedent in the previous hour of the movie. After a couple of somewhat confusing scenes, everything goes back to normal. At least the ending is a little unpredictable, leaving the outcome up to the very last second. Despite the negatives, the movie does live up to its genre. The movie some good laughs.

Sadly, the entire plot revolves around an unbiblical view of marriage. Not only is divorce condoned, but cheating as well across the board. Only one minor character in the movie suggests that Paco should stay with his wife and work things out. This is offhandedly dismissed as a ludicrous idea in favor of the more sane option: divorce. The only silver-lining is that when it comes down to it, Paco is deeply disturbed seeing his wife with another man and decides that divorce isn’t the solution. Although no actual sex is shown on the screen, there are discussions of Tiger’s sexual exploits. Also, Tiger goes through a list with Paco of the sort of sexual situations Dana likes. There is also some foul language and lying. Extreme caution is advised for BUSCO NOVIO PARA MI MUJER.