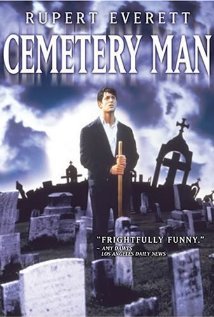 CEMATARY MAN is a disgusting, vile movie about a cemetery caretaker who buries the dead and shoots the zombies. He increasingly becomes despondent about his work, and his lack of true love, and eventually he becomes unhinged, sending more people to the cemetery. Loaded with sex, violence and perversion, it is a dark, offensive movie with no redeeming qualities.

CEMTARY MAN ranks as one of the foulest and most perverse movies of all time. It is about the eventual undoing of a cemetery caretaker who finds life meaningless while he buries the dead and shoots zombies. Francis DelMorte is a lonely man who wants to find love. One day, a beautiful woman shows up at the cemetery to mourn for her deceased husband. Francis is smitten by her, and soon, they are fornicating on the grave of her husband. Her husband comes back as a zombie and bites her. Francis thinks she dies and prepares her for burial. When she awakens from a coma, Francis thinks she is a zombie and shoots her in the head, which is the only way to stop zombies. When he realizes his mistake, he becomes unhinged, resulting in a shooting spree.

This movie is completely offensive and full of despair. One character in this movie says, “We are born to die.” That sums up the theme of CEMATARY MAN. It is ridiculous in its careless attitude towards the value of life. Most of the story only serves to set up situations where Francis can shoot zombies. Furthermore, the movie is almost pornographic in its sex scenes. The good news is that this is not a big budget production, and the movie will remain in small art house type theaters. The bad news is that CEMATARY MAN was made at all.