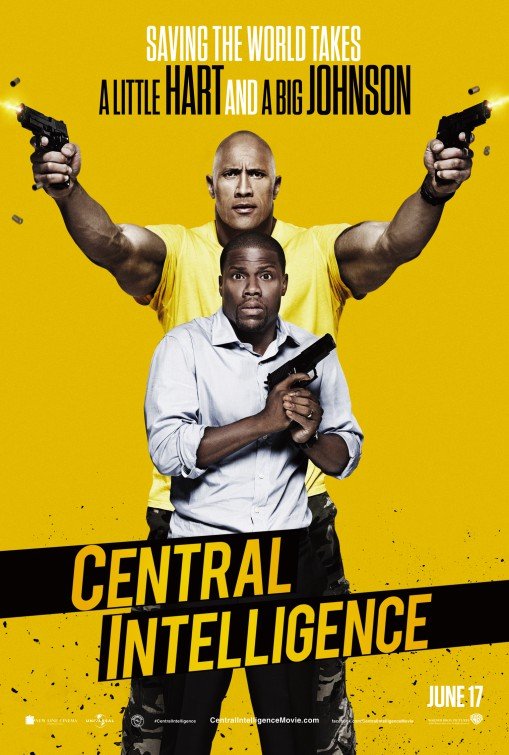 CENTRAL INTELLIGENCE is an action comedy. It opens with some high school bullies humiliating an overweight nerd, but the school’s best student literally covers up his humiliation. Twenty years later, the nerd, named Bud, shows up for their high school reunion. Bud is now a physically fit, musclebound CIA agent who gets Calvin to help him out of a jam. Thus begins a wild series of comical misadventures. The movie keeps viewers wondering, though, if Bud is a hero or has gone rogue, and if he’s going to wind up killing Calvin or liking him instead.

CENTRAL INTELLIGENCE does a great job mixing action with comedy. It also has some strong emotional moments where the characters express their disappointments but encourage each other to overcome. Dwayne Johnson and Kevin Hart truly shine as Bud and Calvin. CENTRAL INTELLIGENCE has a strong, mixed pagan worldview with a solid moral, redemptive premise stressing empathy, forgiveness, finding your inner hero, and fighting bullies. It’s mixed with some crude content, including lots of foul language, intense, often comical action violence, and brief lewd references and innuendoes.

(PaPa, B, C, PP, Ho, LLL, VV, N, A, M) Strong mixed pagan worldview with a solid moral, redemptive premise stressing empathy for others, finding your inner hero, bullies get their comeuppance, marriage and having a baby extolled after couple decides they need counseling to work on their marriage, plus some patriotic content and brief homosexual allusions played for comedy; at least 71 obscenities (including one “f” word and some “f” words bleeped out over the end credits), four strong profanities and 19 light profanities; strong comic violence (a couple scenes with blood) includes shootings, gunfights, explosions, punching, kicking, martial arts, car chases, character tears out someone’s throat, faked explosion with some blood that probably is fake), implied torture, bullying, man tasered, characters fall multiple stories and hand on a large inflated object after crashing through a window, comical slapping; some crude sexual comments and brief homosexual allusions meant for comedy; shots of rear male nudity played for laughs with a theme of bullying; alcohol; use; no smoking or drugs; and, deception and doublecrosses common to spy movies, villain is betraying his country, and now-grown bully pretends he became a born-again Christian and wants to apologize before laughing and saying the apology is a hoax, but it’s revealed the bully’s really a Scientologist, and the movie thus mocks that notorious cult.

CENTRAL INTELLIGENCE is the story of a high school winner and loser who switch directions in life and meet up at their 20-year high school reunion, where the former loser is now a CIA agent who drags his friend on a dangerous adventure. CENTRAL INTELLIGENCE has a strong mixed pagan worldview with a solid moral, redemptive premise mixed with some crude content, including lots of foul language, some intense, often comical action violence, and some lewd references and innuendoes.

Bud Stone (Dwayne Johnson) is a former high school loser who went from being a morbidly obese teenager with a horribly funny name to being a muscular CIA agent with a new identity. When Bud was a senior, five bullies teamed up on him while he danced and sang naked in a gym shower and dragged him into a gym packed with classmates before dumping him naked to be humiliated in front of everyone. The only student who wouldn’t laugh at him was the school’s star student, Calvin Joyner (Kevin Hart), who gave him his letterman’s jacket to cover his implied naked body and walk out with some dignity.

Twenty years later, now known as Bud and musclebound, the loser victim finds Calvin while in town for their reunion. Calvin has gone from star to average-joe accountant. Calvin now feels disappointed in his life, but Bud finds him on Facebook and asks him to meet for drinks the night before their high school reunion and to talk. Bud is soon inviting his way into staying overnight at Calvin’s house.

The next morning, Calvin is shocked to find three CIA agents at his door, looking for Bud. Bud disappears instantly, but quickly returns to drag Calvin into a crazy set of misadventures. Bud needs Calvin’s help to figure out who a secret villain, named The Black Badger, is in time to prevent him from selling a computer chip with government secrets on it in an online auction to enemy nations.

Bud needs Calvin’s accounting expertise to track down where the bank accounts of the bidders are located, find the winning bidder and arrest him. However, the three agents claim Bud went crazy and turned traitor. They tell Calvin Bud’s the one selling the secrets. They ask Calvin to report back to them if Bud contacts him. Within moments of Bud swooping back in to get him, Calvin becomes convinced Bud’s telling the truth. So, they go on the run from the Feds while hoping to arrest the auction winner and reclaim the files.

Even so, all the way till the end, CENTRAL INTELLIGENCE keeps viewers wondering if Bud is a hero or has gone rogue, and if he’s going to wind up killing Calvin or really liking him. It’s an impressive feat for a genre where writers are often lazy in their plot creation while rushing to have big laughs or big explosions happen repeatedly, ad infinitum.

Director Rawson Marshall Thurber does a great job mixing action with comedy in CENTRAL INTELLIGENCE. He also inserts some strong emotional moments where the characters express their disappointments in life but encourage each other to overcome. Dwayne Johnson and Kevin Hart far exceed their expected acting limitations to truly shine on every level.

Sadly, CENTRAL INTELLIGENCE has a strong, mixed pagan worldview, but with a solid moral, redemptive premise.

First, it stresses empathy for others and forgiveness. It also has a strong anti-bullying message, but makes the point that anyone can change their lives for the better and overcome adversity. In fact, a primary moral lesson is to be the hero of your own life. Finally, Calvin and his wife are unhappy with the way their lives have turned out, but they decide to get some marriage counseling and end up having a baby on the way.