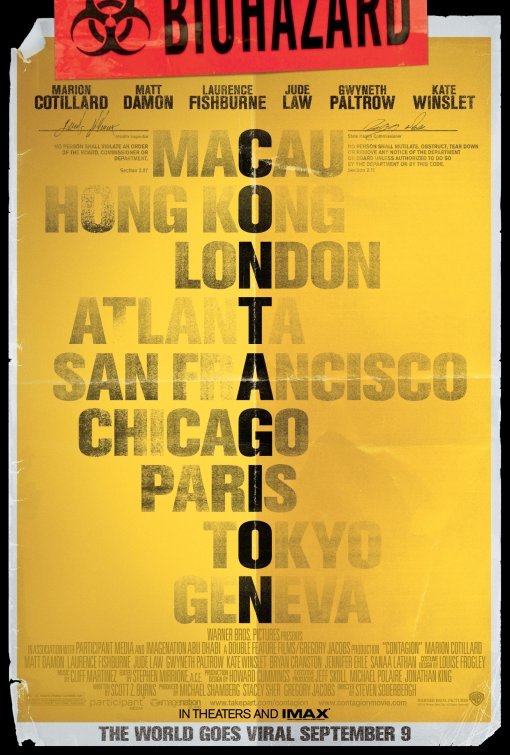 CONTAGION depicts an outbreak of a deadly virus that spreads at an extremely rapid rate. Around the world, top doctors take the challenge to stop it, including two American doctors. Homeland Security approaches one of the government doctors just in case the virus was a terrorist attack on the America. Meanwhile, the World Health Organization representative goes to China to find where the virus started and why. When the news media tells how contagious and horrible the virus is, people start to fight and kill each other for food, homeopathic vaccines and any means to save themselves. A private doctor finds a way to grow the virus, and the first step to finding the cure is made.

CONTAGION contains a few overt references to Jesus Christ and prayer. It also has very positive moral elements of doctors serving and saving people. However, it has a depressing theme. Also, the story doesn’t seem to have a clearly defined, dramatic beginning, middle and end. Along with its positive elements, the movie contains some foul language and violence. CONTAGION had a lot of potential but doesn’t live up to it.

(CC, BB, CapCap, LL, VV, S, A, D, M) Strong Christian worldview of serving one another and even laying down one’s life for one another with some positive prayers and overt references to Jesus Christ and images of churches and cross above Chinese school and women cries out to God, and some major moral points including father who will not let his teenage daughter kiss, father and daughter have a good relationship in which the daughter obeys her father and supports him, another father daughter relationship in which the daughter learns to serve because of her father being a good role model, doctors put themselves in harms way in order to find cures and save people, but diminished by adultery implied, although the adulterous suffers the wages of sin and health blogger is shown to be a manipulative, greedy provocateur while government is shown to not be as good as private enterprise for solving critical crisis issues although government is not shown as evil and tries to do the right thing and people are shown as flawed and sinful; five light obscenities, one “f” word, and five mostly exclamatory profanities; strong violence includes people shoving and pushing each other, implied man shooting and killing, autopsy showing women’s head being cut in half and peeled back; no sex scenes but implied adultery and young couple dances; no nudity; alcohol use; smoking and no illegal drugs, just medical drugs and homeopathic drugs; and, dysfunctional family portrayal with applied adultery and second marriages and man kidnaps women in order to save his village, and blackmail.

Attempting to be an action thriller, CONTAGION depicts an outbreak of a disease that spreads at an extremely rapid rate. Although the movie has some very positive moral, redemptive elements, it is marred because it has a very lackluster plot structure with no real climax, and so has the feel of a science lesson, with extremely slow moments and multiple characters.

The first cases of the disease start with Beth Emhoff, played by Gyneth Paltrow, who goes to Hong Kong on a work trip and decides to play at the Casinos for fun. Fun turns into catching a virus. Within five days, after returning home to her family, she has a seizure and dies. Giving the virus to both her young son and her husband, her son dies but her husband, Mitch, played by Matt Damon, becomes immune to it.

Around the world, the virus spreads rapidly and top doctors take the challenge to stop it, including characters Dr. Ellis Cheever and Dr. Erin Mears. Homeland Security approaches Dr. Cheever on the suspicions that the virus was a terrorist attack on the States. During this time, the World Health Organization (WHO) representative goes to Hong Kong to find where the start of the virus occurred and why.

The Center for Disease Control (CDC) tries to grow the virus in order to create a vaccine, but the CDC process is so slow and the virus is so contagious that it is killing millions of people while the CDC follows protocol. When this news of how contagious and horrible the virus is, people start to fight, shove and kill each other for food, homeopathic vaccines and any other means to have themselves. Against the orders of the government CDC, a private doctor finds a way to grow the virus, and the first step to finding the cure is made.

CONTAGION shows some people crying out to God and some biblical elements of doctors serving and saving, as well as clearly giving up their lives for others, but overall has a lackluster and somewhat depressing theme of death.

CONTAGION has good cinematography and great actors, but has a major problem: the script does not seem to have a beginning, middle and end, and the audience is left wondering what happened to certain characters in which the story never wrapped up. At times, CONTAGION feels like a science lesson and has long scenes of explanation and literal accounts of the virus and what the CDC does. At the same time, it has scenes fully focused on a text message conversation between a teenage girl and her boyfriend, which some thoughtful editing might have helped.

All and all, CONTAGION, had a lot of potential, but did not live up to it.