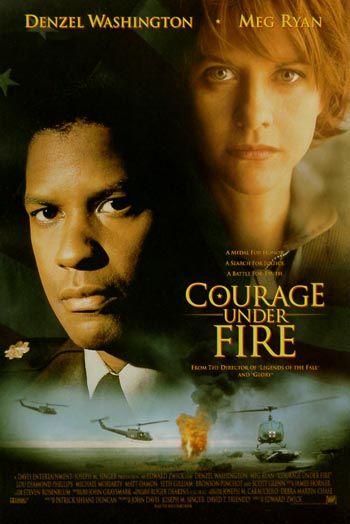 COURAGE UNDER FIRE represents the first film treatments about the Gulf War. Lt. Col. Nat Serling is ordered to investigate whether or not the deceased Captain Walden, a female helicopter commander, should be given a medal of honor for bravery during the war. Her performance is questioned by the members of her team, which leads Serling on a quest for the truth. Filled with horrible images of war and with too many profanities and obscenities, this is a movie about courage, truth and justice.

COURAGE UNDER FIRE is about friendly fire during the Gulf War. Denzel Washington plays Lt. Col. Nat Serling, who mistakenly shot and destroyed an American tank during the war. Guilt ridden, he is given an assignment by Gen. Hershberg to investigate if a medal of honor should be awarded to deceased, medevac helicopter pilot Captain Karen Walden. This medal would be the first for a woman in combat. Serling discovers that the captain’s character is questioned by members of her team. Eventually, Serling hears the whole story, involving a second episode of shameful friendly fire which reveals the medal-worthy courage of the Captain.

This movie is filled with gunfire, bombing, blood, burning, and excessive obscenities and profanity. Both Meg Ryan and Denzel Washington perform with cool precision. The movie might be seen as an endorsement for women in combat, but the real story is about a man who needs to find truth in order to set himself free. The real Truth, of course, is Jesus Christ, and the Lt. Col.’s healing may have been speeded by allowing himself to receive true grace. Yet, his search for goodness and truth seems to be guided by his faith-honed conscience. In its own way, the movie does parallel spiritual warfare and freedom in Christ.