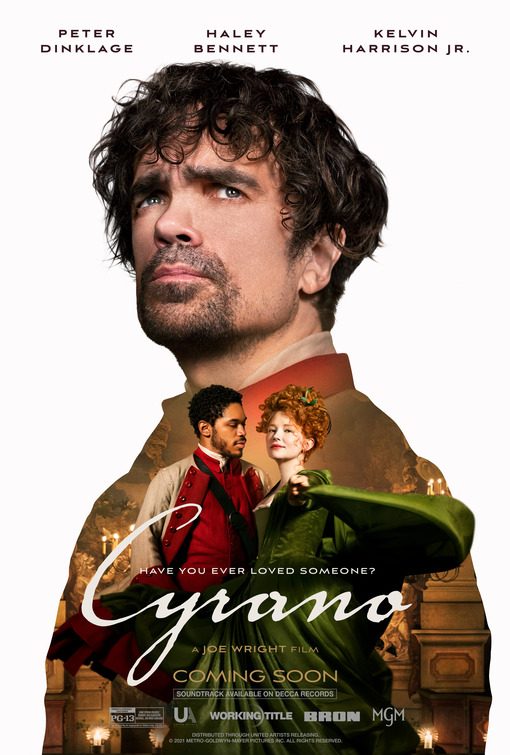 CYRANO (2021) is a musical drama based on the beloved French play by Edmond Rostand. In this version, instead of a long nose, Cyrano is a midget, and a talented poet and swordsman. His friend, Roxanne, falls in love with Christian, a soldier who serves with Cyrano in the army. Christian asks Cyrano to write the love letters for him. However, Cyrano is in love with Roxanne himself, because they both love fine poetry and prose. Meanwhile, a self-centered duke puts Cyrano and Christian in harm’s way because he also lusts after Roxanne.

The direction of CYRANO is so good that the politically correct casting becomes an asset rather than a detriment. The dialogue and interactions between the characters are excellent. Every major character references God. Faith, salvation and conversion refute romantic attractions based purely on looks. The movie has some intense moments, but they are portrayed with such grace that they never go over the top. The songs are so integral to the characters that it’s easy to forget it’s a musical. Overall, CYRANO (2021) is an extraordinary movie. We advise caution for young children.

(CCC, BB, L, VV, S, A, M)
Dominant Worldview and Other Worldview Content/Elements:
Ultimately a story of forgiveness and the realization that pride goes before the fall with a lot of Christian references, settings, prayers, and including the last scene in a convent where a nun is trying to convert Cyrano, a duke is very self-centered and wants Roxanne, a Romantic love based on images is refuted in the end
Foul Language:
A very clear OMG with some references that may be positive or may be derogatory about faith, but very little objectionable language
Violence:
Action violence without much blood, cruelty or malice, including swordfights, and a battle scene between the French and the Spanish, which ends up with several people being killed, but not excessive visualization of the violence, fighting off of people sent to kill him Cyrano throws a couple off the roof after they try to hang him and wins swordfights with others, defeating 10 assassins, Cyrano battles a count who is very effete and
Sex:
Some references to sexual activity such as the a man tells a woman he will take her physically whether she agrees or not, Roxanne exhibits desire on reading Christian’s notes to her which were actually written by Cyrano, an some kissing, but no excessive sex
Nudity:
No nudity
Alcohol Use:
References to alcohol and to stronger drink but nothing shown
Smoking and/or Drug Use and Abuse:
Cyrano asks at one point what “have you been smoking"; and,
Miscellaneous Immorality:
Deception but eventually revealed, bullying, lying, and one statement about rejecting the Gospel, which is eventually refuted when Cyrano admits it was his pride.

From the press materials and trailer, one would think CYRANO (2021)is a conscious attempt at presenting diversity, especially since the hero is no longer plagued by a long nose but is a midget and admits it in the movie, and since a couple of the key figures are African, which probably would not have been the case at that time in French history. Aside from this window dressing of diversity, the movie is an incredible, profound insight into the lure of romance versus true love and redemption. It could be summarized with the premise that great love overcomes pride and romantic notions.

Based on a musical theatrical production of the famous French play, the movie opens with tremendous sets representing the period including several puppets hanging in the closet of Roxanne (the puppets telling the viewer this is theatrical), who soon sings a story that she wants someone serious who loves her for better or for worse. Her attendant reminds her she must go to the opera with the Duke, who’s the most powerful man in France. Roxanne says she’s only going because she wants to see the opera and can’t afford the tickets. Her lady in waiting says she should marry the Duke because children want to follow their hearts, but, when you get older, you need to find someone who can provide for you. Children can think about love, but adults need to think about wisdom and sacrifice.

In the coach to the opera, the Duke is clear that he wants Roxanne. The Duke’s friend, the Count, replies to the Duke’s comment that Roxanne has not worn the dress he gave her with, “I tried it

Meanwhile, Cyrano, who’s a midget, in one of the wittiest displays in dialogue in a long time, brings the opera to a halt by accusing the famous actor of being a fop and of defaming the art of the theater. The Count jumps onto the stage and challenges Cyrano to a duel, saying he’ll make quick work of this “midget.” Cyrano, ever the brilliant wit, accuses the Count of being incapable of coming up with good verbal attacks. Eventually, the Count gets killed, and so the Duke plots Cyrano’s death.

Roxanne sends a confidential message to Cyrano to meet her in a private place after morning Catholic mass, but that night before, the Duke sends 10 men to kill Cyrano. Of course, Cyrano dispenses with all of them.

The next day, in another brilliant piece of dialogue, Roxanne describes that she’s in love with someone at the play the night before. Cyrano assumes it’s him until she says she never saw the man before and that his name is Christian. Christian is going into the army to be a member of Cyrano’s unit. Roxanne asks Cyrano to take care of Christian. Cyrano is devastated but will do anything for Roxanne.

When Cyrano meets Christian, Christian tells him he’s in love with Roxanne, but is incapable of expressing himself. So, Christian recruits Cyrano to write letters to Roxanne for him.

This deceit is almost exposed several times. The Duke hates both for interfering with his desires for Roxanne. He tries to destroy both of them. Eventually, the Duke sends a priest to Roxanne with a note telling her he’s coming home from the battlefield just to marry her or to take her physically. She lies to the priest about the note and quickly marries Christian just before the Duke enters.

To get rid of them, the Duke sends Christian and Cyrano to the front line of the most intense battle. Christian realizes that Roxanne loves his soul, who is Cyrano, not him. He wants to tell Roxanne the truth.

Will Roxanne find out that Cyrano is her beloved muse? Will anyone survive the battle? Will Cyrano overcome his pride to tell Roxanne the truth?

The direction of CYRANO (2021) is so good that the apparently politically correct casting becomes an asset rather than a detriment. The dialogue and interactions between the characters are excellent. Every major character references God, and faith, salvation, conversion refute Roxanne and Christian’s romantic attractions, which is based purely on looks. The movie has some intense moments, but they are portrayed with such grace that they never go over the top. The songs are so integral to the characters that it’s easy to forget it’s a musical. Overall, this is an extraordinary movie. It should receive several awards. There should be a caution for young children, but for older children and adults the entertainment value of the movie and the surprising moral conclusion are well worth watching.