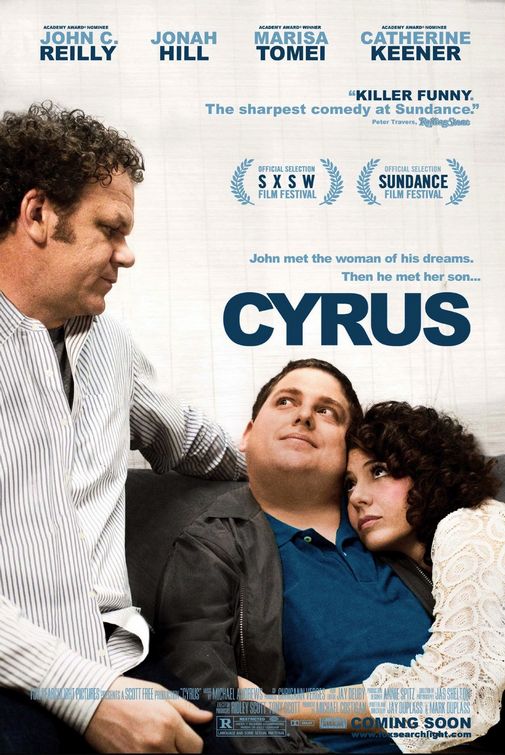 CYRUS is a droll, funny comedy about a divorced man who has trouble with his new girlfriend’s adult son, who secretly tries to break up their relationship. John and Molly seem to be made for one another, but Molly’s chubby 21-year-old son, Cyrus, still lives with her. Surreptitiously, Cyrus is trying to sabotage their relationship. He warns Cyrus, but this only incites Cyrus even further. Their conflict over Molly comes to a head at the wedding of John’s ex-wife, in a very funny scene.

CYRUS is a funny, touching tale of modern dysfunction. The characters are more pagan than Christian, though there’s a positive reference to the Bible at a liberal Christian wedding. Viewers should watch out for the movie’s 34 obscenities, including many “f” bombs, as well as some innuendo. Despite this, CYRUS seems to have a light moral subtext that appears to support a more traditional, biblical view of marriage and family. If you have Non-Christian friends or relatives who mention they’ve seen the movie, you might bring that up to them. CYRUS is designed for older viewers, so please be sure to visit Movieguide.org for more family-friendly movies.

(PaPa, PC, C, B, Fe, LLL, V, S, N, AA, M) Strong, slightly mixed, pagan liberal worldview with a wedding ceremony with a female pastor holding a Bible open and some biblical, moral elements implying that a more traditional view of marriage and family is best, plus the light feminist element of a female pastor; about 34 obscenities (many “f” words) and three light profanities, plus some obscene gestures during a secret argument; some fighting and punching in one scene and older man threatens to knock 21-year-old man out if he tries to start something at his ex-wife’s wedding ceremony; implied fornication in two scenes, adult son interrupts mom and boyfriend while she just stripped down to her slip and sat on boyfriend’s lap and some light innuendo but nothing explicit or graphic; upper male nudity in a couple scenes, rear male nudity in one scene and woman shown in a slip and with a towel around her after a shower; alcohol use and drunkenness in one scene; no smoking or drugs; and, lying, young man hides the shoes of his mother’s new boyfriend, young man tries to break up his mother’s romance.

CYRUS is a funny, touching tale of modern dysfunction. The characters are more pagan than Christian, though a wedding ceremony with a female pastor does take place in one scene. Moviegoers should watch out for the movie’s R-rated “f” bombs, however, as well as some sexual innuendoes.

The movie opens with John C. Reilly as John getting invited by his soon-to-be-remarried ex-wife inviting him to a party. Reluctantly, John dresses up and goes to the party, where he strikes out several times trying to engage women into conversation.

Sitting on the couch, he tries a different tack with a plain girl. Instead of being cool and aloof, he opens up to her and honestly tells her about his problems and his loneliness since his divorce. Almost immediately, the woman gets up, saying she suddenly has to make a phone call.

John gives up and decides to get drunk. Outside, during an awkward moment, John meets Molly, played by Marisa Tomei. Molly tells John how much she appreciated his honesty with the plain girl, which she overheard.

Molly and John strike up a relationship right away. She sleeps over twice at his apartment but leaves both times early in the night. The second time, John decides to secretly follow her. He follows her to her house, where he sees that some man is in her house. John keeps watching the house but falls asleep in his car while waiting outside.

The next morning, after Molly has apparently gone jogging, John decides to sneak around the house to see what he can find out. While doing that, he’s surprised by the man in the house, who turns out to be Molly’s chubby 21-year-old son, Cyrus.

Inside the house, John tries to be cool and honest with Cyrus, even when Cyrus starts playing some of the slightly weird, jazzy electronic music he writes. John learns Cyrus is a wannabe musician who still lives with his mother.

When Molly finally returns from her jog, she is awkwardly surprised to find John there. Cyrus then wonders aloud if John is going to stay for dinner. Molly awkwardly replies, yeah, sure.

At dinner, John decides to continue his new honesty policy. He talks briefly about his divorce and his ex-wife’s plans to remarry, then admits to Cyrus that Molly and he have been sleeping together. Cyrus acts nonchalantly about that last bit of news, so John decides to stay the night.

During the evening, more awkward situations occur. For instance, Cyrus bursts into the bathroom while Molly is taking a shower and shuts the door behind him. Also, John tries to close the door to the bedroom when Cyrus goes to his room for the night, but Molly re-opens it, saying that they don’t keep closed doors in their house. Finally, that night, Cyrus suddenly screams out (he’s suddenly starting to get “night terrors” like the ones he suffered when he was younger). Molly rushes to comfort Cyrus and, forgetting all about John in the next room, falls asleep in her son’s room.

The next morning, John’s suspicions about Cyrus are further aroused when he can’t find his tennis shoes. Eventually, his suspicions are confirmed. John finds out Cyrus is doing all he can to sabotage John’s relationship with Molly.

Realizing that Molly dotes on Cyrus way too much, John decides to confront Cyrus behind Molly’s back. Don’t mess with me, he tells Cyrus, but that just instigates Cyrus even more. Their conflict over Molly’s affection come to a head at the wedding of John’s ex-wife, in a very funny scene.

CYRUS the movie is a relationship comedy. Though the situations are sometimes absurd and unlikely, the filmmakers shoot in a realistic style, encouraging the actors to flesh out their characters naturally. This results in an engaging movie that is alternatively funny and touching. There’s an honesty about John and Molly that makes them even more endearing and more sympathetic. The question becomes, then, whether Cyrus will let John and his mother find some happiness together and eventually get married.

Though John’s ex-wife has an outdoor wedding with a female pastor who holds a Bible while delivering the vows, the characters in CYRUS are more pagan than Christian. Also, the movie contains no positive mentions of God but does include plenty of strong foul language. It also has some sexual content, but it doesn’t go beyond some passionate kissing and innuendo.

Thus, while the movie’s obscenities, sexual elements and non-religious worldview require extreme caution, its content does not stray into an explicit or extremely graphic territory. In fact, viewers can draw a couple positive conclusions from CYRUS. First, the movie implies, perhaps unintentionally, that single motherhood is not an ideal situation, especially if the mother is going to have men stay overnight with her before marriage. Secondly, the movie implies that children need a father. Otherwise, they can become too attached to their mother and begin to act out in negative ways, even as adults. Despite, therefore, the movie’s obvious liberal, pagan sensibilities and more profane moments, in the end, there is a subtext that seems to support a more traditional, biblical view of marriage and family. This shows that, no matter how hard people try, they can’t always ignore or rebel against all the values that God has revealed to us in His Word, the Bible. That’s partly because people live in the universe that God created for them.

Moviegoers still need to be careful about CYRUS because of its foul language, innuendo and unbiblical content. Consequently, MOVIEGUIDE® advises readers to think twice before attending a showing of CYRUS.