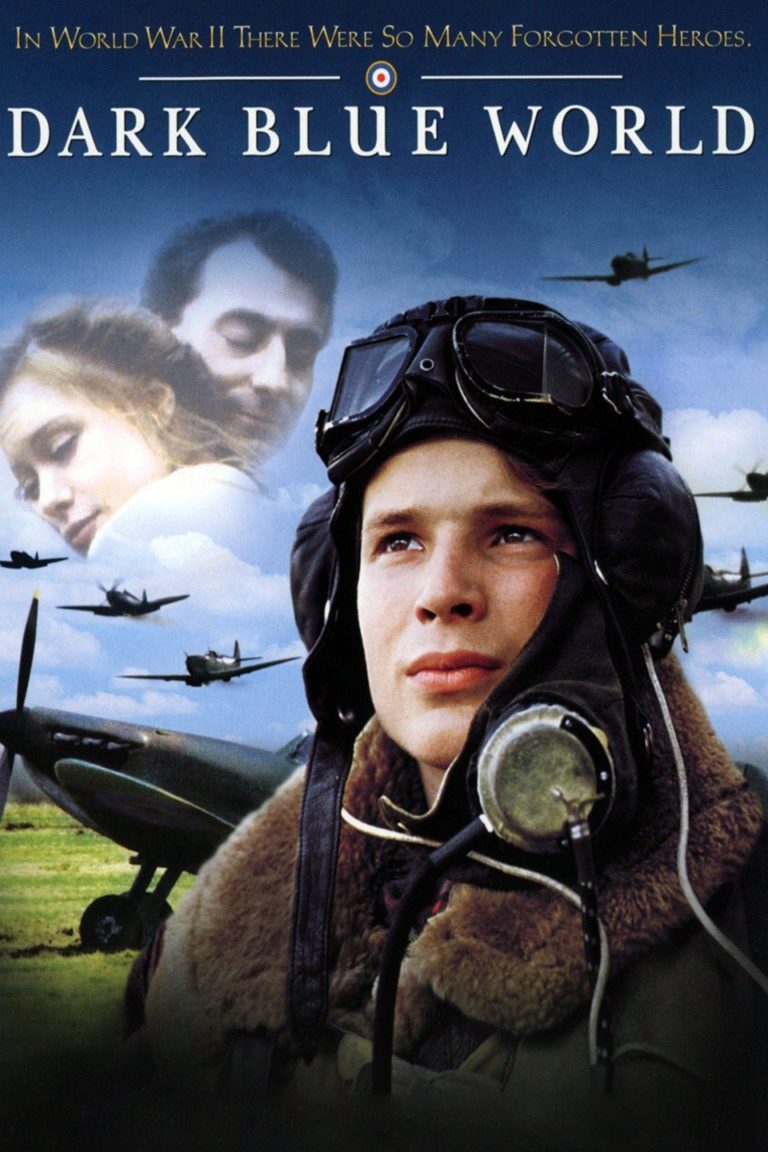 DARK BLUE WORLD opens in 1950 and tells us that after World War II, the Czech pilots and soldiers who had managed to escape to England during the war to join the British to fight against Adolph Hitler were later imprisoned by the Communists when they came home. The movie flashes back to 1939 when a pilot, Franta, and a trainee, Karel, escape to England to fight Nazi Germany. They fall in love with the same Englishwoman, which breaks their relationship. They fight and stop talking until Franta’s plane is lost, and Karel goes to save him. While this World War II story is progressing, there are flash forwards to the 1950s Communist concentration camp, where a tragic tale is playing itself out.

DARK BLUE WORLD is an earnest war movie that too often resembles PEARL HARBOR, with a European sensibility. There are some dramatic war scenes, hopeful moments and redemptive actions where buddies are willing to sacrifice themselves for each other. The movie is also clearly anti-fascist and anti-Communist, and makes a perceptive connection between the two. This well-made war film is hobbled, however, by some disturbing sexual dalliances, just as PEARL HARBOR was

DARK BLUE WORLD is an earnest war movie that too often resembles PEARL HARBOR, but with a European sensibility. There are some dramatic war scenes, hopeful moments and even redemptive actions where buddies are willing to sacrifice themselves for each other. This well-made war film is hobbled, however, just as PEARL HARBOR was, by some disturbing sexual dalliances.

The movie opens in 1950 and tells us that after World War II, the Czech pilots and soldiers who had managed to escape to England to join the British to fight against Adolph Hitler were imprisoned by the Communists when they came home to Czechoslovakia after the war. Furthermore, the Communists treated them worse than even the Nazis. As if to prove this point, there is a Nazi doctor in a concentration cell with three Czechs, one of whom is our hero, the ex-RAF pilot Franta Slama.

The movie flashes back to 1939. Franta is having a sexual escapade with the love of his life, the very beautiful Hanicka. Franta is in the Czech Air Force. Soon, the radio announces that the Germans are ordering the Czech armed services to disband and turn over all of their equipment to the Nazis. A young trainee pilot named Karel is furious that Czechoslovakia would just submit to the German order. Therefore, Franta decides that he and Karel will escape.

Eventually, they make their way to England and are reunited with other Czech pilots at an RAF air base. In between training, the naïve Karel is lovesick. He even carries some nude pornographic pictures with him.

When Karel is shot down, he survives and makes his way to an English manor house. He is taken in by Susan, a very beautiful woman whose husband is in the British Navy and has been missing in action for almost a year. Karel takes advantage of Susan.

When he gets back to the base, he can only dream of Susan. On his day off from some spectacular aerial dogfights, Karel takes Franta to meet Susan. Susan falls for Franta, which brings disaster in his relationship with Karel. Franta and Karel fight and stop talking until Franta’s plane is lost at sea, and Karel sacrifices his own life to save Franta. While this World War II story is progreessing, there are flash forwards to the 1950s Communist concentration camp, where another tragic tale is playing itself out.

Based in part on a true story, DARK BLUE WORLD is a well-crafted, revealing movie. However, its slow pacing and low budget set it apart from similar American war movies. The acting is very realistic. Although Franta is quite capable of handling himself in the world, he has a melancholy edge which makes his character compelling. The Czech music and attention to historical detail build the mood of the movie.

There are some positive themes in DARK BLUE WORLD. Several of the pilots sacrifice themselves for their friends. The movie is also clearly anti-fascist and anti-Communist, and makes a perceptive connection between the two. The movie understands the difference between the people who fight in a war and the ideologies for which they fight. There are some positive shots of angels and a beguiling spiritual shot of the Communist concentration camp which is housed, in part, in an old cathedral.

On the other hand, much of the movie seems to be humanist. There seems to be more appeals to sexual gratification than spiritual atonement. The sexual relationships are threaded throughout the movie without thought for their moral and spiritual consequences. Some of the sexual scenes look like the obligatory nod to adult film material. The story would have played much better if it had focused on the heroic struggle of the Czech pilots and not their sexual dalliances.