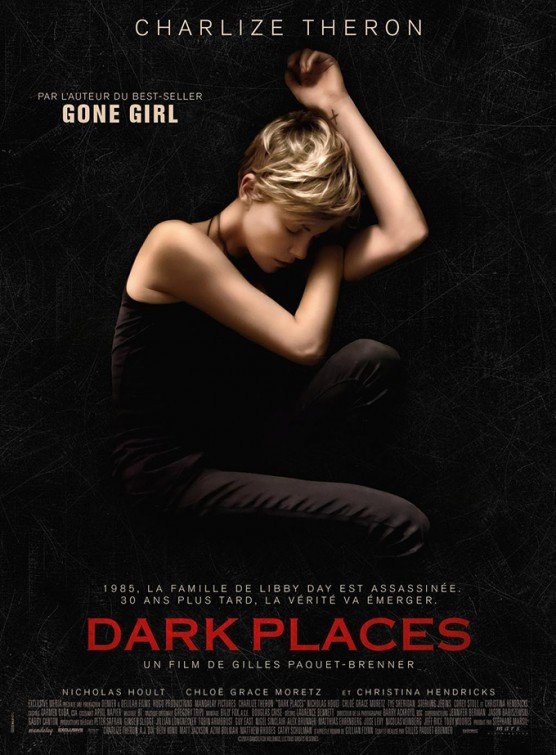 In DARK PLACES, a woman reopens her own investigation into the murder of her family for which her brother was imprisoned 28 years ago. In need of cash, she accepts an offer by an amateur murder club to help them confirm their suspicion that her brother is really innocent. Her curiosity about the brother she never really knew compels her to investigate. What she finds unravels her entire past. It also brings into question the perceptions she’s had of herself and her family all these years.

Based on the best-selling novel by popular mystery writer Gillian Flynn, DARK PLACES feels slightly like a cheap mystery that offers a lot of disturbing and violent thrills. Some of the acting performances and dialogue come across as unrealistic. However, there are enough surprising plot twists to keep viewers guessing until the end. That said, Satanism plays a major role in the story, and sacrificial rituals are depicted. DARK PLACES also contains point-blank shootings of women and children, foul language, teenage pregnancy, and drug use. Overall, therefore, media-wise viewers will probably want to avoid DARK PLACES.

(PaPa, C, OO, LLL, VVV, SS, A, DD, MMM) Strong mixed pagan worldview includes characters don’t seem to have a moral standard by which they live, with Christian elements (including Jesus as a sacrifice is mentioned, and many crucifixes and cross necklaces are seen in several scenes), and some teenagers are Satan worshippers, boy has a notebook full of writings praising Satan and stating Satanic rituals, group of teenagers pray to Satan and kill some cows as a sacrifice, boy praises Satan on the witness stand in court, a brief news video is shown reporting on the spread of Satanism among young people, and a girl tells someone that she’d been taken into a closet by a boy and shown an altar to Satan along with other sacrifices; approximately 40 obscenities and profanities, slang term used for male private parts, husband calls wife a derogatory slang term in front of their children; some very strong and strong violence includes teenagers discuss Satan requiring sacrifices, and things needing to die, teenagers butcher cows with axes, man breaks into a house and shoots a family with a shotgun, girl shown in hospital room with bandaged foot and scrapes over her body, detective asks girl to tell him that she saw her brother kill her family, gunshots and shouting in a dark house are heard in a dream, people in a murder club dress up as victims, and a murder reenactment is very briefly shown, pictures of a murder crime scene with dead victims are shown briefly, two women shove each other as one tries to escape a potentially deadly situation, husband physically intimidates his wife and daughter, man holds a woman at gunpoint, a girl trips and creates a bloody wound on her foot; teenage fornication briefly depicted, teenage girl is pregnant, and teenage boy is accused of pedophilia; no nudity; people are drinking at a club; some cigarette smoking, two scenes depict taking illegal drugs, father is a drug dealer, a couple of scenes show a man discussing drug deals with teenagers; and, father leaves family, husband steals money from his wife, son is disobedient towards his mom, woman lies about who she is, mother hires a serial killer to murder her and her children.

In DARK PLACES, a woman reopens an investigation into the murder of her family for which her brother was imprisoned 28 years ago. Based on the best-selling novel by popular mystery novelist Gillian Flynn, this movie feels like a cheap mystery that offers a lot of disturbing, violent thrills.

DARK PLACES begins 28 years in the past as 7-year-old Libby Day is questioned by a homicide investigator about the murder of her mother and two sisters. She sits crying on a hospital bed, emotionally and physically injured, caving to the incessant demands that she confess to having seen her 15-year-old brother, Ben, kill her family that night.

Cut to the present. Libby, now in her thirties, wakes from a nightmare about the trauma. It is quickly determined that she’s broke, having run out of funds from her book and people donating to the lonely child who survived the Kansas Prairie Massacre. In all the time since, she has failed to progress with her life and has no means of supporting herself.

By chance, Libby receives a letter in the mail from Lyle, a member of an amateur “murder club” that conducts its own unofficial investigations into high profile murder cases in an attempt to dig up the truth about what happened. He wants to hire Libby to attend one of their meetings and allow them to question her about her case. In need of cash, she agrees, but is caught off-guard when she learns they believe Ben to be innocent. Lyle presses her to go visit Ben in prison and try to get more information from him. She balks at first, having sworn off her brother a long time ago. However, her curiosity about the brother she never really knew compels her to go.

Although Ben claims innocence, she questions why he never filed for an appeal and chalks it up to his own guilt. Soon, however, Lyle begins to uncover more information about the case that doesn’t add up. Libby realizes that her own memories and her recent chat with Ben give Lyle’s claims more merit than she would like. Still in need of money, she continues to look into new leads in exchange for payment. What she finds unravels her entire past and brings into question the perceptions she’s had of herself and her family all of these years.

Despite being based on a best-selling novel, the movie can’t help but come off slightly cheapened by some questionable acting performances and unrealistic dialogue. For people who enjoy mystery thrillers and haven’t read the book, the story will keep them guessing until the end. The plot does seem very realistic, unfortunately so, in this day and age. However, the resolution is somewhat of a disappointment considering all of the buildup regarding the family. The filmmakers chose to tell the story in a nonlinear way, moving back and forth between the past and the present. This was partially effective, but some of the cuts are disorienting.

Violence and Satanism play major roles in the story. There isn’t so much gore as there is in-your-face disturbing events that take place. A group of teenage devil worshippers perform rituals to Satan before slaughtering a small herd of cattle, demanding that a sacrifice be made. A woman and her children are shot point-blank by a shotgun, and it’s made even worse by the knowledge of why the crime happened. Also, illegal drugs, teenage pregnancy, foul language, and a dysfunctional family are all major issues. Overall, therefore, media-wise viewers probably will find DARK PLACES too disturbing to watch.