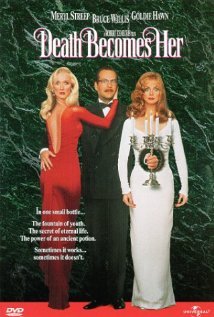 In DEATH BECOMES HER, Bruce Willis plays a plastic surgeon who is drawn into a rivalry by the two vain, age-obsessed women he loves. By drinking a magic potion, each woman finds immortality; however, they fail to think through the consequences of living forever as sinners with its many repercussions. DEATH BECOMES HER is laced with obscenities, full-length female nudity and occult practices.

In DEATH BECOMES HER, set in Beverly Hills, Dr. Mandel (Bruce Willis) is a plastic surgeon who keeps his clients looking youthful. However, when his wife Madeline (Meryl Streep) has to compete with a youthful rival (Goldie Hawn), she seeks the help of a mystic–Isabella Rossellini. Isabella has a magic potion, which renews youth for a season. When Madeline arrives home, she and her husband argue, and he pushes her down the stairs. Madeline gets up with her head turned around–a triviality which she remedies. When Hawn reappears, Madeline shoots her. However, she, too, recovers with a huge abdominal “see through” hole! Madeline complains, “So you have taken the potion, too…?” Years later, at Dr. Mandel’s funeral, the women, who have become dysfunctional friends, fall down the church stairs, winding up with their body parts disconnected.

DEATH BECOMES HER is laced with obscenities, full-length female nudity and occult practices. The two women will supposedly live on in a fallen, sinful condition. As Christians, it is only as we find eternal life through Jesus Christ that we have any guarantees that we can and will live forever.