DEVIL IN A BLUE DRESS 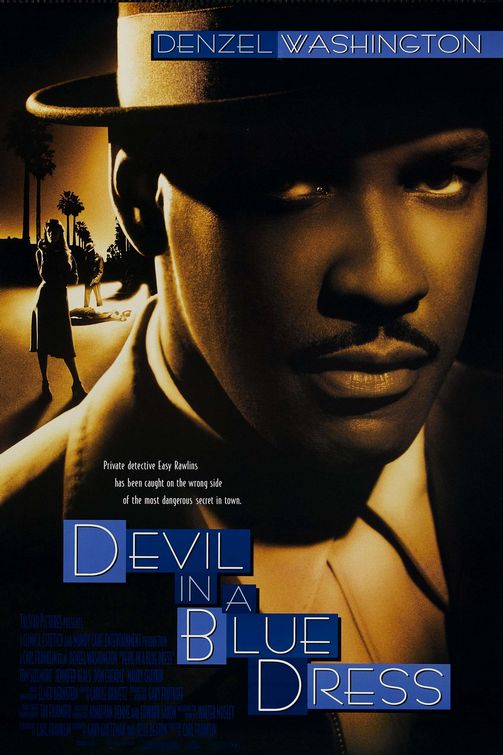 When Easy Rollins looses his job, he agrees to find a A DEVIL IN A BLUE DRESS. Along the way he will be accused of murder, beat up and attacked, but at least he does find the devil, a woman named Daphne, and gets the money in the end. Too bad that such fine acting and production quality has to be wasted on another movie that is violent instead of suspenseful.

When Easy Rollins (played by Denzel Washington) looses his job, he agrees to find a A DEVIL IN A BLUE DRESS. She is a girl named Daphne Monet (played by Jennifer Beals), Mayor Carter’s girlfriend. Along the way, he gets beat up for a murder about which he knows nothing. When he discovers another murder victim, he learns why the men want Daphne: she had pictures of a mayoral candidate named Terrell in a compromising position. Easy finds Daphne, but a shoot-out ensues. After the smoke clears, she reveals she is half-black and realizes that Mayor Carter will never marry her because of the social stigma. In the end, Daphne leaves town, and Easy gets his money from the mayor allowing him keep his house and “take it easy” for a while.

Denzel Washington acts with excellence. Jennifer Beals does a good job as Daphne. Thematically, the film seems to conclude that money brings happiness and murder brings money. Regrettably, bad cops were often the ones murdered. Granted, there are bad policemen, but too many movies today fail to show policemen in a positive light. So for all the good acting and production quality, it would have been refreshing to watch a good mystery unfold. Instead, A DEVIL IN A BLUE DRESS is just another movie portraying violence instead of suspense.