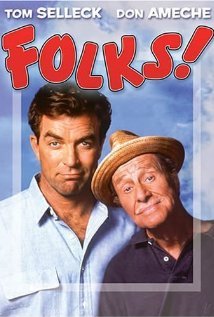 In FOLKS, a successful Chicago commodities broker faces financial ruin after taking in his aging parents, so he contemplates killing his FOLKS to solve his money woes in this hilarious satiric black comedy. Good timing and fast pacing accompany good performances in this movie which stresses the importance of the family, as love triumphs over the evil of selfish materialism.

(B, L, V, S) This humorous, satiric morality tale about learning to love your family more than your material possessions is marred by 2 obscenities and 2 profanities, sexual innuendo and implied immorality, and slapstick violence.

FOLKS is an hilarious, satiric geriatric mishmash about Jon Aldrige, a successful Chicago broker with a loving wife Audrey and a luxurious life, who travels to Florida to check on his ailing parents. His father, Harry, doesn’t recognize Jon at first. When he does, he burns his house down (inadvertently), and Jon realizes he must take his parents back to Chicago to live with him. When they arrive in Chicago, Harry causes a series of hilarious disasters, reducing Jon’s life to a complete shambles. So when Jon’s divorced sister Arlene arrives, they agree to kill their parents for the insurance. Amazingly, the parents go along with the idea. However, each plan humorously fizzles, until Jon realizes his selfishness and tells his parents he loves them and wants them to forget trying to kill themselves.

A satiric commentary on our materialistic times which tries to right our attitudes through exaggeration and humor, FOLKS has a happy ending which stresses the importance of the family, as love triumphs over selfish materialism. Good timing and fast pacing accompany good performances in this movie which emphasizes the fact that a loving family is more important than material possessions.