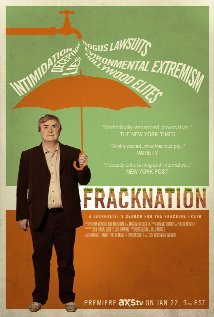 FRACKNATION is an eye-opening, stimulating, entertaining documentary about the deceit and lies the environmentalist movement often uses to scare people. It focuses on the hydraulic fracturing process, or “fracking,” that energy companies use for getting oil and gas from shale deposits underground. The environmentalists have managed to lobby some state and federal governments in America, and governments around the world, to shut down fracking operations. Irish journalist Phelim McAleer investigates the claims by environmentalists and lawsuit hungry activists that the fracking process is dangerous or causes pollution. He tries to hold their feet to the fire. However, in four confrontations, they clearly try to evade him.

FRACKNATION is an important documentary to see. Once again, the radical environmental movement has been proved wrong. Or, so it would seem. In fact, National Review Online says a review by the Duke Environmental Law & Policy Forum “reached the same conclusion” as FRACKNATION. Also, word has it New York’s state government leaked a new study showing fracking is safe. FRACKNATION is a fracking good indictment of environmentalist hysteria and the gullible celebrities flocking to its latest cause célèbre.

(BBB, PP, CapCapCap, L, V, M) Very strong moral worldview about seeking and finding truth and fighting deceit and slander, with strong Pro-American, very strong pro-capitalist elements and values, exposing lies and pseudo-science by anti-capitalist environmentalists’ hysteria against the hydrauling fracturing, or fracking, procedure to get natural gas sitting below the water table; one profane JC exclamation in a clip from another documentary and one bleeped “f” word an angry environmentalist shouts at local farmers; man is startled by fire coming from his faucet because his home has natural methane gas under it, and greedy woman in her car threatens journalist with gun somewhere in car when he asks her simple questions about her failing lawsuit against an energy company; no sex; no nudity; no alcohol; no smoking or drugs; and, environmentalist documentary filmmaker evades honest questioning, man threatened, and apparent environmentalist in car speeding passed hurls obscene insult.

FRACKNATION is an eye-opening, stimulating, entertaining documentary about the deceit and lies that the environmentalist movement uses to scare people. It focuses on the hydraulic fracturing, or “fracking,” process energy companies use for getting oil and gas from shale deposits. Apparently, the environmentalists have managed to lobby the state and federal governments in America, and governments around the world, to shut down many fracking operations.

In FRACKNATION, Irish journalist Phelim McAleer investigates the claims by environmentalists that the fracking process is dangerous or causes pollution. Much of his documentary focuses on a farming community in Pennsylvania. When some farmers leased their land to the oil companies, a few other local citizens .

FRACKNATION also takes on Josh Fox, the award-winning filmmaker behind the anti-fracking documentary GASLAND. For instance, the documentary shows that some places have natural methane gas around their wells and water pipes, which can set your faucet on fire if you light a match there. Such gas is naturally occurring and has nothing to do with fracking, but Fox’s documentary apparently lied and said it did. FRACKNATION also shows that Fox’s claims that fracking causes earthquakes or releases chemicals in high enough doses to cause cancer are false. For example, it shows that many chemicals are naturally occurring in low doses, including healthy vegetables like broccoli. People are exposed to low doses of these chemicals every day, an expert interviewed by McAleer says. They don’t cause cancer unless you ingest them in massive doses. FRACKNATION also shows that fracking isn’t associated with earthquakes but that geothermal plants in Northern California (one of the environmentalists’ favorite alternative energy schemes) are. FRACKNATION even takes on the environmentalists’ love affair with solar panels. It says solar panels can’t be made without mining for rare metals, and such mining is known to cause really serious pollution in places like China.

Finally, FRACKNATION shows that many family farms in the USA and around the world could really use the income that comes from fracking wells. And, the world needs energy to help m,ake life better for billions of people. To prove this point, McAleer travels to Poland to interview an elderly woman, who supports Polish fracking because Russia charges her and other Poles lots of money for Russian oil and gas to heat their homes, light their lights, and cook their food. Of course, the leader of Russia, President Putin, is a major opponent of fracking. Imagine that!!!

FRACKNATION is only 77 minutes long, so it could use some more details to support its findings. For example, it could use more details from one or two additional sources about the alleged cancer-causing chemicals. That said, there are enough details in it to anger anyone truly interested in the truth about this controversial energy process. In the past, environmentalist hysteria about things like DDT and population growth have ruined many lives, and even killed millions of people through things like malaria and abortion. Apparently, the anti-fracking hysteria is very similar. It’s even captured the mind of Hollywood celebrities, such as actor Matt Damon whose anti-fracking movie PROMISED LAND is being funded by Arab oil and gas sheikhs.

FRACKNATION clearly and firmly exposes the lies and deceit behind much of the environmentalist movement. It also shows fracking opponents like Fox and a lawsuit-happy family in rural Pennsylvania refusing to answer serious questions about their claims against fracking. In fact, Fox has McAleer thrown out of a public meeting on the subject of fracking. He also hangs up on him.

What are these people afraid of? The truth? Apparently so!

Also, one of the funniest scenes in FRACKNATION is a clip from a meeting the Pennsylvania family had with the federal Environmental Protection Agency, which found that there was absolutely nothing wrong with their tapwater. The mother and father get ridiculously upset when they learn their tapwater is actually okay. Poor babies! Now, they might not collect thousands of dollars from the gas company.

FRACKNATION is an important documentary to see. Once again, the environmental movement has been proven wrong. Or, so it would seem. In fact, National Review Online itself points out, “A comprehensive review in the Duke Environmental Law & Policy Forum reached the same conclusion as McAleer: ‘. . . hydraulic fracturing is a safe and effective way to recover oil and gas from shale formations’ (http://www.nationalreview.com/corner/337024/ifracknationi-elegant-antidote-media-misinformation-mark-p-mills).” Apparently, also, New York’s state government has leaked a new study showing fracking is safe.

MOVIEGUIDE® advises all its readers to be skeptical about any movie that makes truth claims about a controversial subject. Even so, more often than not, we find that liberal and leftist movies like GASLAND, PROMISED LAND, Bill Maher’s Anti-Christian diatribe RELIGULOUS, or Michael Moore’s movies are often the most deceitful if not the most slanderous. So, please take anything they say with a very large grain of salt.