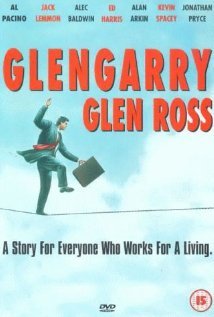 (H, LLL, M, A/D) Humanist diatribe complete with: approximately 135 obscenities and 10 profanities, most presented in a context of verbal abuse; salesmen proudly use deceptive and harassing tactics to secure closings, & salesmen plan to rob their company and sell valuable information to rivals; and, a salesman gets intoxicated with client and uses this camaraderie as a springboard to a sale.

Adults on the Pulitzer Prize winning play by David Mamet, GLENGARRY GLEN ROSS is an exploration into the dark hearts of four salesmen who are threatened with the loss of their jobs. The salesmen cultivate deception, persuasion and self-protection. This is a harsh and cynical movie, with no heroes or admirable characters but with much obscene abuse and antagonistic banter. on an award-winning play by David Mamet, GLENGARRY GLEN ROSS focuses on four salesmen threatened with the loss of their jobs. At a meeting of Consolidated Properties, salesmen David Moss, George Aaronanow and Sheldon Levine are met by a hostile coordinator. Ricky Roma, a fourth salesman, is not present due to his impeccable sales record. The coordinator castigates the men and outlines a deal: the salesman with the highest sales wins a Cadillac; the second place salesman wins steak knives; and, the third place salesman gets fired. Feeling abused, these three go off into the night to deal with the situation. Rather than use old hackneyed techniques like Sheldon, or complain like Moss and Aaronanow, Ricky Roma slides up to a bar and waxes philosophical with his buyer, thus snaring a lucrative contract.

GLENGARRY GLEN ROSS is a harsh and cynical movie, without heroes or even admirable characters. These salesmen are like gangsters, except that gangsters would be more supportive of each other. Although this movie is devoid of physical violence, the constant profanity and verbal abuse is disturbing and harrowing enough. GLENGARRY GLEN ROSS is a waste of some admirable talent.