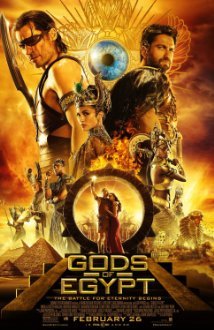 GODS OF EGYPT is a mythical story about two Egyptian gods, Set and Horus, who struggle with each other to take control of Egypt. Set is driven by a thirst for power, and Horus by a thirst for revenge. Both are wrong, but Set takes the dark path while Horus is able to reconsider his position and make amends. Mortal humans play an integral role in the battle for supremacy, and they share in the victories as well as the defeats. The story begins when Set, the Egyptian god of darkness, murders the god King Osiris as he’s about to crown Horus.

GODS OF EGYPT pits two mighty pagan gods against each other. No humans or property are spared. Although some of the sets, costumes and acting are cheesy, the special digital visual effects are impressive and the action-packed story is entertaining. Despite the pagan mythology, GODS OF EGPYPT contains some moral, redemptive content that may remind one of the biblical stories of Joseph and Samson. However, it’s marred by adult themes involving illicit sex and an unexpected expletive. So, MOVIEGUIDE® advises extreme caution for GODS OF EGYPT.

(PaPa, B, C, L, VV, S, N, MM) Strong pagan worldview involving pagan Egyptian mythology and polytheism, mitigated by some moral, redemptive elements, including repentance, making amends and a theme of resurrection within a mythological Egyptian context, which some believe is a clear influence from the Hebrews who lived among the Egyptians in ancient times before Moses; an obscenity is uttered by an Egyptian god character; multiple acts of strong action violence include murder and killings in battle, and humans, creatures and gods are killed by various methods such as stabbing with swords and knives, bludgeoning and crushing, being impaled, and falling into abysses, plus a minotaur’s head is decapitated; implied fornication; brief nudity of a female’s back and upper male nudity, but nothing explicit; no alcohol; no smoking or drugs; and, deceit, lying, greed, stealing, revenge.

GODS OF EGYPT tells the mythical story of the ensuing epic struggle that erupts after Set, the Egyptian god of darkness, murders King Osiris as he’s about to crown Set’s nephew, Horus, the Egyptian god of power and the morning star. GODS OF EGYPT is entertaining, with impressive special effects and some moral, redemptive elements, but it’s marred by the pagan mythology, adult themes involving illicit sex, and an unexpected expletive.

As the movie begins, the action finds Bek (Brenton Thwaites), a mortal, and rather charming, young petty thief, stealing a costly dress for the love of his life, the beautiful Zaya (Courtney Eaton). At the other end of town, the Egyptian god Horus (Nikolaj Coster-Waldau) is just waking to the new day without much care for the day’s significance. It would seem he doesn’t take his god status and obligations very seriously, but circumstances will change all that in very short order. Only a few hours later, as Horus is about to be crowned by King Osiris.

Set (Gerard Butler), the god of darkness, arrives at the palace with a commanding army, ostensibly to bestow a gift on the new would-be king. Instead of that, Set kills Osiris in front of a stunned audience and eventually defeats Horus in a no holds barred epic battle following the assassination. The victorious Set then removes the eyes from the vanquished Horus and vanishes him into a distant exile.

The kingdom is now in disarray as it trembles in fear under Set’s new tyrannical rule. All is not lost, however. There’s hope in the person of Zaya who happens to work in the royal palace for master builder Urshu (Rufus Sewell) and has access to all the kingdom’s building plans.

Meanwhile, Horus’ eyes may no longer be in their sockets but they’re intact, and their location can be found in one of the maps. Zaya hands the map to Bek, and he sets out in earnest to find them.

As Set continues to consolidate his power over the empire, the young mortal, Bek, is busy risking his life in the search of Horus’ eyes, but not without cost. When Urshu discovers Zaya stole the map, Urshu confronts the couple. As they try to flee from him, Zaya is mortally wounded.

Happily, Bek is able to hold on to one of Horus’ eyes and locates him where he now lives in total blindness. One thing is foremost in Bek’s heart. He cannot bear the loss of Zaya, and immediately strikes up a bargain with the god. He stipulates that, if Horus intercedes with Anubis (Goran D. Kleut), the god of the underworld, to bring back Zaya from the dead, Bek will help him find his other eye and retake the kingdom from his uncle Set.

As they proceed on their quest, a number of impressive action scenes and breathtaking scenery take place, the stuff mythology is made out of, enhanced by the CGI special effects of course. They fight multiple battles with gods and mythological beasts alike, to the point where mortals and gods become almost equals in the efforts that unite them. At a later stage, Bek and Horus meet and consult with Thoth (Chadwick Boseman) the god of the moon and learning, who joins them in their journey to face the mighty sphinx and answer a riddle, or die before they can go any further.

A side plot also develops where the goddess of love, Hathor’s (Elodie Yung), affections are contested by Set and Horus alike. All along the way, the god of the sun, as well as the grandfather, Ra (Geoffrey Rush), oversees the goings on from high above in his majestic celestial chariot. Ra discusses the difficult situation with Horus and later with Set, but Ra decides to maintain a hands-off policy because he loves both Horus and Set equally, and allows the struggle to continue. It will be hard for him to stay out of the conflict, however, as Set’s unrealistic ambitions, even for a god, eventually may have to force Ra’s hand.

Meanwhile, Horus’s own interaction with Bek and goddess Hathor, as well as the nonstop challenges he faces in his struggle against Set, forces him to re-evaluate his own life. he begins to recognize the errors of his earlier years living as a selfish, uncaring god.

The art and set design in GODS OF EGYPT resembles a mixture of ancient Egypt and a Las Vegas hotel, along with a wardrobe which could also work well at a Super Bowl halftime show. Some of the performances aren’t worthy of even an elementary acting class, but GODS OF EGYPT still has some basic charm, with several positive moral, redemptive messages thrown into the mix. The physical contrast between the Egyptian gods and the mortals, which depicts the gods as veritable 8-foot giants is also worth noting, and the triumph of good over evil will always have some redemptive value.

The version screened by MOVIEGUIDE® was in a 3-D format. Frankly, it wasn’t worth it because, after the opening action scene, it became rather unnoticeable for the remainder of the movie. The main characters, from Gerald Butler as Set to Nikolaj Coster-Waldau as Horus, Elodie Yung, and Chadwick Boseman are very engaging in their respective roles. The relationship between Courtney Eaton and Brenton Thwaites as the youthful mortal subjects who love each other deeply is truly endearing.

Also, for a viewer with a Christian perspective, it wasn’t hard to make some pleasant biblical connections to Judeo-Christian values and history where Bek is reminiscent of Joseph, and Horus of Samson. Sadly, Geoffrey Rush’s performance as Ra didn’t seem to live up to the rest of the cast. His performance was rather lackluster for such a revered actor. He was the least believable as a mythical figure.

GODS OF EGYPT also seems to suffer from a little bit of an identity crisis as it seeks to achieve the too often desired PG-13 rating a bit too strenuously. Thus, there’s brief foul language and some scenes where implied fornication and extramarital sex takes place and is tacitly condoned. So, MOVIEGUIDE® advises extreme caution for that content and the movie’s mythological pagan worldview. The action violence in GIODS OF EGYPT is another concern, but it’s fairly average and expected for this kind of fantasy action adventure.