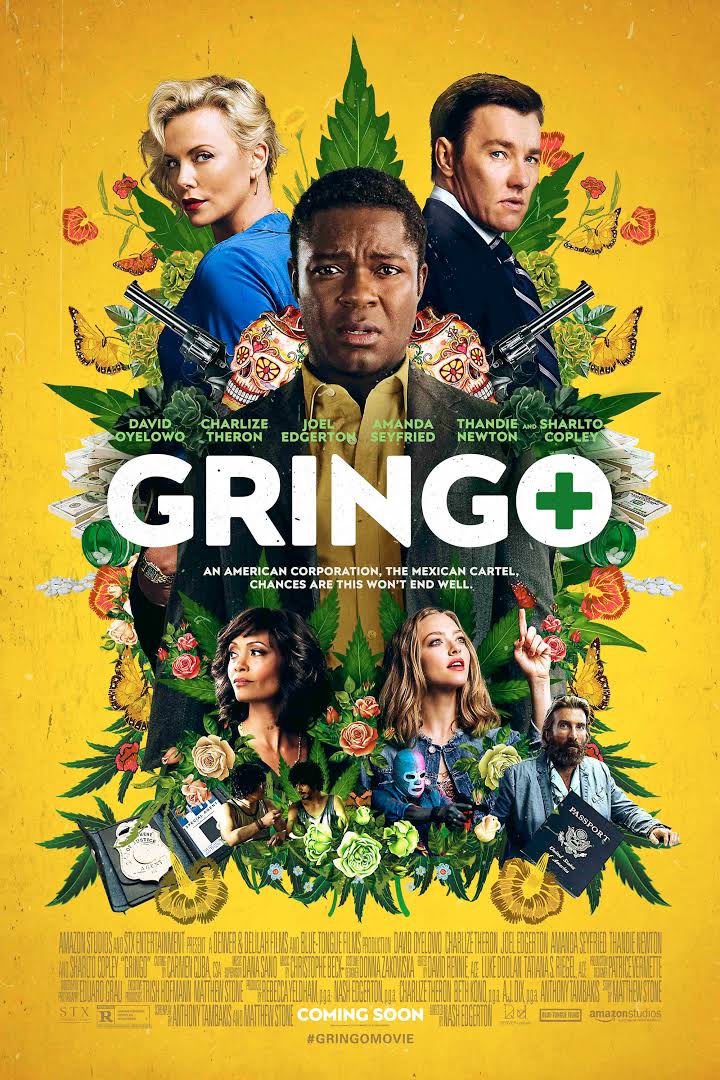 GRINGO is a mediocre action comedy about a Nigerian-American, Harold, who is taken advantage by everyone, including his two American bosses and his own wife who’s cheating on him with his boss. While on a business trip in Mexico, Harold finds out about his wife’s affair. He also finds out the company he works for is about to fire him. Though he’s normally mild mannered and rule abiding, he decides to disappear in Mexico to fake his own kidnapping for a ransom. It goes horribly wrong, however.

To say GRINGO is convoluted is an understatement. The amount of unnecessary characters, plotlines and static scenes is actually mind boggling. Worse than that, the movie is really boring. GRINGO does actually have a moral message about doing the right thing, and the bad characters receive justice by the end. There’s even a long conversation about God and the Bible. Harold prays to Jesus and says, “What kind of person does not believe in God?” In the end, though, GRINGO is marred by constant foul language and sexual content, making it boring and excessive.

(B, CC, Ab, LLL, VV, SS, N, A, DD, MM):
Dominant Worldview and Other Worldview Content/Elements:
Light moral worldview about doing the right thing and bad behavior receiving justice and there’s a scene where Jesus is prayed to, and man talks about belief in God, the Bible and the difference between Peter having a crisis of faith in the Bible and Judas betraying Jesus, but a character makes statement about an earthquake being God’s handiwork;
Foul Language:
More than 105 obscenities (including at least 70 “f” words) and eight profanities;
Violence:
Moderate strong violence, such as a man’s toe is cut off, many people are shot in the head, two violent car accidents, man is hit by car;
Sex:
Two implied sex scenes, and one depicted sex scene with characters who are clothed, passionate kissing between couple, woman seduces man and vulgarly references his private parts, and adultery;
Nudity:
No explicit nudity but woman wears cleavage-bearing top through most of the movie;
Alcohol Use:
Lots of alcohol use but no drunkenness;
Smoking and/or Drug Use and Abuse:
No smoking or drug use, but plot revolves around drugs and a marijuana pill; and,
Miscellaneous Immorality:
Strong miscellaneous immorality includes kidnapping, greed, betrayal, and breaking the law.

GRINGO is a mediocre action comedy about a Nigerian-American working for a pharmaceutical company, who gets way over his head with a drug cartel in a trip to Mexico.

Harold Soyinka (David Oyelowo) works as an operations manager for his friend Richard’s company. Richard (Joel Edgerton) is a sex obsessed, greedy boss who acts like he’s looking out for Harold’s best interest, but he’s actually having an affair with Harold’s wife. Richard’s company has been manufacturing a marijuana pill called Cannabax in Mexico in preparation for it to become legal in the United States so he can be the first one with a product for the market. Richard runs the company with Elaine (Charlize Theron), with whom he’s also sleeping.

Harold is in financial ruin because his wife is draining their funds to run her interior design business, which only has one client who happens to be Richard. When Harold hears that the pharmaceutical company may get bought out, and people may be losing their jobs, he starts to worry, but Richard reassures him that he has his back. Before Richard and Elaine sell the company however, they need to wrap up a problem. To make money while they test their Cannabax product, they’ve been selling product to the drug cartel under the table and whiteout Harold’s knowledge, even though he’s in charge of running the operation in Mexico. Now, that they’re ready to go legal, the drug cartel can’t be a client anymore.

While the three are in Mexico, Harold finds out about his wife’s affair with Richard. He also finds out he’s going to be fired after the sale goes through. All his life he’s been told that if he plays by the rules in life, he’ll succeed, but all he gets is betrayed.

So, he decides to disappear into Mexico to fake his own kidnapping and get ransom money through the company’s insurance policy. The only problem is that Richard is too cheap to ever actually have an insurance policy like that, and the drug cartel is looking for Richard, so they can rob the Cannabax lab. In the middle of all this, Harold runs into a young American couple who are in Mexico also to steal from the Cannabax lab.

To say GRINGO is convoluted is an understatement. The amount of unnecessary characters, plotlines and static scenes is actually mind boggling. Worst of all is that the movie is boring. Very little actually happens in the middle of the movie. David Oyelowo is mildly amusing, and by the end you’re definitely satisfied that he receives a happy ending after being double-crossed so many times for simply doing his job.

Happily, GRINGO does actually have a moral message about doing the right thing. Even though Harold finds himself in a bad situation simply because he was doing his job and abiding by the rules, the people that betrayed him receive some sort of justice by the end. In the middle of the movie, there’s also an interesting, though random scene where Harold has a conversation about God and the Bible with Richard’s mercenary brother who was sent to Mexico to get Harold. Harold prays to Jesus and says “What kind of person does not believe in God.”

In the end, though, GRINGO is marred by constant foul language and sexual content, making it boring and excessive.