HOW TO MAKE AN AMERICAN QUILT 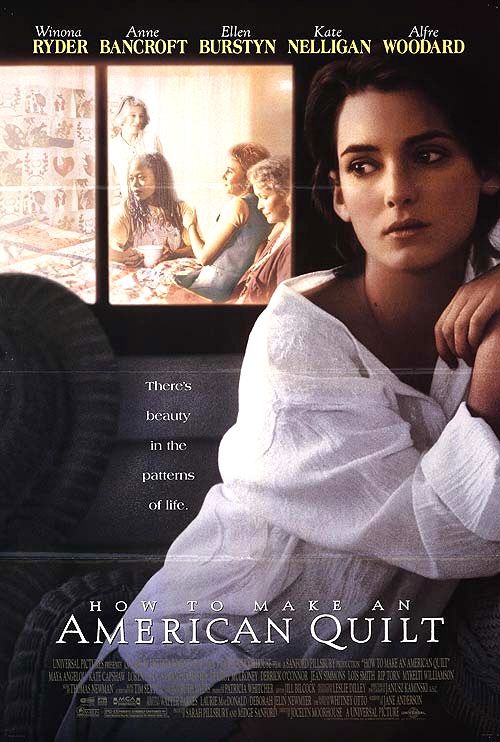 HOW TO MAKE AN AMERICAN QUILT is a warm, but morally confused picture demonstrating the ties that unite a group of American women and their stories of past loves. They tell a young bride-to-be named Finn of adultery, failed expectations, death, and missed opportunities. Including marijuana use and several instances of illicit sex, the movie shows lives frayed and torn, like a heavily used quilt.

HOW TO MAKE AN AMERICAN QUILT is a warm, morally confused picture that focuses on the ties that unite a group of women and their stories of past loves. Winona Ryder plays Finn, a graduate student at Berkeley. Engaged, she is getting cold feet about the big commitment. Finn decides to spend the summer with her grandmother Hy and great aunt Glady Joe to think over her engagement and work on her masters thesis on “Handiwork among Tribal Women.” In the process, not only does she have an affair, but she learns stories of lost loves from the Grasse Quilting Bee, a group of seamstresses specializing in quilts who meet at the house.

Set in Northern California, the scenery is picturesque, and the photography of old homes and beautiful fabrics provides a feeling of nostalgia. It is pleasant to see such determined women creating beautiful works of art. Of course, this pseudo-American ambience covers up the immoral heart of the movie. This movie may touch those stung by the pain of lost love, divorce, death, and other emotional woes surrounding relationships, but it doesn’t provide a message in support of virtue, marriage or love. These women are ungrounded in a moral framework, and, unlike a meticulous quilt pattern, find their lives frayed and torn. They are beautiful in their God-given humanity, but soiled through sin and a lack of knowledge of the truth.