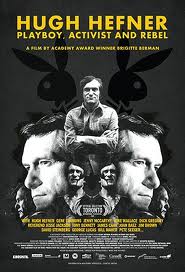 HUGH HEFNER: PLAYBOY, ACTIVIST AND REBEL is a documentary about the famous founder of the nudie magazine. It details the huge influence that Hefner has had in changing modern culture, but it is essentially a prurient puff piece that lets Hefner, not his critics, have the last word. Filled with interviews of Hefner, his friends and some of his enemies, the documentary details the history of Hefner’s scandalous career. It also shows his impact on such issues as sex and nudity in the media, the so-called Sexual Revolution, abortion, and the civil rights movements for blacks. Brief interviews with Pat Boone, moral pundit Dennis Prager and some feminists round out the picture, but Hefner gets the last word.

Despite interviews with some of Hefner’s cultural opponents, this documentary is essentially a puff piece with much explicit nudity. It fails to mention the millions of murdered unborn babies and broken families due to Hefner’s radical PLAYBOY philosophy. Nary a peep is said about the millions of women and children whose lives have been terribly damaged by rapists, pedophiles and other perverts because of Hefner’s crusade for what he and others call “sexual liberation.”

(RoRoRo, AbAbAb, PaPaPa, PCPCPC, RHRHRH, BB, C, FeFeFe, Ho, L, V, SS, NNN, A, DDD, MMM) Very strong Romantic, Anti-Christian, pagan, politically correct, revisionist history worldview with some strong moral comments against racism and segregation and some light Christian and moral opposition to influential magazine publisher’s crusade against all forms of sexual “repression,” but the publisher gets the last word against his opponents, plus very strong feminist comments and content but some of the better feminist arguments are falsely refuted and a reference to homosexual “rights”; eight obscenities (including one written “f” word) and one light profanity (My God); some newsreel footage of Vietnam War and riots, plus discussion of a woman’s suicide; strong sexual references include many nude photos in sexual poses, a joke about incest, voyeurism, and protagonist is clearly extremely promiscuous, even to the point of having a small harem like a Muslim heathen might; several shots of full female nudity in photos, many shots of upper female nudity in photos and some rear female nudity in photos; alcohol use; smoking and a pro-marijuana message; and, black civil rights leaders, activists and celebrities welcome an evil Anti-Christian bigot’s support to the point of forming coalitions with him for civil rights issues dealing with race, some silly anti-war protests during the Vietnam War are discussed or revealed, protagonist celebrates an enemy’s misfortune, liberal and leftist elitism, straw man arguments, Senator Joe McCarthy once again is falsely blamed for the Hollywood blacklist when he had nothing to do with that and his real goal was really to uncover Communist spies working in the government, joke made about Roman Catholic priests abusing boys, and celebrations of hedonism.

HUGH HEFNER: PLAYBOY, ACTIVIST AND REBEL is a documentary about the famous founder of the nudie magazine. It details the huge influence that Hefner has had in changing modern culture, but it is essentially a puff piece that lets Hefner, not his critics, have the last word.

When Hefner started PLAYBOY, he was, believe it or not, an editor of a children’s magazine. Based in Chicago, he was able to connect with a nearby photographer who had the rights to a nude photo of Hollywood actress Marilyn Monroe as a young woman. By featuring that photo, Playboy was able to gain enough notoriety that the rest, as they say, is history.

The documentary goes on to discuss Hefner’s crusades against censorship, segregation, the Vietnam War, laws against marijuana, and what he calls “sexual repression.” It also details the changes in the magazine down through the years and his private life, including his ongoing relationships with several women at one time and his second marriage, which also ended in divorce. It is clear Hefner is most proud of his “contributions” not only to the so-called Sexual Revolution of the 1960s, but also his crusades for civil rights for black people, abortion on demand and appreciation of jazz music.

Although this documentary mentions Hefner’s conflicts with feminists, conservatives and Evangelical Christians, and includes cogent comments from legendary Christian entertainer Pat Boone and conservative talk show host Dennis Prager, Hefner generally gets the last word. Also, except for a clip of Hefner debating feminists on the old DICK CAVETT SHOW back in the early 1970s, this movie contains no direct debate on Hefner’s final points in favor of the Sexual Revolution, marijuana legalization or “progressive” politics. It also contains several shots from PLAYBOY of full female nudity, many shots of upper female nudity and a shot of a PLAYBOY cartoon making light of incest.

Of course, the victims of Hugh Hefner’s awful legacy have not just been adults. No, the biggest victims of Hefner’s radical leftist paganism have been millions of murdered unborn children and young targets of pedophiles and other perverts. Hefner’s “Sexual Revolution” has also left millions of children in the inner city without fathers and millions of inner city mothers without adequate male support. This in turn has created a generation of fatherless gangbangers whose violence and drug deals have devastated the black and Hispanic population throughout the United States and Mexico. So much for this documentary’s vacuous veneration of Hugh Hefner’s civil rights “record.”