HUNT FOR THE WILDERPEOPLE

"Quirky, But Funny, Exciting and Endearing" 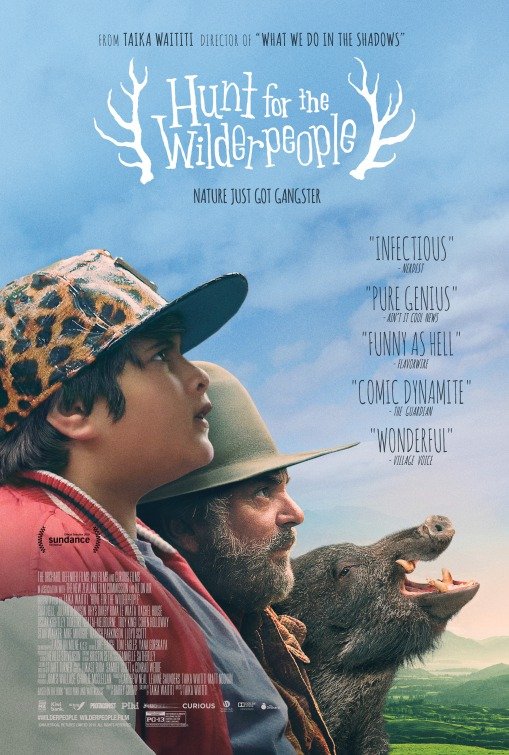 HUNT FOR THE WILDERPEOPLE is a comical adventure movie from New Zealand. A defiant, chubby young boy, Ricky, is sent to live in the wilderness with foster parents Aunt Bella and Uncle Hector. When wise, friendly Aunt Bella suddenly dies, Hector decides to give the boy back to child services. Fearful to return, Ricky runs to the woods to hide, but Hector finds him. After Hector injures his ankle, the two are forced to camp for a week. This gives the authorities time to conclude that Hector has kidnapped the boy. A wild manhunt ensues. Hector and Ricky must become like family to survive.

HUNT FOR THE WILDERPEOPLE is a delightful comic adventure, with many entertaining, funny, exciting, and touching moments. The performances by the main characters are top notch, as is the cinematography, which includes breathtaking shots of New Zealand scenery. HUNT FOR THE WILDERPEOPLE has a strong moral worldview with some overt Christian references to God and faith. However, MOVIEGUIDE® advises caution for older children, because of some foul language and intense violence, which includes scenes involving guns, fighting and hunting.

(BB, CC, LLL, VVV, S, D, M) Strong moral worldview with some overt, implied Christian, redemptive content promotes, love, compassion, family, foster mother welcomes rebellious boy into her home, foster father and boy sprinkle wife’s ashes throughout the forest, man and boy attend funeral at a church, priest says prayers over character’s coffin, boy buries family dog and has a moment of silence in honor of the death, woman mentions praying to God for a son; about 32 obscenities and profanities, plus boy gives an obscene gesture to the police twice and some scatological humor; strong, sometimes intense violence, sometimes with blood, includes fist fights, gun use, men punch, kick and hit each other, hunters carry guns with them and shoot at boy, boy shoots man in back, man shoots wild animals to eat, blood from animals is shed, man injures his leg and blood pours out, dog attacked by an angry boar with horrific bloody image of a dead dog, car chase; no sex scenes but there is a false accusation that older man is molesting foster boy under his care; no nudity; no alcohol use; light smoking includes man smokes cigarettes after long hikes, but no drug use; and, light miscellaneous immorality includes kidnapping, dysfunctional family portrayal, bad role models, stealing, and lying.

HUNT FOR THE WILDERPEOPLE is an entertaining adventure comedy based on a novel by Barry Crump. The movie is divided into ten chapters, giving it a playful, childlike feel.

The story revolves around Ricky, a chubby foster child who doesn’t seem to fit in anywhere. Feeling rejected by his birth parents, he’s been caught stealing, spitting, hitting people, throwing rocks; as a result. he’s been kicked out of every foster home. Paula, a hardnosed child services worker, drops Ricky off with a rustic family in the back country of New Zealand, giving him one final chance to shape up. If he doesn’t behave, his next stop is juvenile hall.

Auntie Bella, a sweet, plump and lovable woman, welcomes Ricky into her home with open arms. When Ricky runs away the first few nights (breaking the rules as he usually does), instead of getting angry she simply replies, “You can run away but let’s have breakfast in the morning.” She has a relaxed parenting style giving Ricky the freedom and permission to do as he pleases causing Ricky to lose interest in rule breaking. She teaches him the ways of the wild, showing him how to shoot wild pigs and skin animals. The beauty of the New Zealand forest around the isolated home, along with the love from Auntie Bella, help Ricky open up and grow to love his new home.

Tragedy strikes when Bella suddenly dies, leaving Uncle Hector in charge of Ricky. Hector wants nothing to do with Ricky and tells him child services will be coming to get him. A fearful and angry Ricky fakes his own death, setting the barn on fire and writing a fake suicide note. Ricky runs away with his dog, a birthday present from Auntie Bella, but after a couple days without food, water and shelter in the wild he becomes weak. Hector finds him sleeping in the woods. He informs Ricky that was the most amateur staged death he’s ever seen.

In his rage to bring Ricky back, Hector trips and sprains his ankle. Unable to move, he and Ricky camp together for a week in the woods, where they form an unbreakable bond. After Hector’s ankle heals, they pass a shelter on their way back home. When they arrive, they notice a poster crafted by the antagonist Paula that reads Hector has kidnapped Ricky and there is an award to return him. Hector, a former inmate, knows that with his record he’ll end up in jail and his word doesn’t stand a chance against the government.

From this moment, a wild manhunt ensues, as Hector and Ricky run from the authorities. They encounter a slew of ignorant hunters who try to capture them for the reward, a wild boar that almost kills Hector, a crazy man who wears a big thing of twigs around his back for fun, and a father and daughter team who open up their home to give Ricky a place to rest.

HUNT FOR THE WILDERPEOPLE is a delightful comic adventure, with many entertaining, funny, exciting, and touching moments. It has a quirky tone that’s endearing. The performances by the main characters are top notch, as is the cinematography, which includes breathtaking shots of the rolling greenery and majestic mountain ranges of New Zealand. HUNT FOR THE WILDERPEOPLE has a strong moral worldview with some overt Christian references to God and faith. However, MOVIEGUIDE® advises caution for older children, because of some foul language and intense violence, which includes scenes involving guns, fighting and hunting. There are a couple intense encounters with wild pigs.

Rent or Buy HUNT FOR THE WILDERPEOPLE: