I CAN ONLY IMAGINE

"God Can Transform Anyone" 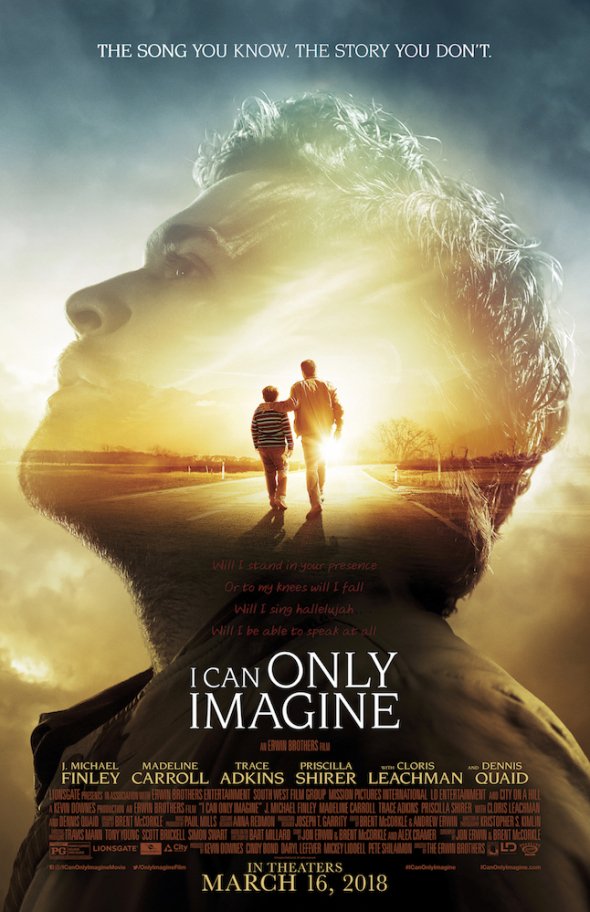 I CAN ONLY IMAGINE is the story behind the most-played Christian contemporary song, “I Can Only Imagine” by the band MercyMe. Since he was a young boy, Bart Millard’s father, Arthur, was emotionally and physically abusive. When Bart isn’t able to fulfill his own father’s dream of being a football star, Bart enters the world of music. Eventually Bart becomes so fed up with his father, he leaves for good and joins a band. The band struggles to find success. Bart realizes he needs to return home and somehow find resolution with his father, who’s dying. What Bart doesn’t know is that his father has found Jesus.

I CAN ONLY IMAGINE is a powerful, heart-rending story of redemption and reconciliation found in Jesus Christ. Dennis Quaid is terrific as Bart’s father. Bart Millard described his father as a monster and someone he hated, but who transformed into a man and who became his best friend and a role model. Void of objectionable content, I CAN ONLY IMAGINE warrants only a light caution for younger children because of tastefully executed abusive violence.

(CCC, BBB, V):
Dominant Worldview and Other Worldview Content/Elements:
Very strong Christian, Biblical worldview showing the power of Jesus Christ’s Gospel to redeem and reconcile, with strong redemptive themes of repentance, forgiveness and reconciliation, with strong Christian elements and references to prayer, church and worship;
Foul Language:
No foul language;
Violence:
Implied domestic violence discussed, a man smashes a plate against his teenage son’s head, a teenager breaks both his legs doing football;
Sex:
No sexual content;
Nudity:
No nudity;
Alcohol Use:
No alcohol use;
Smoking and/or Drug Use and Abuse:
No smoking or drug references;
Miscellaneous Immorality:
No miscellaneous immoral behavior or objectionable content.

I CAN ONLY IMAGINE is about the story behind the most-played Christian contemporary song of all time, “I Can Only Imagine” by the band MercyMe.

Bart Millard is an imaginative young boy in Greenville Texas, who loves to bike around and listen to cassette tapes. His home life isn’t so pleasant, though. His father Arthur (Dennis Quaid), who is troubled by his failure to achieve football dreams, is abusive towards Bart and towards Bart’s mother. One day Bart’s mother decides she can’t take the abuse anymore and leaves.

Years later, still with his father, Bart plays football in high school, but when he breaks both his legs, any thought of fulfilling his father’s dreams is crushed. Bart’s girlfriend Shannon prompts him to join the Glee Club, and he does. In the Glee Club, Bart’s teacher finds out Bart actually has a great voice, so she gives him the lead role in a musical against his wishes. When the day of the play comes, Bart doesn’t tell his father about it, for fear of being mocked by him.

Bart’s relationship with his father goes from bad to worse, and Bart decides that he’s done. So, he decides to leave his father and his girlfriend, Shannon.

By “chance,” Bart finds himself with a band and becomes their lead singer. The band, MercyMe, goes from show to show, but is still trying to find out who they are. Bart practically begs a famous manager named Brickell (Trace Adkins) to attend one of their shows. Mostly unimpressed, Brickell gives Bart some pointers and says there’s something special about him that Bart should tap into later.

When the band struggles to impress some record labels, even with Brickell’s help, Bart knows he must go home to resolve issues with his father. What Bart doesn’t know is that his father is dying from cancer and has found the Lord, but can Bart ever forgive his father?

I CAN ONLY IMAGINE is a powerful, tear-jerker story of redemption and reconciliation. A tremendous cast drives the emotion, from Dennis Quaid and Trace Adkins to terrific newcomer J. Michael Finley, who plays Bart Millard. Directors Andrew and Jon Erwin, thanks to their background making music videos, deliver their most resonant, effective movie yet. The movie is beautifully shot and well structured, despite speeding through Bart’s younger years a bit too fast.

Best of all, I CAN ONLY IMAGINE promotes the theme of forgiveness, redemption and repentance that can be found in Jesus Christ. Bart Millard described his father as someone who was a monster and someone he hated, who transformed into a man who became his best friend and a role model. This change of heart for Arthur Millard not only reconciles the father and son, but it becomes an inspiration point for Bart’s vocational calling as a musician. Finally, the change of heart inspires a song, “I Can Only Imagine,” which goes on to touch and inspire millions of people. The same perhaps will be said in future years about this movie.

I CAN ONLY IMAGINE is void of objectionable content. For the most part, the abusive moments are all implied, with the exception of one outburst. The movie tastefully handles the topic without becoming too dark, and some humor scattered throughout the movie keeps it from becoming bleak. A light caution is advised for younger children.

Rent or Buy I CAN ONLY IMAGINE: